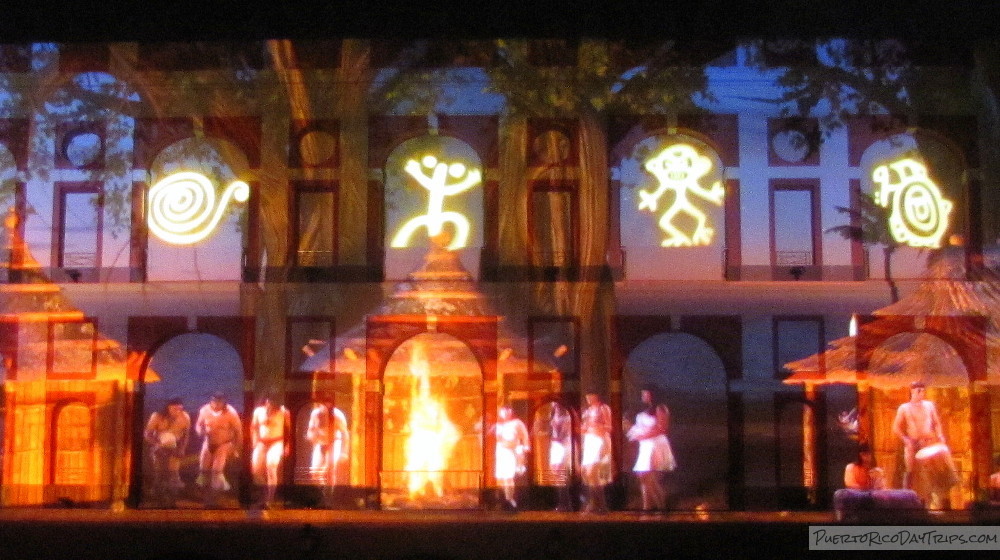 2/20- the show is NOT running at the moment, hopefully it will be repaired soon. I will update when I hear it has restarted. 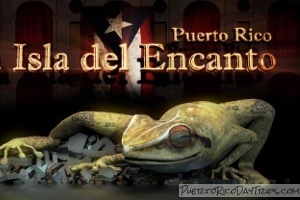 Old San Juan at night is a different place than it is during the day. The songs of the coqui echo in the plazas, and the buildings glow with lights, creating a different feeling altogether.

The Cuartel del Ballaja is now decked out in lights — the outside glows with different colored lights, luring you in to see the real show … a 3D projection mapping film called Puerto Rico, La Isla del Encanto. The film is projected onto the walls of the courtyard, creating an amazing show of light and sound.

Technologically, it is a state of the art film process called Ultra HD 3D Projection Mapping. I am not sure how it is done but boy what an amazing thing to see. The process creates 3D-looking scenes that mix animation and real images. The result is projected onto the top 2 floors of the far wall of the courtyard in the 160 year old Cuartel de Ballaja (barracks).

The creative use of the lights and film sometimes uses the architecture in the scene, and other times hides or totally reconstructs what you are seeing to a whole new look. The state of the art sound system provides a background soundtrack throughout the show.

The lighting alone is great, and I think that people of all ages will love it. The show tells the basic story of Puerto Rico, from its fiery volcanic origins, to the indigenous peoples, to the arrival of Columbus, to the slavery, on up to the present day. It depicts some of the culture, and the beautiful and famous people and places around Puerto Rico.

We should point out that our photos here do not do justice to what you will see in person.

They have two soundtracks for the narration — one in English and the other in Spanish. They try to alternate the language from show to show throughout the evening (depending on the audience). In reality, there isn’t a lot of narration throughout the show. So even if you catch the show in a language you don’t understand, I think you will still really enjoy the show — you will "get it" just from the scenes.

They set up folding chairs in the open-air courtyard, so there’s the chance that the show could be delayed due to rain. The show itself is about 17 minutes long.

They light up the inside of the Ballaja between shows with a changing rainbow of lights, so it’s even enjoyable while you wait for the show to start.

Amazingly, the show is FREE! It really is a must see for locals and tourists alike.

They sometimes post the show schedule on their Facebook page, so you can check there for up to date info.

The coqui photo at the top of this article is from Tony Miceli Creative.