Spend a Day at the Cibuco Historical Center in Corozal

Posted by Gwenn • Updated on 19 Oct 2020
Category: History, Museum, Porta Cordillera (Central)
Print This Without Photos
+ Print This With Photos 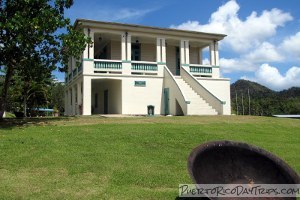 I love it when you explore some place new and you are happily surprised with the outcome. That is what happened to us on a recent visit to the Centro Histórico Turístico del Cibuco (Cibuco Historical Tourist Center) in Corozal.

We had heard that they offered a tour of this park, but we had no idea what a gem this place was. There is something for every family member packed into this lovely place.

In the early 1900s, the US government was offering incentives in Puerto Rico to encourage sugar cane farming and the production of sugar products. In 1914, in order to take advantage of those incentives, Genaro Bou Galí combined two former fruit farms into one hacienda (totaling 65 acres) and immediately planted it with sugar cane. He registered the name Melao de Cana "Cibuco" and started producing molasses under that label.

In 1939, he built a house on the land for his daughter, Aurora. Aurora raised her family in that house. Later, her parents moved into an adjacent building on the hacienda.

Aurora inherited the hacienda in 1960, and later sold it.

In 1992, the town of Corozal bought 30 acres of the original hacienda, and a few other surrounding properties, to make this historical park.

When we arrived at the park, the place looked empty and we we were concerned that we drove all the way there for nothing. But the lady at the front gate (where you pay your entrance fee) called the tour guide for us. Our tour guide, Anna, met us in the parking lot and took us to the house to begin our tour. Lucky for us that Anna was working that day — she is the park’s only bilingual guide. 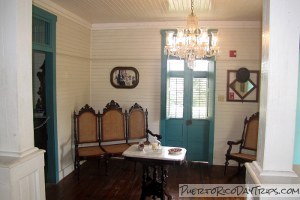 The original house was destroyed by Hurricane Georges in 1998. The existing house is a re-creation, though the beautifully tiled proches are original. The house is furnished with period furniture, though it is not original to the property.

Anna spent some time talking about the family, the house and the history of the property. She took us through each of the rooms and explained which of the family members used which room. 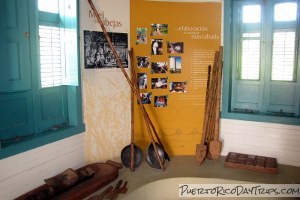 Next to the main house, Genaro Bou Galí made an addition so that him and his wife could live close to their daughter in their old age.

Today, that addition houses a collection of artifacts and information related to the sugar industry in Puerto Rico. Again, the printed information was all in Spanish, but Anna took the time to explain each of the displays to us.

This little "museum" was chock full of information relating to sugar, slave trade in Puerto Rico, and the types and locations of sugar mills throughout Puerto Rico in each stage of the island’s history. Here, and throughout the property, they have pieces and parts from many sugar mills that were located around the island.

After we finished with the house and museum, Anna led us past the bronze statues, Nuestra Herencia, which represent the ancestral roots of the Puerto Rican people — the Spanish, African slaves, and the Taino Indians. 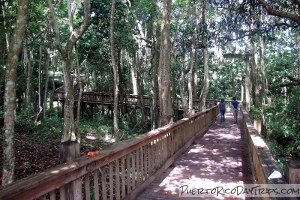 In the distance, behind the statues, you can see a cave, Cueva los Quinteros, in the side of the cliff face. Anna told us that petroglyphs have been found in that cave. But, sadly, the only way to reach the entrance to the cave is by rappelling down from above it.

Next, we boarded a trolley that took us past a playground and picnic area, and then on to the petroglyph area. They have made a beautiful, nature boardwalk that leads down and around to where you can see huge boulders with carvings on them. Anna talked about the trees in the area and their uses — medicinal, construction, etc. 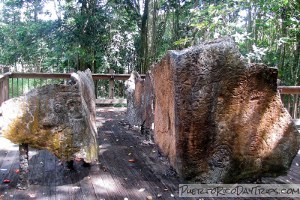 However, they did the next best thing — they made molds of the original petroglyphs, and they have reproductions of the rock faces on the wooden deck. That allows you to get up close and personal with each of the etchings.

Anna explained how the chief and high priests woud come here and talk with the spirits and Taino gods, and carve the things they saw. 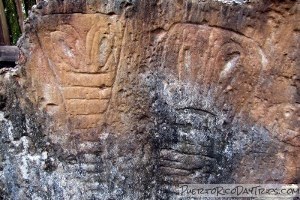 There are 2 carvings that are unique to the area, and they bear a remarkable resemblance to how aliens are usually depicted in the movies. Maybe they really did see something from out of this world!

After we finished looking at the petroglyphs, we continued on the boardwalk and returned to the trolley. Then we were whisked off to an area that is planted with sugar cane. Here, they have two different types of sugar presses — animal powered and electric powered. The electric press was originally used in a sugar mill in Bayamon.

Sometimes, during busier times of the year, or when they have a group of school kids on a tour, they will actually press the sugar cane to get the juice. 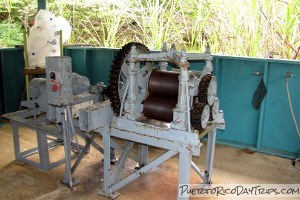 They weren’t doing that the day we were there, but Anna turned on the electric sugar press so we could see how it worked. Then she gave us some (previously squeezed) sugar cane juice (or Gurapo) to try. It was sweet and natural tasting … an interesting flavor.

Next, the trolley took us past a little lake, where you can and use the free paddle boats. The boats and lake were being refurbished this day, but, even from the road, we saw turtles, birds, and iguanas. It was very pretty. And they let people reserve the picnic pavilion for free! Finally, the trolley made a complete loop around the property, and were back in the parking lot where we started.

All in all, it took about one hour for the tour. But people, especially a family, could really spend some time enjoying the playground, paddle boats, and picnic area. There is also a restaurant on the property. I was really pleased with this park — it was educational and beautiful. 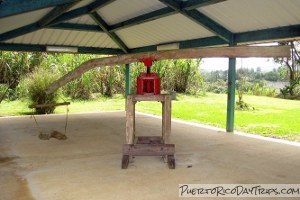 The park is open Thursday to Sunday, and some holidays, from 9:30am to 4pm.

Allow a minimum of 1 hour.

Every year, on the second weekend in July, they hold an Agricultural Fair (Feria Agricola Artisanal de Cibuco), featuring artisans, food and music.

They had clean bathrooms in a couple locations throughout the park.

Travel time from the San Juan metro area is about 45 minutes. Allow a little extra if you’ve not driven much in Puerto Rico before.