Posted by Gwenn • Updated on 12 May 2022
Category: History, Museum, Nature, Porta Cordillera (Central)
Print This Without Photos
+ Print This With Photos 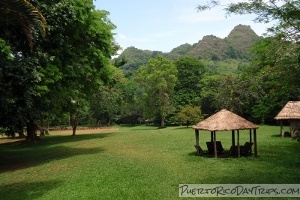 If you take a trip to the Caguana Indigenous Ceremonial Park (or Parque Ceremonial Indigena de Caguana in Spanish) in Utuado, you can learn about the people who lived in Puerto Rico (or Boriken as they called it) prior to the arrival of the Spanish. In this a small area, archaeologists have uncovered many artifacts, petroglyphs and a number of stone-lined areas.

Many years later, after further excavations, research and preservation, this area (now operated by the Institute of Puerto Rican Culture) is said to be one of the most important Taino-culture archaeological sites in the Antilles today.

History of the Caguana Ceremonial Park

According to the archaeologists and anthropologists who have studied the ancient culture of Puerto Rico, most agree that the Tainos, as a cultural group, date from the year approximately 1000 – 1100AD to the beginning of the 15th century (when the Spanish arrived). Sadly, the Tainos were swiftly and almost completely decimated by disease and Spanish subjugation.

In an odd twist of fate, some of the original Spanish did write about aspects of the Taino culture and customs they saw upon arrival. Now, with the Taino people gone, those writings give us much of the knowledge we have about the culture. 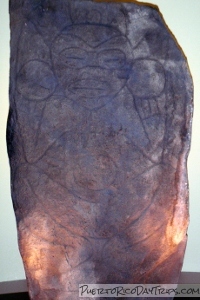 There seemed to be an archaeological boom in the early 20th century. After word spread of possible ancient cultural finds in the area, Dr John Mason came from the States and began excavations in the area in 1915. He made detailed maps of the area and descriptions of his findings. However, they did not preserve the findings or petroglyphs and the site was left to be reclaimed by nature.

In later years, other archaeologists came to the site and re-excavated. They have uncovered 10 ceremonial plazas (sometimes referred to as batey), many wonderful petroglyphs and other artifacts.

There have been a few archaeological findings in the park (pieces of pottery) from proto-Taino (before the Taino) cultures, but it looks like the area was mainly used by the Taino people. The ceremonial plazas were thought to be constructed by the Tainos and used for about 300 years (until the Spanish arrived).

In 1957, the government of Puerto Rico "acquired" the land from the farmer who owned it. Since then, they have excavated and restored the site, added a museum and made the area into a beautiful park.

A Visit to the Park

As you enter the park, you walk down a tree-lined path, past picnic shelters until you get to the visitor center where, upstairs, you’ll find a large petroglyph on display. This petroglyph is etched in limestone, unlike the rest that are etched in granite. Since limestone is so soft, it was moved indoors from the plaza to help protect it from the elements. There are also some beautiful views of the ceremonial plazas from the upstairs balcony.

Downstairs, you’ll find a desk by the museum entrance, where you pay your admission and get a written brochure about the park and the excavated findings. It is available in English, Spanish and a number of other languages. There is a small, but interesting and air-conditioned, museum that has a lot of information on the artifacts on display. The informational placards are bilingual (English/Spanish). It also has a beautiful recreation of La Mujer de Caguana (the Woman of Caguana) petroglyph. She most likely represents Atabey, the Taino goddess of fertility. The real one is out in the largest ceremonial plaza. 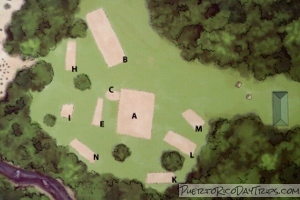 From the museum, you can gain access to the grassy fields and the ceremonial plazas. There are 10 plazas and 21 well-preserved petroglyphs out there. The largest plaza is where most of the petroglyphs can be found on the large rocks lined up along the far edge. The petroglyphs are well preserved and easy to see.

Though no one really knows the purpose of the plazas with 100% certainty, there are theories about how they were used. It is theorized that the largest, central plaza was for important ceremonies. There is a horseshoe-shaped plaza to the side of the largest plaza that is believed to have been a dance area. Surrounding the central plaza, you will find almost a semicircle of other small plazas and one medium-sized one. These smaller plazas are thought to be where the Tainos used to play a ball game called batos. These plazas are sometimes called bateyes. The smaller ones may have been practice fields, while the medium-sized one may have been the real ball field.

Note that the grassy areas and access to the bateyes are sometimes closed off if the ground is too wet from recent rain. That was the case the day that we went. 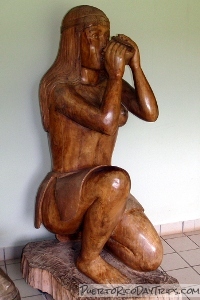 It is believed this site was specially chosen and considered sacred by the Tainos. If you take a look at the surrounding mountains, you’ll notice that the mountain ridge-line has a distinctive shape — the mountains have the shape of a cemi. The cemi was the name of the physical representation of the Taino dieties or gods. They were also associated with fertility, both human and agricultural. Tainos considered cemis very powerful objects of spiritual value.

You will also notice the well-maintained grassy areas and large, beautiful trees in the park, many of which are endemic to the area and important to Taino life. The Institute has recreated a Taino bohio (shade structure) for visitors to use to sit and enjoy their time in the park.

All in all, Caguana is a lovely and important site that is part of the Puerto Rican cultural heritage, that I am glad has been preserved. I think the Institute of Puerto Rican Culture is doing a wonderful job at this site. The National Park Service has placed it on the National Register of Historic Places, and it is designated as a National Historic Landmark.

The Icing on the Cake 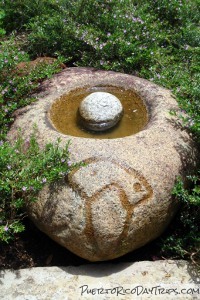 The park itself is lovely, but the best part of this park was the museum guide. But latest reviews say there are no guides anymore.

The admission fee allows visitors to enter the small museum, see the 50-minute documentary (in Spanish, only) if they like, and grants access to the archaeological area. Prices are $5 for adults , $3 for kids ages 6-13 (cash only).

On days when the ball fields are too wet (and therefore closed), entrance to the museum is free. 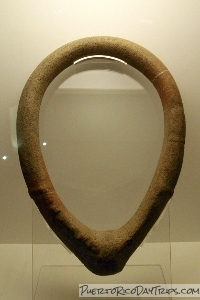 The museum area is wheel chair accessible, but the ceremonial plazas are not. There are restrooms at the edge of the parking lot and in the museum.

Allow about 45 minutes to see the museum and plazas. Add another hour or so if you want to watch the 50-minute movie (in Spanish, only).

You can call them for more information or reservations at 787-669-1866. Check their Facebook page for latest updates.

The park, located in Utuado, it is a bit off the beaten path, but a nice stop. The drive down Route 10 is beautiful, with the haystack magote hills. The sheer limestone rock cliffs are fantastic.

The drive to Caguana from the San Juan area takes approximately 90 minutes.