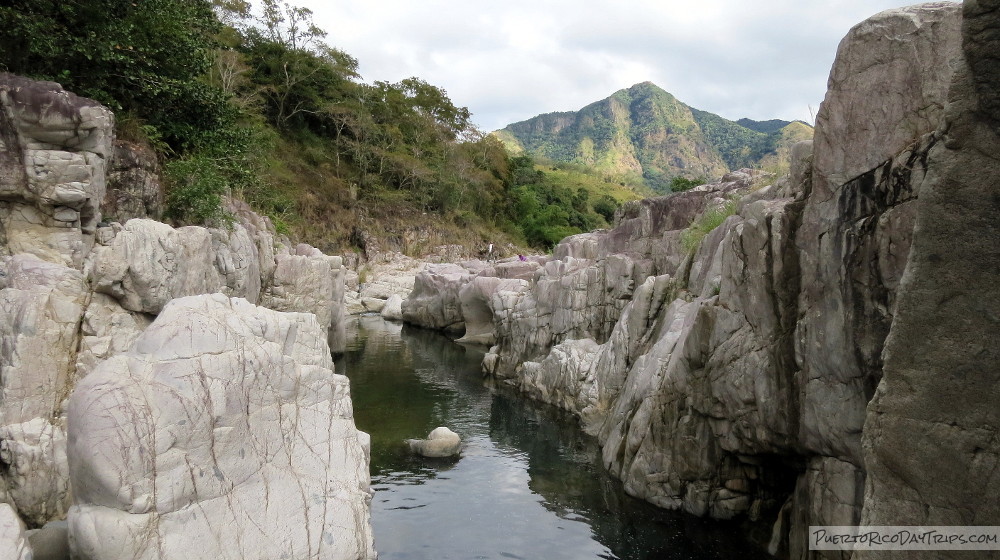 Posted by Gwenn • Updated on 05 Nov 2022
Category: Nature, Porta Cordillera (Central)
Print This Without Photos
+ Print This With Photos

11/22 – This area recieved a lot of damage from Hurricane Maria, the bridge was really messed up. Last I heard they were working on it. You should be able to park before the bridge and go down river to see the canyon/petroglyphs.

When I first saw the photos of Río Caonillas, I assumed it was not in Puerto Rico because it looked so much different than anywhere else on the island. Beautiful barely describes the area. I had to find this place and see it in person.

It has a mystical feel to it. The river, the large rock cliffs, the majestic mountain in the distance. It is really inspiring. I don’t think that I am the first person to feel this way … In numerous places along the river you can find a number of beautiful pre-Columbian petroglyphs carved into the rocks. It must have meant something special to those people who took the time to make those etchings. Of all the places I have been in Puerto Rico, this is one of my favorite spots. 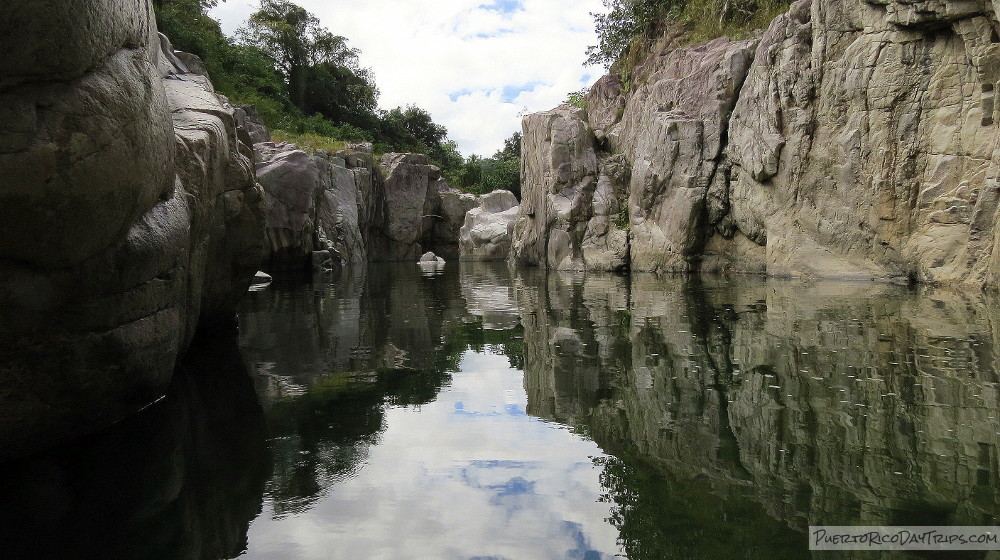 You gotta love social media … you can discover all sorts of new places to visit. When I saw my first photo of this area, it piqued my interest. I was able to get a general idea of where it was. So we took a trip to do some recon.

On our first visit, we parked way up-river and had to walk down-river about an hour, until we came to a bridge … which is where we should have parked and started from in the first place! On that day, the skies were ominous, so we didn’t venture too far, as we didn’t want to be trapped in the canyon during a flash flood. I had read there were 2 canyons and the petrogylphs were around those areas. We made plans to go back! 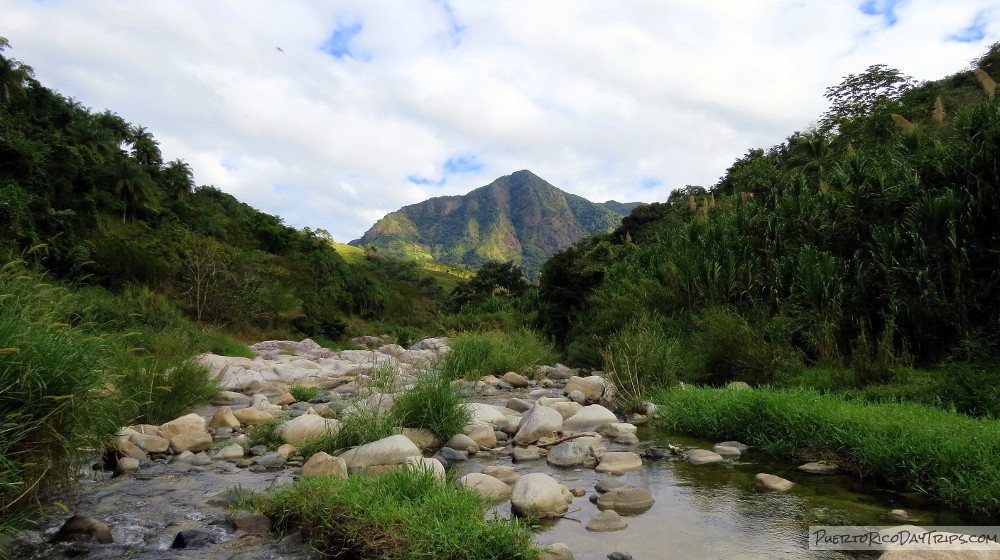 On our second trip, we parked at the old bridge “starting point”. We first noticed the the large rock with 3 dark lines running through it just upriver from the bridge. There are some petroglyphs on it, mostly faces. Then we went down-river.

The first part of the river is easy enough for almost anyone to do – it is just walking in the river for maybe 5 minutes, and looking for petroglyphs on the large rocks. You can see the mountain (Cerro Morales) just after you come around the first little curve in the river. It’s picture perfect.

We explored the rocks up-river from the canyon and found lots of well-preserved petroglyphs. When you get to the canyon (Canon Blanco) (maybe another 5-minute walk), you have to be very careful as the rocks are a bit slippery, and a fall could be treacherous. The walls of the canyon are about 25 feet tall in areas.

It is very impressive. The water has carved out smooth vertical walls, sometimes leaving large monoliths in the middle of the river. And there are a number of little waterfalls as the river makes its way through the canyon. We couldn’t stop taking photos.

This canyon part is a little more tricky and not meant for people who can’t climb rocks.

Once through the canyon area, it flattens out and the river meanders for a while. We walked this flat river for another 45 minutes or so … there’s not much to see here. There were some farm animals grazing along the river banks.

Eventually, we arrived at the second canyon. Unlike the first canyon, the petrogyphs in this area were right on the canyon walls and tops of the walls. We found just a few on the rocks around the river before the canyon. We explored a bit here going farther down-river, and found a really nice charco (pool) of water for swimming and then a waterfall. After the waterfall, we turned around and headed back toward the car. 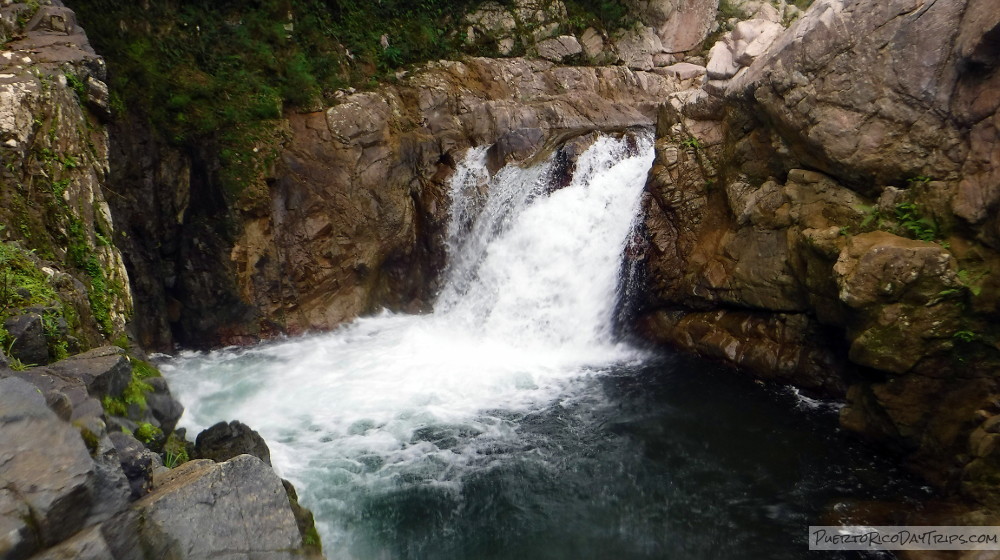 Instead of walking back up-river, we decided to take the road back to our cars … it is very close to the river, near the second canyon. There is a woman who has a farm there, and she volunteered the use of her “trail”. (My friend told me about her, but we decided to explore the river). She also suggested where we should park next time to avoid all that flat-river walking. Note that even if you park at her place, you will require about 15 minutes of walking down-river before reaching the second canyon area.

Of all the places I have been in Puerto Rico, this is one of my favorites. It is so beautiful, and it has almost a spiritual quality. An interesting thing that we noticed is that all of the petroglpyhs we found are on the left side of the river (looking down-river). I’m not sure if there is any significance to that, but maybe there is. We’ll never know! 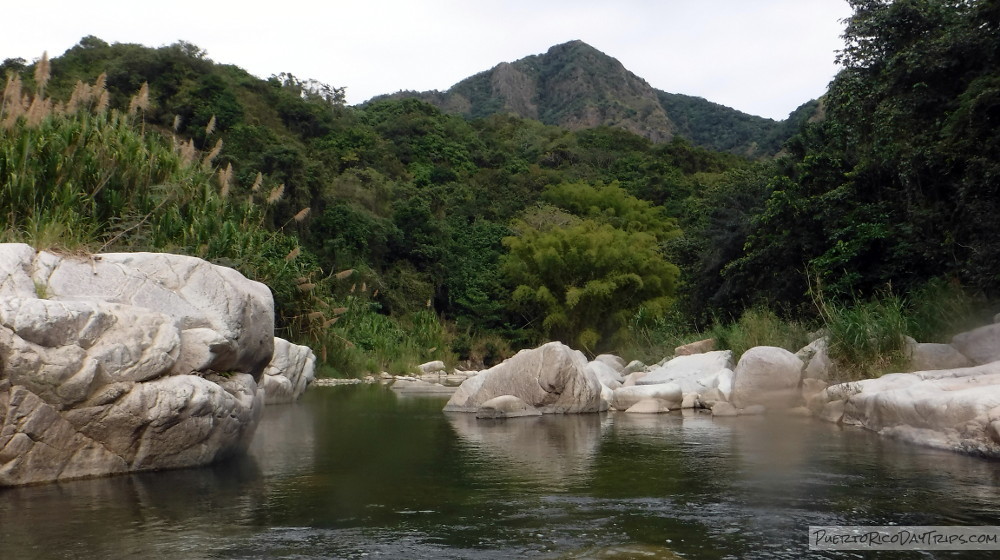 Wear good shoes that have grip (are “sticky”) on wet rocks, long pants/sleeves (there are thorns and sharp grasses to walk around/through in some areas). Other gear that would be good to have includes helmet, personal flotation device (life jacket), knee pads, gloves, hat, and sunscreen.

This river can rise A LOT, and quickly. While walking along the tops of the canyon, we could see debris deposited at the high-water mark … 20 feet or more above the normal level of the river. A rainy day is a BAD day to go exploring in this river.

We strongly recommend AGAINST swimming in any of the canyon areas. In an emergency situation, the high walls would make it very difficult to get out of the river, or perform any type of river rescue.

From the San Juan area, take Route 22 west to Route 10 south to Route 111 east to Route 140 south. Continue on Route 140 to KM 15 (near the intersection with Road 606). Immediately after the KM 15 marker, you will turn a SHARP left down a hill. Take that to the bridge and park. Or continue over the bridge and go a little bit you will find a nice parking area that will let you enter the “sofa” area via land.