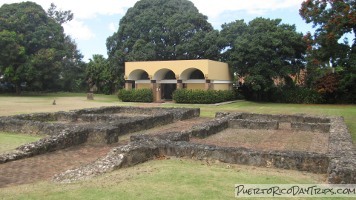 Due to COVID- This museum is only open by appointment.

Puerto Rico has a long and interesting history. The Spanish settlers made this their home more than 500 years ago, and you can see the archaeological evidence of the first settlement at the Caparra Ruins Museum and Historic Park. Now, before you get all excited, this is not what I call a must see place. But if you are in the area and have a few minutes to spare, you could stop in and check it out.

The Caparra Ruins (formally the Museo y Parque Histórico Ruinas de Caparra) is located in Guaynabo, a town just south of San Juan. It is a small but important spot that has been set aside for its historical significance.

Juan Ponce de León arrived with the first settlers from Spain in 1508. They created the first permanent Spanish settlement in this "Caparra" area in Puerto Rico. They decided on this site because it was close to fresh water springs and gold mines. Most of the town buildings were constructed of wood. But Ponce de León’s residence was more of a fortress (to protect townspeople from attacks), so it was made from rock.

It didn’t take too long before they realized that this location was not as ideal as first envisioned — it wasn’t close enough to the coast. Travel to and from the port for supplies was through swampy areas, where they were easy targets for the natives. Also, being near the swamps, they were subjected to mosquitoes (and the malaria they carry). In 1519-21, they moved the settlement to a site originally called "Puerto Rico" (rich port). Today, we call that area Old San Juan.

In 1917, during the construction of Route 2, the ruins of Caparra were uncovered. But it wasn’t until 1935, when a real archaeological excavation at the settlement was done, that foundations of the Ponce de León house were discovered. All the other town structures, being constructed of wood, had long since disappeared. 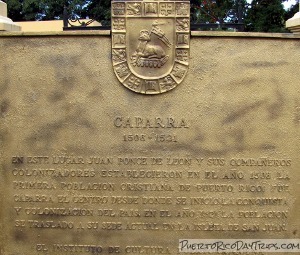 Nothing was done with these discoveries until 1958, when the land was given to Institute of Puerto Rican Culture, at which point excavation continued and other archaeological pieces were found.

Today, the foundation of the house and grounds are maintained, and a museum displays some of the items they found at the site. Additionally, other historic and archaeological objects and documents related to the conquest and colonization of Puerto Rico are on display. This park was listed on the United States National Register of Historic Places in 1984.

The ruins of Caparra have been on our to do list for a long time. Every time we drive past it we say "We should really stop in there" … so we finally did. 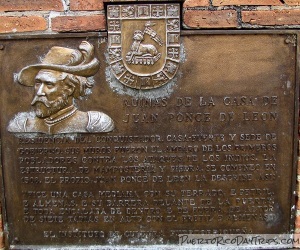 The ruins and museum are right along Route 2 in Guaynabo, so it is easy to find and there is a parking lot right at the museum.

As you walk in the gates, you see a large placard that describes the rock foundation of Ponce de León’s house. The placard is in Spanish, but luckily the guard came over with a Spanish/English brochure. It is less than thrilling to visit, but it is historical.

After walking around the foundation, we went into the museum. It is very small (one room) but there is a lot of information on what they believe the original settlement looked like (based on similar settlements in the Dominican Republic). All of the written descriptions inside the museum are in Spanish. The guards/curator tried to help with the explanations in English. 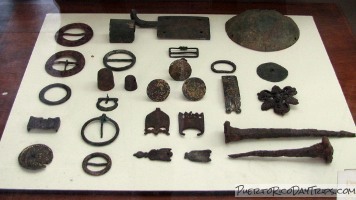 There were a number of historical documents, and some of the items that were excavated from this site and other places around the island. Items on display included broken pottery, ceramic tiles, metal items (buttons, buckles, nails, etc), and implements of war (swords, armor, etc).

The guide that was there only spoke Spanish, but sometimes there is a bilingual guide on duty.

Back outside, next to the museum, is a plaque designating the location of the first church in the Americas, established in 1512. Since the church was constructed from wood, the archaeological excavation did not reveal any remains from this building. 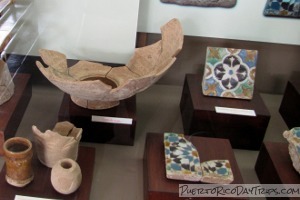 Admission to the grounds and museum is free.

The grounds and museum are open.

This is a quick stop … allow maybe 30 minutes.

The Ruins of Caparra are located in the Villa Caparra sector of Guaynabo on Route 2 westbound, around KM 6.4, just west of the intersection with Route 20. From Route 22, you would take Exit 6.