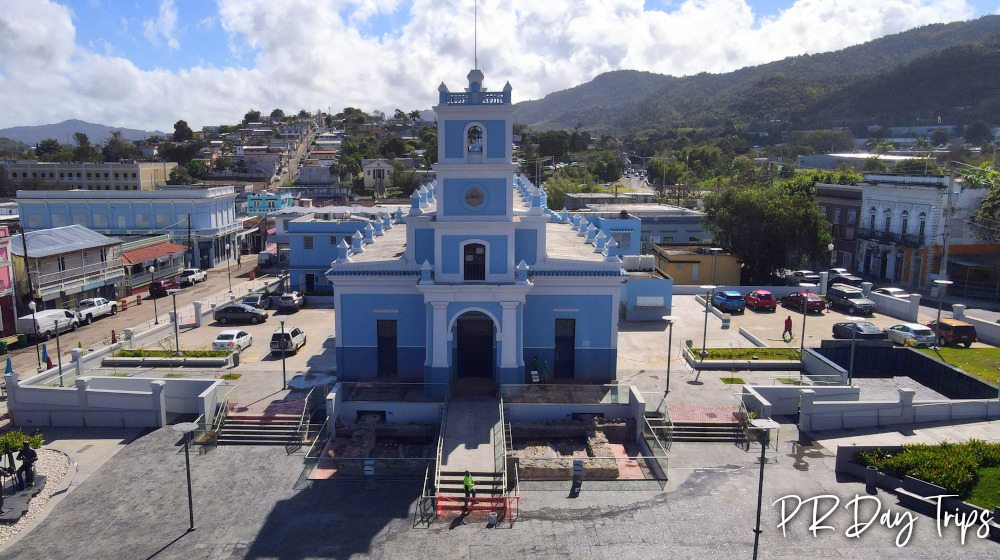 Cayey is a pretty town in the east central area of Puerto Rico. The town was officially founded in 1773, though people lived there long before that. Back in the day, the town plazas across the island were the main place for people to meet, shop, worship, do business — basically the center of activity. As in most towns, Cayey’s main church is located on the plaza, where you will see the beautiful Spanish Colonial style Iglesia de Nuestra Señora de la Asunción. The original plaza was built between 1850 and 1853. 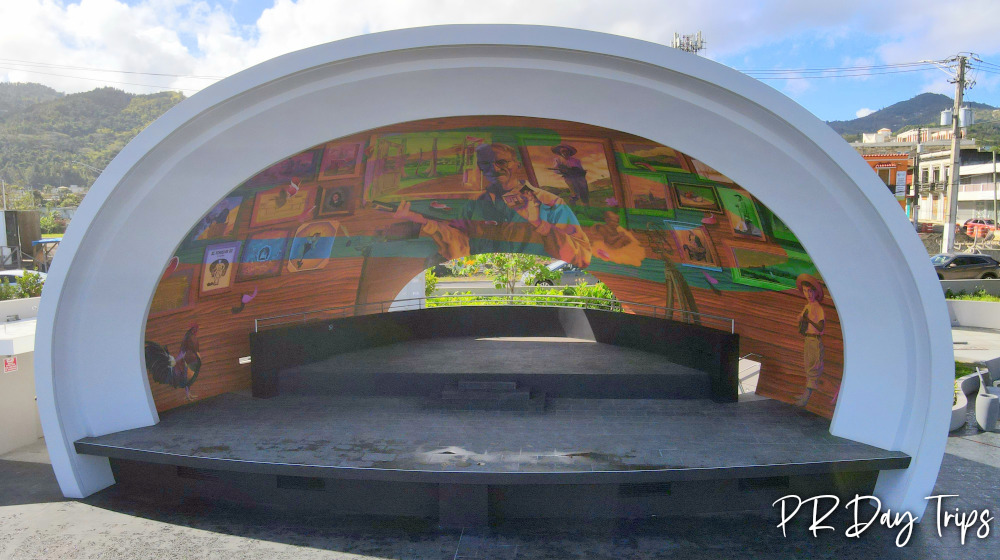 In 2016, they started renovation of the Cayey town plaza. While it is still under construction, it should be completed soon — they have made it a lovely area. You will see a beautifully painted amphitheater (La Concha Acústica) for entertainment, an old-fashioned carousel for family fun, a sculpture dedicated to famous Cayey painter Ramón Frade León and his work “El Pan Nuestro”, and a large open area with room for concerts, festivals and education. Plus concession stands for refreshments. The plaza is officially now called La Plaza Pública Ramón Frade de León, and has been modernized with solar-powered lighting, security cameras, and free broadband internet access. A real nice place to visit. 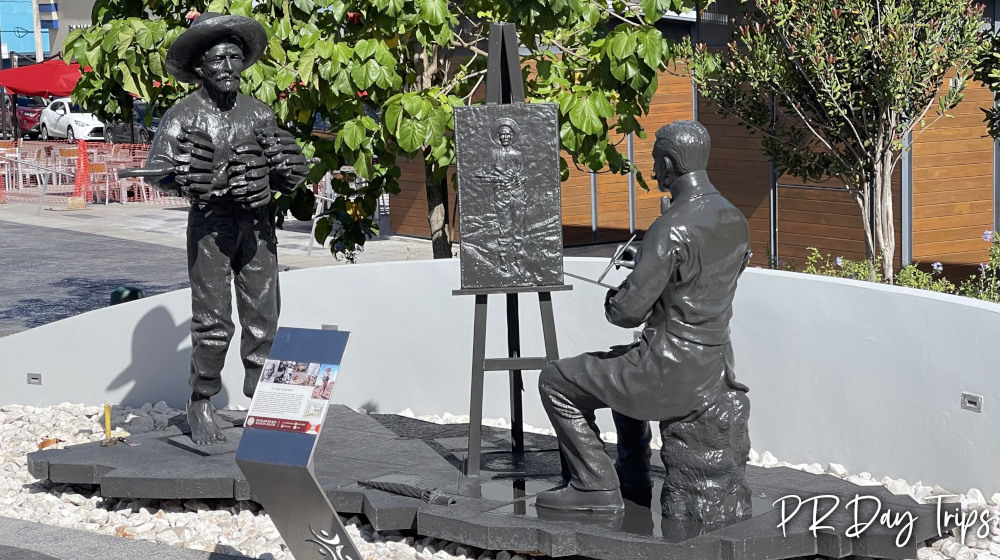 But probably the most interesting feature (at least to me) of this renovation is the archaeological discoveries and display of the original foundations and graves. They made a full exploration of the findings, made replicas of some of the skeletons/burials they found, and then made a nice walkway and display area with educational placards describing the findings, and left it open for all to learn. Super interesting stuff, but the placards are all in Spanish. Here is some of the more interesting stuff I could find. 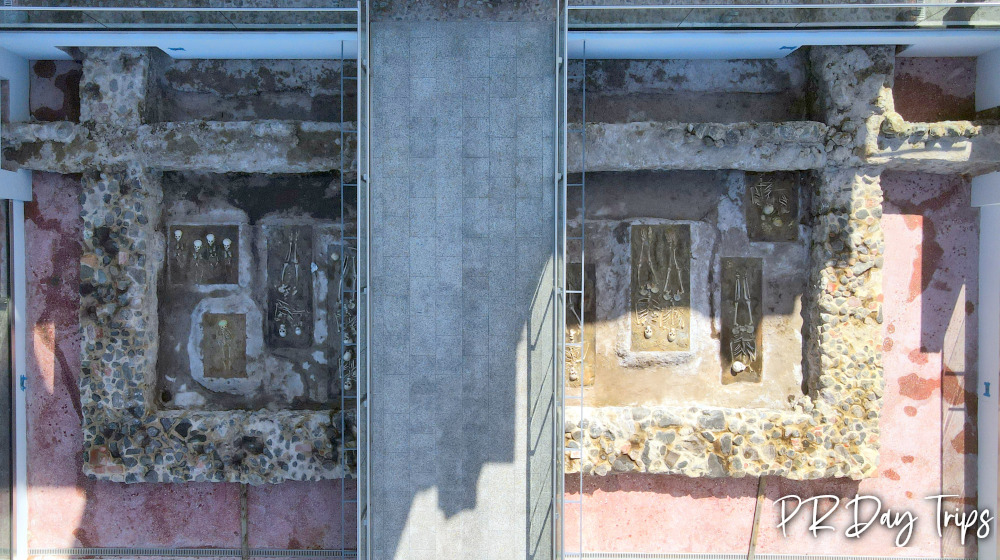 In 2016, while remodeling of the public square, foundations and drainage system were discovered right in front of the church. The stone/mortar foundations are believed to be from the original church that was built before the current church. In the drainage systems they found things such as bottles, utensils, and clay-ware. In 2019, during continued excavation, an old cemetery was found around and under some of the foundations and walls. 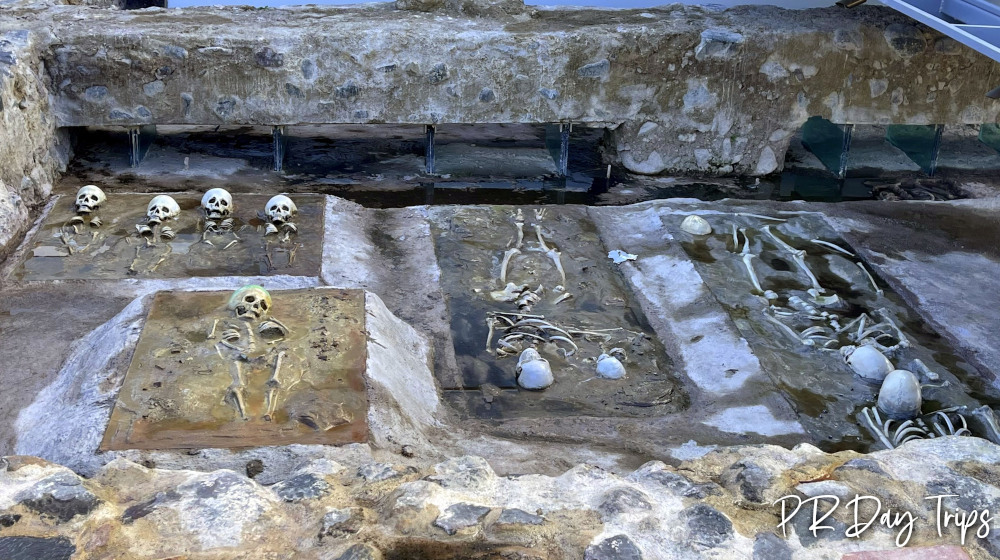 They found the remains of somewhere between 300 to 500 people. The people were mostly Europeans, though archaeologists found some were Taino and African (which they can tell from the teeth). Most of the remains are assumed to be from 1600-1700s though some were more recent. These are probably the original inhabitants of Cayey buried before Iglesia de Nuestra Señora de la Asunción (Church of Our Lady of the Assumption) was built or soon afterward. But it is possibly the graveyard of an original hermitage on the same site, assuming they kept with the custom of giving people a Christian burial near a church yard.

The designers did an amazing job, making an area where visitors can see the detailed reproductions of the findings. With transparent barriers, and an elevated walkway where you can really see into the past. They made the sites “as they were found”.

The adults were laid to rest facing the church, while children were buried facing away from the church. There is one grave with 3 people in it — possibly an entire family. One with a mother and child together. One with 4 children laid side by side. All very interesting. 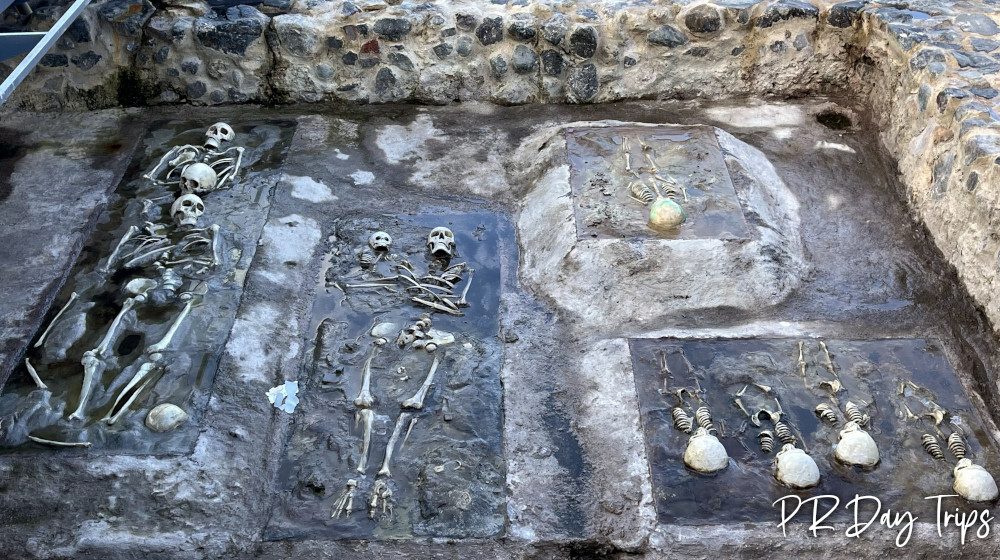 They hope to finish examining all the materials they found, and put them on display somewhere. The excavated bodies where removed and reburied with honor. You can see the original “photo” of what they found and the memorial on the south side of the church.

There is no cost to visit the Cayey Town Plaza.

Currently, while under construction, the direct access to the plaza it restricted. The church/grave area can be accessed by going in on the sides of the church.