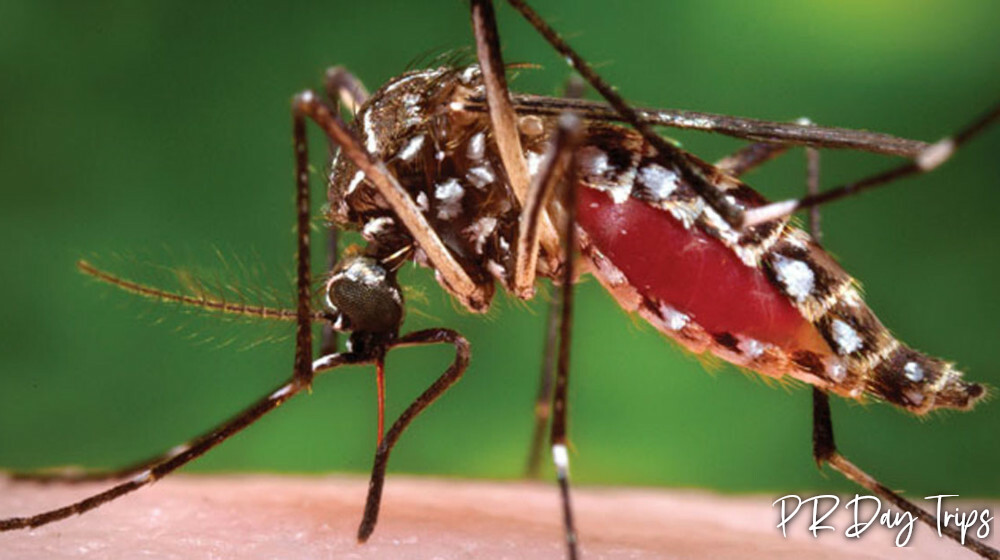 Chikungunya – What You Need to Know

On 29 May 2014, the Puerto Rico Department of Health (Departamento de Salud) reported the first case of the mosquito-borne Chikungunya virus in Puerto Rico.

Just a few months later, cases are greatly diminished, but the virus is still around but chances of acquiring it are very low.

Chikungunya was primarily found in Africa and Asia, but started spreading in the Caribbean in 2013.

If you have plans to travel to Puerto Rico you might be concerned. But, before you get all freaked out, do a little research, and understand the facts.

Chikungunya (pronounced chik-en-GUN-ye) virus (abbreviated CHIKV) is a disease transmitted to humans through the bites of infected mosquitoes. It causes fever and intense joint pain. The virus alone is seldom fatal, but the symptoms can be severe and disabling. 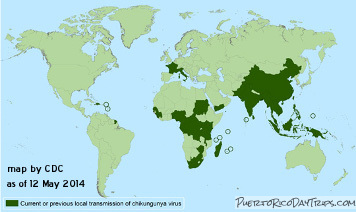 Chikungunya is endemic in Africa, the Indian subcontinent, and Southeast Asia, but recent outbreaks have spread the disease over a wider range. In December 2013, Chikungunya was confirmed on the Caribbean island of St. Martin, and it has since spread throughout the Caribbean — including Puerto Rico. Chikungunya virus may be introduced into areas by travelers who become infected while visiting other areas where the virus exists.

How is Chikungunya Spread? 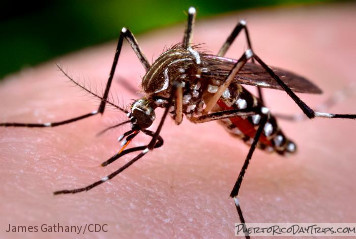 Here in Puerto Rico, Aedes aegypti is the principal mosquito carrier of Chikungunya virus. This species of mosquito is closely associated with humans and their dwellings. They like to live and breed in a place that is close to their food source — humans — and generally in urban areas, where there are more people available for them to bite! Aedes aegypti prefers to rest in darker cool areas, such as under furniture and in closets — convenient for them to bite people indoors and/or around the household and yard.

What are the Symptoms of Chikungunya?

Chikungunya is characterized by the abrupt onset of fever, often accompanied by severe joint pain. Other symptoms may include headache, muscle pain, joint swelling, or rash. Symptoms typically appear 2 to 12 days after being bitten by an infected mosquito. Symptoms last about a week, but the joint pain may persist for weeks or even months.

The symptoms of Chikungunya are similar to the symptoms of dengue (which we also have here in Puerto Rico), so it is possible to mis-diagnose the disease. 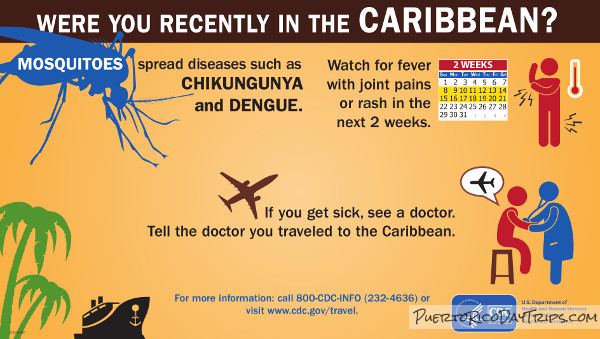 What is the treatment for Chikungunya?

See your doctor if you suspect that you have Chikungunya, and tell your doctor that you recently visited the Caribbean.

There is no specific medication for treatment of a Chikungunya infection. People who think they have Chikungunya should use ibuprofen, naproxen, acetaminophen, or paracetamol, to relieve fever and pain. They should also rest, drink plenty of fluids, and consult a physician.

How to Prevent Chikungunya

There is no vaccination to protect you from Chikungunya. So the way to prevent the virus is to prevent getting bitten by an infected mosquito in the first place.

The adult mosquitoes feed (bite) inside a dwelling as well as outside near their “homes”, during the day and at night when the lights are on. To protect yourself, use repellent on your skin while indoors or out. When possible, wear long sleeves and pants for additional protection. Also, make sure window and door screens are secure and without holes. If available, use air-conditioning. 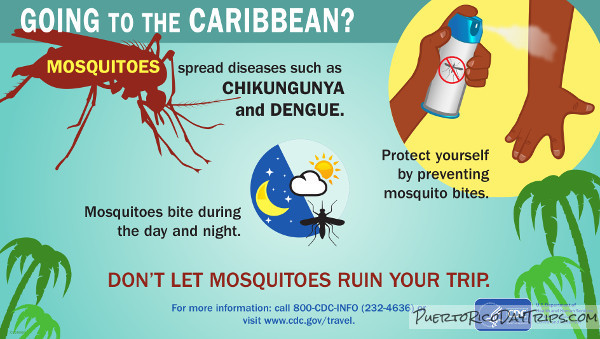 Use mosquito spray (Raid Flying Insect, or something similar) in your home and your hotel room. Even though we don’t live in a high dengue area, we still spray dark corners and under the furniture a couple times a day, just as a precaution.

How Widespread is Chikungunya in Puerto Rico?

As an individual, your chances of getting Chikungunya in Puerto Rico are very low.

You are not likely to catch Chikungunya at the beach, in the rain forest, on a bio bay tour or on a snorkeling tour — as these are just not places that are that hospitable to the Aedes aegypti mosquito. But remember, no matter where you go or what you do, you might want to take precautions to reduce your chances of getting Chikungunya. I feel it is better to be safe than sorry.

Mosquito photos by James Gathany, Scientific Photographer with US Centers for Disease Control and Prevention (CDC). From the CDC Public Health Image Library.