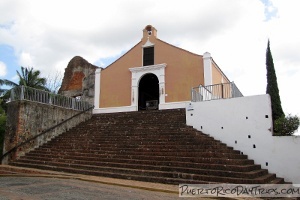 Located in the south-west part of Puerto Rico, San German is a bit off the beaten path, but it is a really neat town to visit. The historic district has loads of wonderful old buildings, and the primary church located on the town plaza is beautiful. If you’re visiting that part of the island, plan a little extra time to make a side-trip to San German.

Convento de Porta Coeli was originally built by Dominican monks built as a monastery in 1609. In 1692, the Friars added a little chapel. There were a few restorations throughout the ages. During the 18th century the convent and chapel were rebuilt, and the Porta Coeli church was constructed. 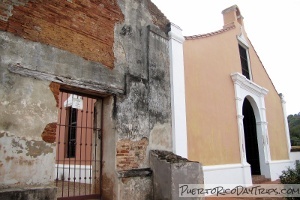 But time took its toll, the convent was abandoned, and eventually demolished. After a storm seriously damaged the church, it was sold in 1949 to the Puerto Rican government for safe-keeping.

Today, all that remains of the old convent is one ruined wall that is attached to the north side of the church. But the church is good as new, having been restored in 1960 by the Institute of Puerto Rican Culture (Insituto de Cultura Puertorriqueña). It is currently a museum of religious art, housing various paintings and wooden carvings from the 18th and 19th centuries. It was listed on the US National Register of Historic Places as Convento de Porta Coeli in 1976. 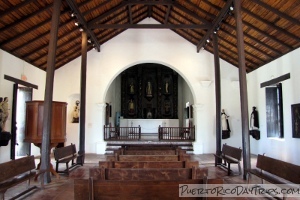 The museum itself is not all that big, but they have a number of interesting pieces on display. The pews in the back part of the church were removed to make room for exhibits, while the front part was kept as as it was back in the day.

The religious art and statues that are on display are really beautiful. The original 18th century, carved, Baroque-style tableau (or altarpiece) is still there. There are some really unusual paintings and carvings from through out the 16th century up to current time. There are works from Spanish and Mexican, as well as Puerto Rica,n artisans are on display. They have informational placards about each piece, but the information is all in Spanish. We found the person at the door was able to answer our questions, in English. Photos are allowed inside, without flash. 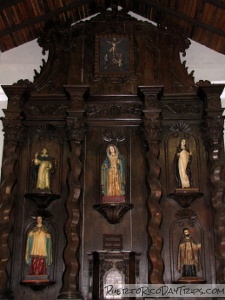 Once you are done exploring museum, make sure you spend some time exploring other things in this town. There is lots of great historical architecture. Stop at the tourism office in the town hall for a map, and possible guided tour of the town.

Allow about 1 hour to visit the museum.

There is metered street parking right next to the church. We also saw a public parking deck on the main street, just a few blocks from the town plaza.

Driving directions from Route 2 — Take Route 360 south into San German. The church is located on the corner of Calle Rama and Calle Santiago Veve.