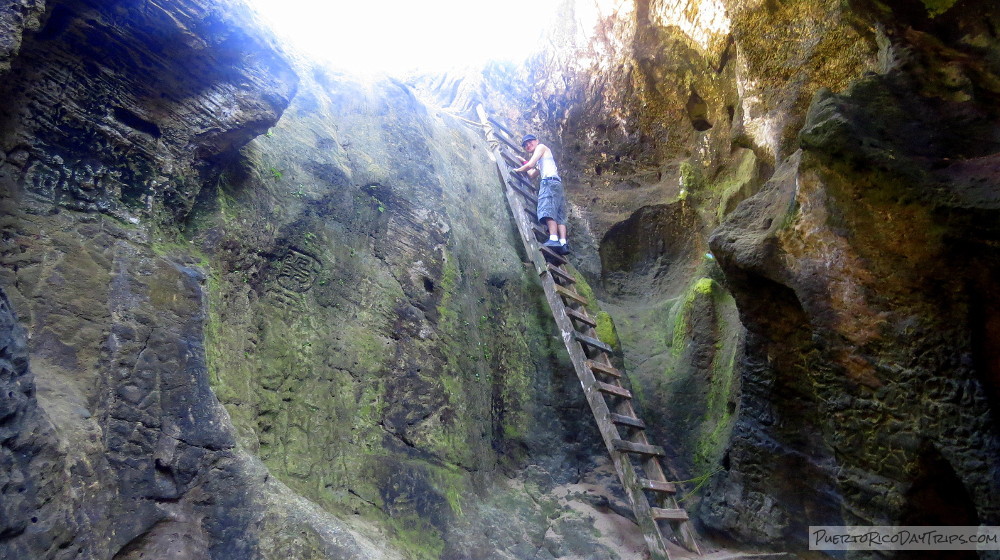 2020 Note- In Feb, 2017, the Department of Natural Resources has removed the ladder from the cave, for safety reasons. Without the ladder to get down into the cave, you can’t really see the petroglyphs….so you are mainly paying to park safely and see the hole and beautiful coast. Not that I would recommend doing it, but if you are able and daring, there is a crack/crevice in the wall in the corner of the flat area where the cave entrance was, that will get you down into the cave. 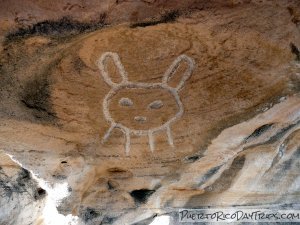 Puerto Rico is an island with many different faces. It is both urban and country, modern and historical, laid-back and hurried, built-up and natural. If you visit Arecibo and La Cueva del Indio (Cave of the Indian), you will see it all – modern, country, nature and history – all in one day. To get there, you take Highway 22, past the Barceloneta Outlet mall. From this modern highway, turn onto some country roads and see rural Puerto Rico along the northern coast. At the caves, you will be transported back in time. The Taino Indians held tribal meetings in this area and made numerous carvings in the walls of these natural limestone caves. The petroglyphs are said to have been made during ceremonial activities. These petroglyphs pre-date Columbus’ arrival to Puerto Rico in 1493, and were probably made many centuries earlier. 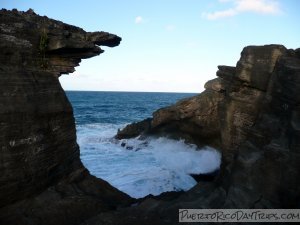 Getting to the cave and walking around the area to see the different eyes and arches is a bit treacherous. Along the entire area, you will be walking on rough, exposed limestone, which is sharp – take care not to fall! You should wear sturdy shoes – sneakers or something – not flip-flops or high heels. You will be looking over a ledge, down about 25 feet into the cave – be mindful of your footing. This cave is open to the sky, so you can see into it. Every once in a while, someone from PR Department of Natural Resources comes out to clean off the rocks and outline the carvings, so they are easier to see. When we went they were visible, just not as clear as possible. There used to be a ladder that let you go down into the cave, but that was removed early 2017. 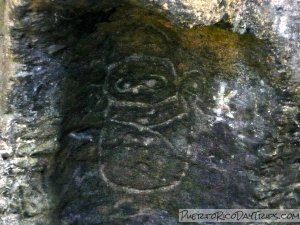 La Cueva del Indio is said to contain the largest number of petroglyphs found along the coastal zone. In 1992, the Planning Board of Puerto Rico designated Cueva del Indio as a Natural Reserve. Since then, the cave is managed by the Puerto Rico Department of Natural and Environmental Resources (DNER). They try to maintain it for conservation purposes. Unfortunately, there has been some vandalism of these beautiful historical carvings. Some idiots decided they needed to mark the walls But, thankfully, even after all these years, the petroglyphs had withstood the natural and human forces, and are still around today for us to enjoy. 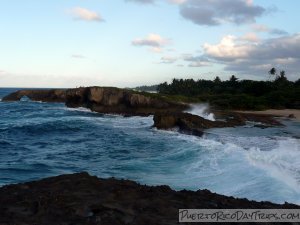 Even if you can’t get down into the cave, You can still walk all around on the rocks to see the views and watch the beautiful Atlantic waves crash on the beaches. There are just wonderful views in this area. There are huge cliffs, eyes, arches, caves and even a natural bridge. There were big waves that day, so it was just beautiful.

We have been told by locals about how the area is not really "safe" and that your car may be broken into if you park on the road. So just be sure to park in a lot. There are 2 parking lots available to get to the area, both at about Km 7.8. One on the ocean side, which is more of the tourist attraction one, and one across the road, which is just a local guy , with a large front yard. The one on the ocean side of the road is a little easier to get to the caves, but it is more expensive. The other ( parking in Richard’s front yard) across the street requires a short walk along the road, but it is cheaper. We have parked at both areas, and our car was safe, so you decide! Either way, pull into their lot, Park and then pay and they will tell you about the area and how to get there. Either way, it is a quick walk from the lots to the cave. You might also talk with the gas station owner, he is sometimes willing to will watch your car if you park there and use his bathrooms. If you choose to park on the road, make sure you do so in a way you are not impeding traffic in any way.

There is no "admission" price for the cave per se. It’s just a cave on the edge of the sea. BUT….For parking- If you want to park in the lot on the ocean side of the road, or even access that area by crossing this business property (as if you parked elsewhere), the owners charge you $10 per person. Their gate is open from 10a-5pm. For a more economical way-If you park on the other side of the road, in the front yard of the white house next to the gas station, the owner (Richard 1-401-771-0439) just asks for a donation to park the car (not per person and you decide the amount). And then he will show you how to get to the caves without crossing the other property. He is part owner of the now “free access” to the caves using Camino Smith (named for his father). He allows anyone to use this trail…it is just down the road a short way on the ocean side of the road. People may remember him and his father, who were the owners of the original Cueva del Indio business called El Coayuco! He hopes to start offering tours soon also.

Since it’s not a formal "park", there are no set hours that the cave is open, but I’d suggest going during daylight hours, otherwise you won’t be able to see anything! Cueva Del Indio ocean side parking lot only open 10am- 5pm. If you park elsewhere, you can access the area outside those hours.

Allow about 30 minutes to see the cave, petroglyphs but more time if you want to explore the beach and surrounding areas.

Take Route 22 and exit at Route 10 North (toward the ocean). Turn right onto RT 2, go over bridges. At the light, make a left and then a quick right to get onto Road 681 (you’ll see signs for 681). Follow Road 681 until KM 7.8 or so. On the ocean side of the street you will see a sign for Cueva del Indio . Pull into the dirt driveway and park. Or there is a white house on the other side of the street (right after the gas station) that has a large front yard for parking- pull in and call into to house to pay and directions to cave entrance. .

Travel time from the San Juan area is about 90 minutes one way.