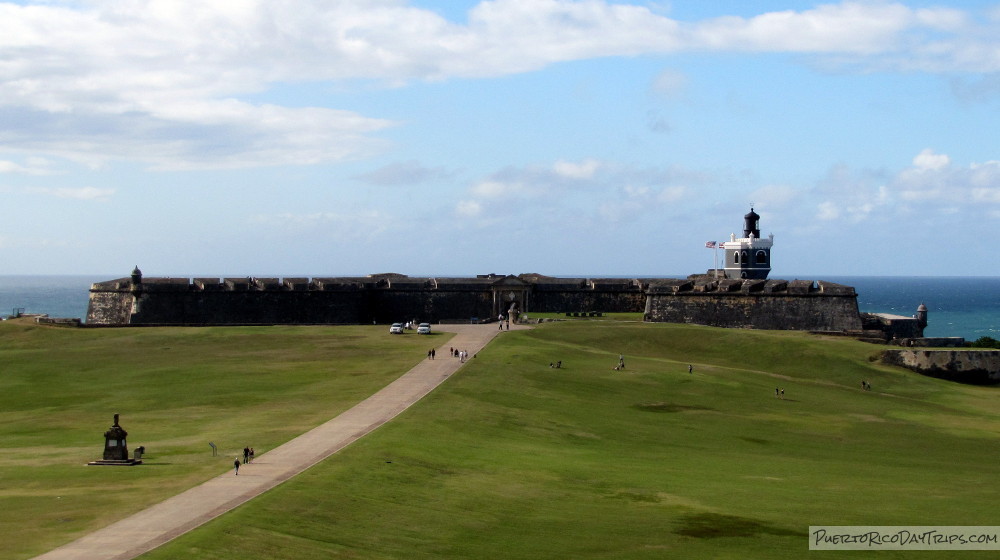 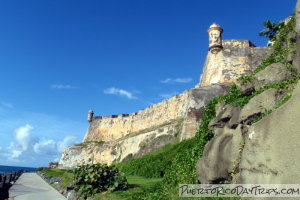 El Morro Fort, or officially Castillo de San Felipe del Morro, stands guard at the entrance to San Juan harbor as a reminder of a by-gone era when invading countries would attempt sea attacks to take this prized city and harbor.

This beautiful 6-level fort was named in honor of Spain’s King Philip II. The Fort wasn’t initially built as the huge structure that you see today. It has gone through many enlargements and modifications, from the time it was first constructed by Spain through the time that it was occupied by the US Army.

In 1493, Christopher Columbus (Cristobal Colon in Spanish) "discovered" Puerto Rico and claimed it for Spain. A little known fact is that Columbus called the whole island San Juan, in honor of Saint John the Baptist. Puerto Rico (puerto = "port" and rico = "rich") was the name given to what is known today as the Old San Juan area. It was only later that the names were reversed and the whole island became known as Puerto Rico. 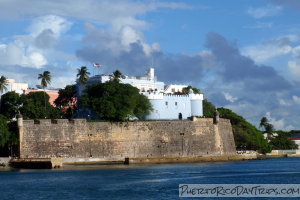 The San Juan harbor is naturally deep and safe, and Puerto Rico is in a strategic location, so it seemed that everyone wanted to call San Juan their own. After Spain claimed the island and started colonizing it, many pirates and privateers tried to invade to get the island and some of Spain’s riches! So Spain always had to fight to keep claim to the island.

After the original fort Fortaleza (now the Governor’s mansion) was deemed to be inadequate protection for the harbor, it was decided that a fort was needed in a better location. So they built a small structure at the north-west tip of Old San Juan, at the entrance to the harbor, on the current site of El Morro. Built between 1539-1540, it was a small fort that held a few men and only 4 cannons. 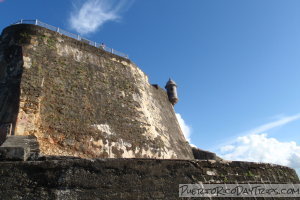 That initial small fort was sufficient for a while, but as Spain expanded their conquests, more and more pirates and privateers tried to take the island. In 1595 Sir Francis Drake, a buccaneer (or a privateer, which was technically a sanctioned pirate!) from England attacked, but the Spanish troops were able to fend him off. In 1598, The Earl of Cumberland (another Privateer from England) attacked and conquered the city, however he could not hold it long. It returned to Spain’s control, and to improve defenses, Spain added some fortification to the little El Morro structure. 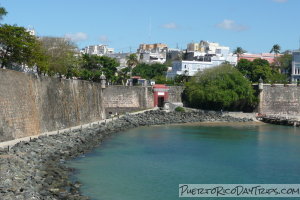 But a weak link was found when in 1625, when the Dutch invaded from the land side of El Morro, where there was no protection. The Dutch were finally driven off about 1½ months later. This attack spurred the building of the walls that encircled the city in 1634. The work continued into the mid 1700’s when the King of Spain decided to make San Juan virtually unconquerable. In 1765, they started the enlargement of El Morro and San Cristobal forts to the massive structures you see today. The whole thing – huge city walls, San Cristobal fort for land attacks, and the El Morro enlargement – took about 150 years to complete. El Morro now had six levels of defense and rose 145 feet above sea level.

These defenses were put to the test in 1797 when Britain tried to besiege the city again. The massive, strong structures withstood the attacks, and the Spanish army was able to defeat the British once again. San Juan then remained safe until modern time. 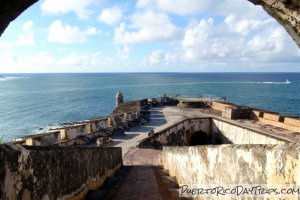 In its last test of strength, El Morro stood as a protector of San Juan during the Spanish-American war. In 1898, the US Navy began sea bombardment against El Morro. After only a few hours, it was evident that the old walls and weathered cannons were no match for the modern US weapon technology. The war ended with the signing of Treaty of Paris. Spain ceded ownership of the islands of Puerto Rico, Cuba, Guam and the Philippines to the United States.

Following the Spanish-American war, the damaged structure and the lighthouse of El Morro were rebuilt. During World War I, the US used El Morro as an outpost to detect and control hostile water activities. It became part of Fort Brooke for the US Army. The green lawn in front of El Morro was even turned into a golf course! For World War II , they added the ugly observation bunkers that can be seen today.

In 1949, El Morro and San Cristobal became the San Juan National Historic Site, administered by the US National Park Service. In 1983, it was declared a World Heritage Site by the United Nations.

Your Visit to El Morro 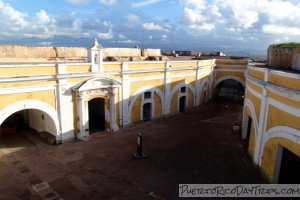 The National Park Service supplies you with a map when you pay your entrance fee. You can use that map, and the descriptions of the different parts of the fort, to do a self-guided tour of sorts. Go off and explore the fort on your own. El Morro is a massive structure, with 6 levels that you can visit by using various stairs, ramps and tunnels.

Some Points of Interest

Here are some of the more interesting things to see in El Morro. These are great "photo ops". 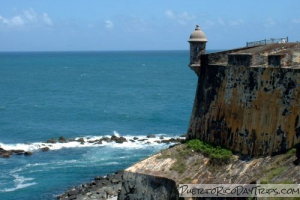 Garitas – The garitas, or sentry boxes, are located all around the outer walls of the fort. There are a number of them that you can go into. These garitas have become a cultural symbol of Puerto Rico – you will see their images on many things, from license plates to shot glasses to tee shirts. These make wonderful pictures.

Lighthouse – The lighthouse was rebuilt by the US in 1908 after it was damaged in the 1898 Spanish-American war. 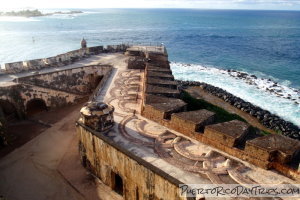 Cannon Water Battery – This area was used to protect the entrance to the San Juan harbor with cannon power. Some of the remaining cannons are on display near this area. It’s now a lovely observation area, providing great views of the harbor and the Atlantic Ocean.

Torre Antigua – The Torre Antigua, or Old Tower, is the oldest part of El Morro. If you go down the tunnel, you can see a shell fragment from the 1898 US bombardment that is still stuck in the wall.

Kitchen & Forge – In this area, you can see the kitchen where meals where prepared and the forge where they did some of their metalwork. The walls are still stained with soot from the hot fires they had in these areas.

Staircases – Be sure to check out the spiral and triangular staircases that go from level to level.

Restrooms – Besides the obvious, there are fantastic views from the window in each of the restrooms. So don’t be surprised if you see someone coming out of the restroom with a camera in-hand!

If you are at El Morro when a cruise ship is coming in or going out of the harbor, you’ll notice that they are very near the west side of the fort. It is an amazing sight to see to see the old (fort) and the new (ship) right next to each other, the old and the new, both massive.

The admission fee is $10.00/person for ages 16 and older, Kids under 15 and under are free. The ticket is good for visiting both El Morro and San Cristobal forts for 24 hours. Your National Park Service passes are valid here. No cash- only debit credit or Apple/Google Pay.Audio Tour is available for additional cost.

The fort is open to the public 7 days/week from 9:30am until 4:30pm. Closed New Years, Thanksgiving and Christmas days.

You will be walking around a large concrete and rock structure. It will be HOT. Wear sunscreen and drink lots of water (there are water fountains near the restrooms and they sell bottled water in the gift shop).

Allow a minimum of 1 hour, though you’ll probably spend more time if you start looking at the exhibits.

You can visit their web site or better yet, their Facebook page for more information.