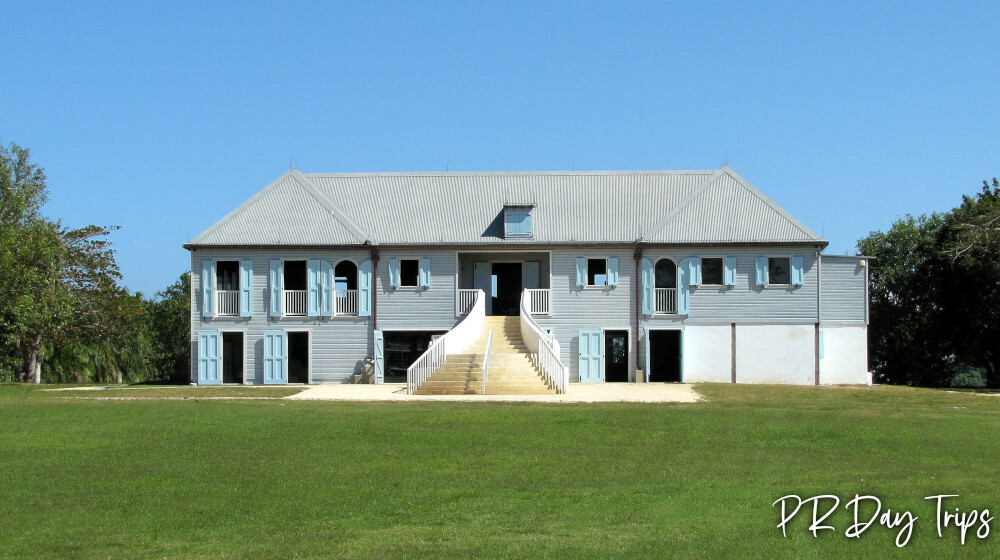 Posted by Gwenn • Updated on 18 Oct 2022
Category: History, Porta Atlantico (North), Tour
Print This Without Photos
+ Print This With Photos 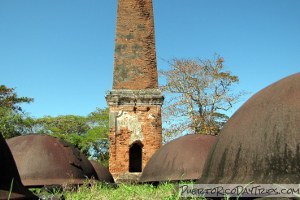 On our trips around the Caribbean Islands, Ray and I almost always make time to tour any restored sugar plantations that we find. The sugar era played a huge role in the history of so many islands to make them what they are today. The flip side of the wealth created by sugar is that it also was the driving force behind the slave trade in the Caribbean.

Almost every Caribbean island has the same sugar/slave history, so it always amazed us how Puerto Rico has allowed their sugar mills to deteriorate and tumble. As the remains of the sugar mills disappear, a huge part of our local history goes with them — lost, not preserved, not discussed … forgotten.

Recently, the Fideicomiso de Conservación de Puerto Rico (Puerto Rico Conservation Trust) has completed the first phase of the restoration of the old sugar plantation Hacienda La Esperanza in Manatí. They are now offering tours to help educate people on this forgotten part of Puerto Rico’s history “From Slavery to Hope”.

Of course, sugar production is a labor-intensive business and they needed many workers to perform the difficult, hot work. Slavery filled that need.

In the 1850s, his oldest son José Ramón Fernández y Martínez, inherited the estate and made improvements in production processes. In 1861, he installed a West Point Foundry Steam engine, which allowed him to increase sugar production 4-fold, increasing his need for laborers. At one point, he had over 170 slaves working at the Hacienda, which had over 2000 acres planted with sugar cane.

After the Emancipation in 1873 (and loss of the "free" labor), the sugar industry in Puerto Rico crumbled. The hacienda went bankrupt, and in 1879 the land was sold. The new owner introduced machines and industrialization of much of the labor, so the land was continued to be used as a sugar plantation for a while, but that eventually ended.

In 1975, the Fideicomiso de Conservación de Puerto Rico or “Para la Naturaleza” bought the abandoned estate and some surrounding properties. Currently, they hold 2265 acres in area. They researched the history of the estate (using the little documentation available) and began restoration & reconstruction of the estate house and some of the remains of the processing plants. In late 2010, they opened the estate for house/plantation history tours. Hacienda La Esperanza is now on the US Department of the Interior’s National Register of Historic Places. 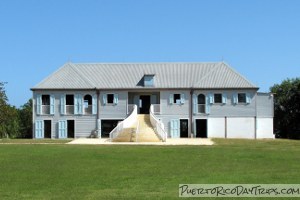 We were the only people on the English tour the day we went, so our guide Ricardo met and greeted us on the path up to the estate house. Though Ricardo’s primary love is the land & nature tours at the Hacienda, he did a great job with the history tour. He patiently answered our million questions!

The history tour is broken up into a few different parts. It starts on the ground-level floor of the estate house, where they tell you about the Conservation Trust and their mission of educating the public and conserving natural spaces and important historical places. They just finished up a project about land crabs, including an effort to educate the locals about the effects the trapping of crabs has on the overall ecosystem. They also tell you about the estate house — people lived and worked upstairs, while the ground-level was used as a stable, garage and for storage.

Next, they take you upstairs to the main floor of the house. The Conservation Trust restored the house, but they left the upstairs as one open room (even though the original floor plan showed the house divided into typical living areas). Ricardo said they wanted to preserve the history of the estate, but did not want to emphasize the opulent and wonderful lifestyle that this slave owner had. They focus instead on the history, from the estate’s beginning, the owners and workers, the sugar era, and up to the present day.

This is not a slavery tour. But slaves were the only reason the sugar era was able to thrive, so that aspect plays a part in this tour (and in the island’s history). I was so sad to learn that all the original papers about the slaves from the estate records had been destroyed. But they have been able to find some information from other sources, such as town records. A beautiful, handmade mundillo (bobbin lace) cloth has been made that contains the opening statements of official complaints from some of the estates’ runaway slaves. Ricardo told us some of the details of the complaints — the horrible treatment, the abuse and the lack of any possible help from authorities. It’s thought-provoking stuff. 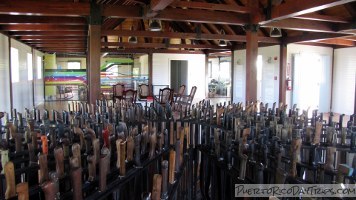 Currently, they also have a collection of machetes. Ricardo discussed the tool of choice for the islands and how the shape differs for different jobs. There are examples of "slave" machetes, which were not sharp, were shorter and without a point. This rendered it virtually useless as a weapon, but also making it a terrible tool.

Ricardo explained how the bottom of the sugar cane has the highest concentration of sugar. To cut it low enough with a short tool, the slaves that cut the cane had to bend all day. Many of the slaves were permanently disfigured from bending in the fields day after day for most of their lives.

After finishing in the house, you head outside, across the large field, past the kitchen ruins, to the remains of the sugar mill. Along the way, Ricardo pointed out the differences of the original square " chimney" of La Esperanza (from the pre-industrialized era) to the 2 round chimneys of a separate, more modern sugar mill that can be seen in the distance. 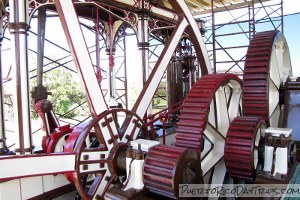 At the old mill, we climbed up the platform to the colossal 1861 steam engine (which turns the cane press). It has has been restored to its original glory. They have retrofitted it to run on an electric motor and they turn it on for a short time, so you can see how it worked. It really is beautiful and a marvel of engineering, that enabled increased production. In 1979, it was named a National Historic Mechanical Engineering Landmark.

Next, we saw the remains of the sugar mill and Ricardo explained how the sugar cane was processed to sugar. I can’t imagine how hot it must have been working inside this brick building, stoking the fire and stirring the boiling sugar cane juice.

We stopped by an area that was planted with a couple different types of sugar cane. Ricardo explained that multiple types of cane were grown on the estate so that they would be ripe at different times of the year, which allowed them to produce sugar almost year-round.

Lastly, we stop in the drying house, where the end result of the mill was put into barrels and the sugary liquid was allowed to dry an become sugar crystals. In this room, the also have an original blood mill, which was turned by animals or slaves, and required people to manually place the cane into the rollers to press out the juice. Unfortunately, all too often, hands or arms would accidentally (or sometimes on purpose, for punishment) be crushed between the wooden rollers (hence the name).

The tour is educational and thought-provoking. Hacienda La Esperanza is a real local treasure. A complete history of Puerto Rico’s past is important to preserve, and this tour gives you the chance to learn about the sugar era — both the good and the bad parts. The total of those parts has had a huge impact on modern day Puerto Rico, culturally, demographically, culinary, and musically. Education about the past is our only hope of learning from our mistakes.

Tours are by reservation only. Tours are offered mostly weekends, but check for exact dates and times on their page. Usually only the 2pm tour is in English. Cost depends on age…pay when you book reservation online

Wear comfortable walking shoes and bring a bottle of water.

You can visit the schedule on their web site for more information or to make a reservation for the tours.

Hacienda La Esperanza is about a 1-hour drive from San Juan.