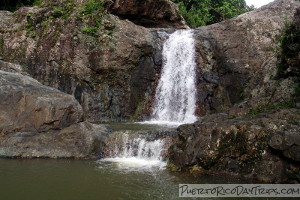 Like most people, Ray and I enjoy waterfalls. There are plenty of them to be found in Puerto Rico, but they are usually in obscure, out-of-the-way places and finding them usually becomes an adventure in itself. We had heard about Las Garzas Falls in Adjuntas, though we had no definitive information about it’s location. During a recent trip through the south-central part of the island, we were passing through Adjuntas, so we decided to ask around and try to find Las Garzas Falls.

Sometimes called La Ataud or Salto Ataud, this one was a challenge to find! As with most of the waterfalls around the island, there are no signs or other indications that the waterfall even exists. When we did find the trail down to the waterfall, we were glad we made the effort. Las Garzas Falls is pretty and multi-tiered. The trail emerges from the forest at the top of the falls. But we were able to scramble down the rock wall to a mid-section — that’s where we had our picnic lunch. We could also see trails over on the other side of the falls, which lead down to a place where the kids jump into the deep water of the lower falls. 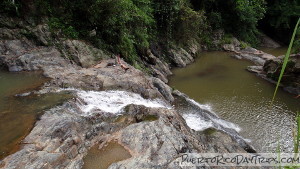 The top falls was about 20 feet tall (pictured above), then there was a pool, then it went down to a taller falls (about 40 feet tall). Without jumping in, we couldn’t figure out how to get down to the base to get a picture. There were swimming holes at the base of each of the falls. The pools at this waterfall appeared to be deep, but the water wasn’t clear or blue like we are used to seeing in other parts of Puerto Rico — the water was more of a brownish color (not sure when last rainfall was). Many of the rocks were covered with algae and were slippery.

We decided not to go swimming at these falls, though I know people do. I assume it is clean, it just looked more "natural" than what I like!

Safety Note: these are slippery rocks, so you need to be careful when walking around on them. If you loose your footing, you can be seriously hurt. Also, never go in the rivers during a rain (flash floods happen a lot ) or even a day or two after a rain, since the current can be too strong to be safe. People have been hurt/killed while playing in the rivers, jumping from the rocks and climbing around the rivers. Respect nature and be safe. And don’t litter.

Getting to Las Garzas Falls

We didn’t have real directions for this one, so we asked the folks at Casa Pueblo. The info they gave us got us into the general area, where we ended up asking around for more specific directions. With that information, and a little exploration on our part, we were able to find the falls. We will give you the information we have, and will be as specific as possible, but this town was a little difficult to manuver , so you might want to stop along the way and ask for more specific directions.

If you’re heading out of Adjuntas, take Route 10 North, make a right onto Route 123 North and follow that until you can make a left onto Route 123 South (having a map of the area will be helpful!). Go South on Route 123 for a bit, then turn right onto Route 522 (follow the signs for Parador Sotomeyer). When you get to Parador Sotomeyer, go to the left, at which point the road gets smaller. As you continue up this road, it will continue to get smaller and "V" a couple times. Stay on the "main" road. At one of the V’s, you’ll notice a newish-looking bridge to your left. Use that bridge to cross the river and then continue up the road to the right. Continue on this road for about 5 minutes. Eventually, you will come to a place where there is a lot of "parking" (meaning places where people pulled off of the road) along the edges of the road. You’ll see the (unmarked) trail on the left of the road. Follow that trail down to the falls. Be careful, the trail can be muddy and slippery.

After you’re done at the falls, you can turn your car around and drive out the way you drove in (recommended), or for a more scenic drive through center of the island, follow the road to the end, where it meets Route 518, which is part of the Ruta Panoramica. Note that these roads are very twisting/turning mountain roads. The driving is slow (maximum of about 20MPH) but the views are beautiful. If you take this route, leave lots of time so that you can get off of these small roads before nightfall.