Posted by Gwenn • Updated on 03 Mar 2021
Category: History, Porta Antillas (East), Tour
Print This Without Photos
+ Print This With Photos 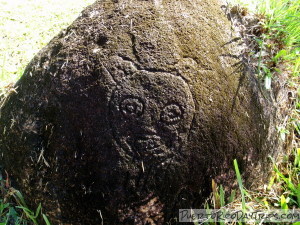 Personally, I am really interested in seeing the remnants of native civilizations many hundreds of years old. Luckily for me, Puerto Rico is full of these treasures.

Prior to the arrival of the Spanish, Puerto Rico was inhabited by native Indians called Taínos. The Taínos left evidence of their presence in the the form of petroglyphs, which were carved on rocks in streams, ball courts and caves. There are many examples to Taíno petroglyphs throughout the island, including at La Cueva del Indio (the Cave of the Indian) in Las Piedras, in the eastern-central part of Puerto Rico.

The Taíno Indians called Borinquen (their name for Puerto Rico) home for about 700 to 1000 years. Unfortunately, in the early 1500s, the Spaniards arrived in Puerto Rico and most of the Taíno males were enslaved and the women became “wives” for the soldiers. Many were killed off by disease. There are few if any pure-blood Taíno left on the island, so little remains of the culture.

But the Taínos’ cultural contributions can be seen today in artwork, food and language. Many of the symbols from the petroglyphs have been used in all kinds of art and decorative works. Staples of the Puerto Rican diet include cassava (yuca), batata (sweet potato) and calabaza (pumpkin). The Taíno language contributed some words that have been adopted into both the English and Spanish languages: barbacoa (barbecue), hamaca (hammock), canoa (canoe), tabaco (tobacco), and Huracan (hurricane).

La Cueva del Indio in Las Piedras was discovered during some developer’s excavations in 1982. Once they realized what they found, the place was protected. It has been on National Registrar of Historic monuments since 2003.

To keep this national treasure safe, it is open only by appointment, and Las Piedras has an oficina de cultura (tourism & cultural office) located right in the City Hall through which they offer free guided tours to the caves. So we gave them a call and set up a date to visit the cave.

The morning of our tour, we met Irma Ramos and her co-worker Danny at their office, where they gave us literature about Las Piedras and the Taíno people. After telling us a little about what we were going to see, we followed them on the short drive to the cave. 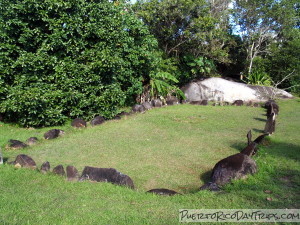 The first thing you notice is just how fertile it is in this area. Irma also told us about the different trees and plants around us, and how the Taínos used this site for many years. They worked the land, and used the streams for fishing and water. It is a beautiful, verdant place, with views of El Yunque and lush tropical plants everywhere you look. There were all sorts of fruit and vegetable still growing here like guineos (bananas), platanos (plantains) and root vegetables like name (yams). Danny even picked us some ripe rose apples from a nearby tree.

The next thing you come to is a batey or "ceremonial area". It looks like a rectangular area that was bordered with standing stones. You can see some of the rocks have petroglyphs on them – faces, the sun, geometric shapes, animals. Irma explained that the batey is where ceremonies, like weddings, or some games played with a ball would take place. 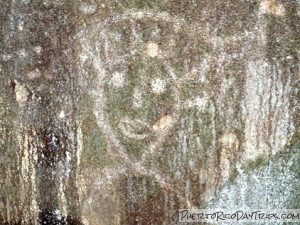 Though it is a pretty little park, the real reason you visit is to see the petroglyphs in the cave. Right at the entrance to the cave is a cojóbana tree. Irma explained how the Taínos used to ingest or smoke cohoba (made from the cojóbana tree), which has hallucinogenic properties, as part of their religious ceremonies. Then they would go into the caves and speak, or somehow be in contact with, the Gods. They would then make the drawings of what they would see and/or hear during these religious/spiritual encounters.

The La Cueva is not a cave per se. It’s more like a bunch of huge rocks leaning against one another that have spaces between them forming tunnels and passages. So it is not pitch dark in there, you can easily see where you are going. You walk down into the "cave" and the drawings are all in this one area. It was a bit difficult to see the etchings because the contrast is not that great. We brought a flashlight, but it did not help, since it reduced the shadows. But there were a lot of them! According to Irma, there are over 200 petroglyphs in the one area. We could see shapes that looked the sun, and a few heads and/or "being" shapes. You could tell there were many, but it was hard to discern what they were drawings of. But it was still pretty neat. As you go further into the cave, you get to different areas (like an area where women supposedly went to give birth), but I did not see any more petroglyphs.

As we emerged from the cave, we walked a little to an area that had what Irma called a "Spanish bridge". This is actually a small tunnel that, supposedly, the Spaniards would make the Indian slaves crawl through during gold mining. The idea was that, since the tunnel was too short to stand in, the slaves couldn’t steal and escape with too much gold since they had to crawl. You can go through it if you want, it did not look appealing to me. But Irma said kids love to go through it!

When you first walk in to the park, you’ll see a play area and picnic tables. It turns out school groups and Scouts come to use this park for educational purposes. Since the cave area so small, only a few people can go in at a time. The play area is to keep the others occupied until it is their turn to go in!

Other things in Las Piedras

Very close to the Cave is Monte del Retiro. It offers an educational tour of another Taíno settlement area and great views. Call for appointment 787-205-3955. Open Saturday 8am – 5pm, Sunday 1pm – 5pm and holidays 8am – 3pm.

There is also a cute "Historical Museum" in town. It’s less of a museum and more of just a collection of everything! From Taíno artifacts to WWI helmets, record players, photographs, old washing machine, tools, telephones, cameras … you name it, they had it! More of an antique shop, but nothing is for sale. The guy who runs it didn’t speak much English, but he was very happy and proud to show the collection to us. When they finish making repairs to the old City Hall (Casa de Alcailde), it will move into there.

The tour to La Cueva del Indio is freely offered by the government of Las Piedras.But they will gladly accept donations!

The rocks can be slippery and uneven, so wear sneakers or other shoes with good traction. You will have to do a little climbing in/out of the cave. Tours are offered in English or Spanish.

Allow about 1 hour, start to finish.

Call the Las Piedras Departamento de Cultura or Tourism Department at 787-733-2160, extension 506. for more information or to make an appointment. They will set up a meeting place.