Outdoor Art in Old San Juan: It’s All Around You 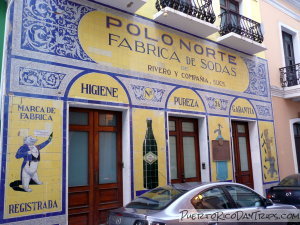 Old San Juan is a 400 year old city, that has come into the modern age. The original great old buildings blend well with the modern conveniences. Luckily, there are many ordinances for refurbishment, so little of the historic integrity is lost during building renovations. Many of the hotels, restaurants and bars are in refurbished 200-300 year old buildings, most of which maintain their original charm. You can really see how it looked way back then. A quick stop into El Convento Hotel will show you exactly what I mean!

But the city has also grown culturally, with modern art mixed in with the old ambiance. Of course you can go into the many museums and galleries that offer all types of art. But you can also see art (old and new) all over as you walk around outside in Old San Juan. There are sculptures galore, in all sizes and styles, depicting all sorts of people and things. There is also Spanish tile work and modern tile work all around. The ornate iron work on the buildings is sometimes so detailed that it can be considered art itself. Some of the architectural details are so lavish that the whole building is a work of art! If you really care to look, there is art all around you in this old city. Just enjoying all the pretty colorful buildings (some with the little balconies) along the blue cobblestone streets are beautiful!

Some of my favorite sculptures 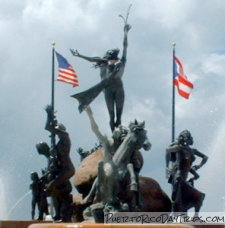 Raices Fountain – This beautiful bronze fountain, designed by Spanish artist Luís Sanguino, is located at the end of the Paseo de la Princesa. Raices (which means roots) was sculpted in 1992. It depicts the origins of Puerto Ricans – a people with descendants from the Taino Indian, African and Spanish, all blended and rising out of the sea with dolphin escorts. 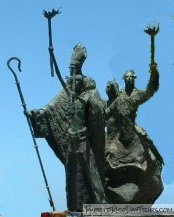 La Rogativa – La Rogativa stands at the end of Caleta de las Monjas, right on the edge of the city wall, just inside the San Juan Gate entrance. It is a modern style bronze sculpture made by Lindsay Daen in 1971. It depicts the 1797 procession of the Bishop and religious women which is said to have scared off an invading British fleet. Allegedly, the British assumed the procession was actually military reinforcements. 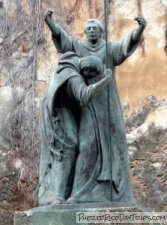 Fuente de la Herencia de las Americas – This group of bronze sculptures were created by José Buscaglia in 1992. The grouping is currently located along the south side of the Paseo de la Princesa, in the Jardin de la Princesa park. This is a set of 5 individual sculptures that go together. This work is said to symbolize the various periods Puerto Rico has been through in the last 5 centuries – from the coming of the Spanish Conquistadores to the start of the US presence. 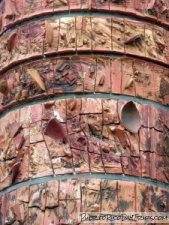 Totem pole – This sculpture is in the Plaza del Quinto Centenario (Quincentennial Square). Designed by Jaime Suarez in 1992, the totemic monument was the main part of the 500th anniversary commemoration of Columbus’ discovery of the New World. It is about 40 feet tall and is made of black granite and (supposedly) actual Taino ceramic pieces.

Fountain at The Plaza de Armas – This plaza is located on San Francisco Street, between San Jose and Cruz Streets. This lovely fountain is over 100 years old and has statues representing the four seasons. Shown here is “Winter”.

Jorge Zeno Animal Sculptures – There are 3 whimsical works by Jorge Zeno located in the little square across the street from the Cathedral. They are penguins in a boat, a cat/giraffe, and a rooster. Here is “cat/giraffe”. There is another copy of this sculpture in front of the Banco Popular building. 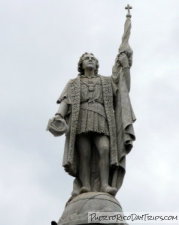 Christopher Columbus – A statue of Cristobal Colon (Christopher Columbus) is located in Plaza Colon, right by the Fort San Cristobal. Erected in 1893 to commemorate the 400th anniversary of the his arrival in Puerto Rico (1493), the beautifully sculpted base depicts Columbus’ life. 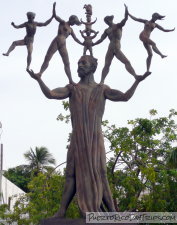 Eugenio María de Hostos – This statue of Eugenio María de Hostos (The Citizen of the Americas), by José Buscaglia, commerates this famous Puerto Rican educator, philosopher, intellectual, lawyer, sociologist and independence advocate. Located in the plaza near Casa Blanca ( which I call skateboard park due to the teenagers that hang out there skateboarding).

Ponce de Leon – Located in the Plaza de San José, this bronze statue was made from British cannons captured during the attack in 1797. Commemorates the first governor of Puerto Rico, Juan Ponce de Leon. 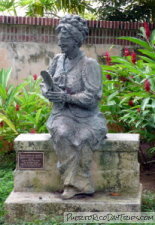 Felisa Rincón de Gautier – If you go into the gardens along the Paseo la Princesa, you will see this sculpture of a sitting lady on a park bench. She was the first female mayor of San Juan. She was much beloved by the people, holding the office of mayor for 22 years, from 1946 to 1968. 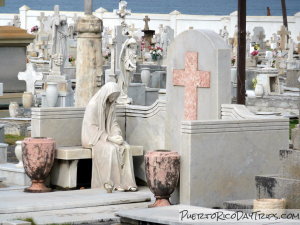 Old San Juan Cemetery – During the day, you can make a stop in at the Old San Juan Cemetery (Cementerio Maria Magdalena de Pazzis), which is located down a small street to the east of El Morro. It’s (supposedly) open 8am – 3pm weekdays and 7am – noon on the weekends. Some of the memorials on family plots are absolutely beautiful sculptures. Even if the gates are locked, you can look in. I would avoid this place after dark, as it is situated very close to a questionable neighborhood. 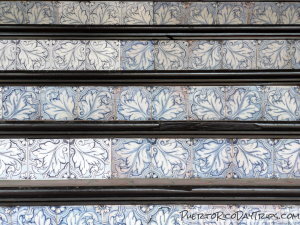 Spanish Tile Work – Some other "artwork" that you should keep an eye open for in your walks are the Spanish tiles and mosaics. They are not always easy to spot, but here is a hint – take a peak inside open doors on homes or businesses and look at the steps leading to the upper floor, many will have beautiful old tile work. Also keep an eye out for it on the outside of the buildings, sometimes above windows. Some of the tiles are just beautiful. There is even one old building that is a 120 yr old tile billboard for itself (an old soda factory!). See the first picture in this article.

Ironwork – Locally called rejas, you can’t avoid seeing the ironwork on windows and doors throughout the city. It was (still is) used as decoration that also acts as protection, from both burglars and wind storms. Some of it is very ornate. 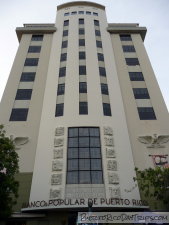 Architecture – The architecture of some of the old buildings and intricate painting is art in itself. Some notable examples are the art deco of the Banco Popular building and the Customs House by the Casita. 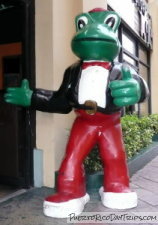 Senor Frog – And of course- if "artsy" art is not your thing, you might want a picture of Senor Frog! See? Something for everyone!

This is just a tiny introduction to the artwork and sculptures you will see around town. So take some time and walk all around the streets and small alleys in Old San Juan. All sorts of artwork awaits you!