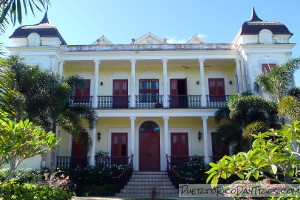 This one was a surprise find for us — a French coffee hacienda in Puerto Rico! The Old Labadie House or the Palacete los Moreau is located in the town of Moca, in the north-west part of Puerto Rico. This lovely, old house has been turned into a museum, and they offer great, informative tours about the house and the people who lived there. What a wonderful piece of Puerto Rican history and a local treasure. I thought it was really worth a visit.

In the early-mid 1800s, when Spain wanted to increase development in Puerto Rico, the Spanish government offered incentives to foreigners to come to the island and start businesses. The original owners of this property, 3 brothers of the Peugeot (Pellot) family, came from France and purchased 1285 acres of land in Moca.

They started growing coffee, sugar cane, cutting lumber on the property, and raising cattle and various crops and animals for household use. It was a large and prosperous endeavor for a number of years. Of course, as was typical at that time, they had many slaves to help work the land. 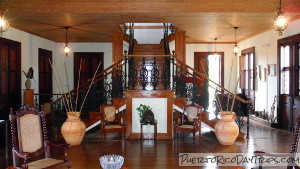 The large, 2-story mansion, built over a period of 12 years, looks like a French chateau. Cornelia used the first floor for business. The upper floor was used as the family’s living quarters. After the markets fell in the early-mid 20th century, the house was abandoned and eventually vandalized. In 1993, the town of Moca purchased the house and 100 acres of land, and have restored it to its former glory.

Back in it’s hayday, a local author, Enrique Laguerre, was a frequent guest at the mansion. The house and family inspired him to write a fictional novel called La Llamarada, in which he named the family who lived in the house Los Moreau. When the town of Moca acquired the property, they renamed it after the characters in Laguerre’s novel as an honor. Enrique Laguerre is interred on the property as per his final wishes.

The Tour of the House

What can I say? I really enjoyed it. I think this was one of the best tours we have been on here in Puerto Rico. Our tour guide was so earnest and excited about the house, its history and all the things the town is doing for the people — his enthusiasm was infectious! I fell in love with this house and the story!

Even though our guide did not speak perfect English, he did a great job of telling the story of the people and the property. He answered all of our questions, he had ghost stories, and explanations for things that could easily be overlooked — like the stained glass windows and the back stairs. I hope you al get a great guide…it really made the place come alive. 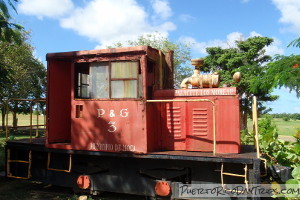 They allow you to walk through the house and the grounds and take all the pictures you want. There is even an original sugar cane train engine that transported the sugar cane from the fields to the ships or processing places.

Our guide told us about a film that was made at the house, in 1968 called Mulato. I was able to locate the film and view it at the Nacional Archivos here in PR. Since it was filmed before the vandalism, the town of Moca was able to use it as a reference when restoring the house.

Moca has done great things with this place. There is a library & computer room downstairs that local children can make use of after school for studying and using the internet. They offer the free tours to everyone. You can come and take your wedding photos on the grounds for a small fee. Every year they have a few fairs and family days on the property, so people can enjoy the place. And some of the land is even being farmed. The house is listed on the National Register of Historic Places as Hacienda Iruena Manor House. 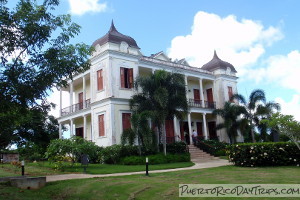 Touring the house and property is free of charge. They don’t even accept donations or tips, since the property is managed by the town of Moca and the guides are municipal employees.