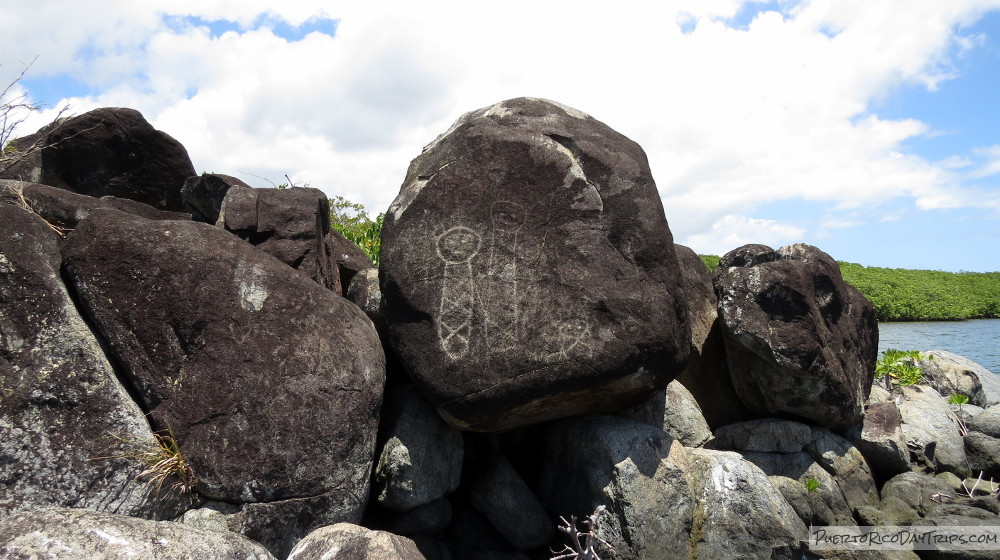 11/19 You will need to find a place that rents kayaks and put them in yourselves, or Contact the Centro Turistico del Este to reserve a hiking trip

We have been wanting to see the Wuanikí Bawá or Piedra del Indio petroglyphs for many years. They are drawings of three figures, etched a monolith at the water’s edge, that are accessible only from the water. Now that the old Roosevelt Roads US Navel base is open to the public, we were able to rent kayaks and go. We rented kayaks from Blackbeard Sports (who Pre-Maria had a place near there) and spent a couple hours exploring the petroglyphs and nearby mangrove lagoon.

Roosevelt Roads was once a very active US Naval base, that was closed in 2004. The navy base occupied roughly 8700 acres of prime coastal land in Ceiba on the eastern end of Puerto Rico. The Roosevelt Roads area has everything any nature lover could want — bird watching, beaches, reefs for snorkeling, and potential areas for water sports. In addition to the “fun & games”, there are significant pre-Columbian archaeological sites.

As an ex-navy base, the majority of the area had been off limits for years. Recently (2015), much of the old base area has been opened for public enjoyment. There are a few businesses available to help you make the most of the area. We recently rented kayaks and spent a couple hours exploring.

The Wuanikí Bawá or Piedra del Indio petroglyphs are drawings of three figures, etched on a monolith at the water’s edge, in a bay in the old Roosevelt Roads Naval base. Since the area was off limits, we never found a way get there.

In 2015, the Departamento de Recursos Naturales y Ambientales (DRNA, or Puerto Rico’s Department of Natural Resources) was given “ownership” of about 70 acres of land around, and including, the Wuanikí Bawá archaeological site. They have opened a center for the preservation of the area, and occasionally give walks. But unless you are are on one of their guided hikes, no one is permitted on the land around the rock so that it remains protected. Unless you go on a guided 4 mile hike, the only way to see this historic site is by a short boat ride or an invigorating kayak trip. 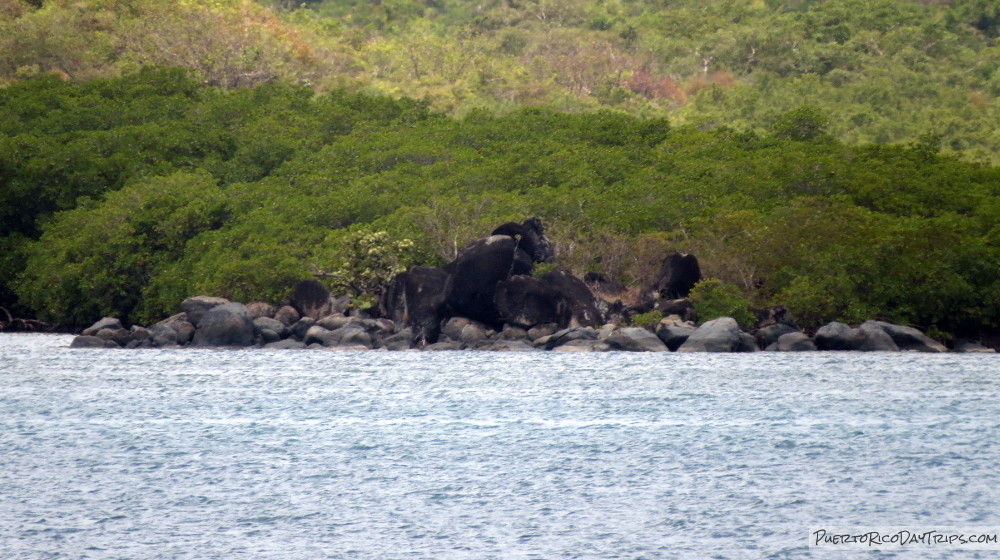 Blackbeard Sports was one of the businesses operating in the Roosevelt Roads facility, but post Maria, they have closed. We put the kayaks in and went.

The stone stands right at water’s edge, with the carvings facing the sea. The exact reason why the native peoples made this site, and what the carvings mean, is unknown. All I know is that they are really neat! 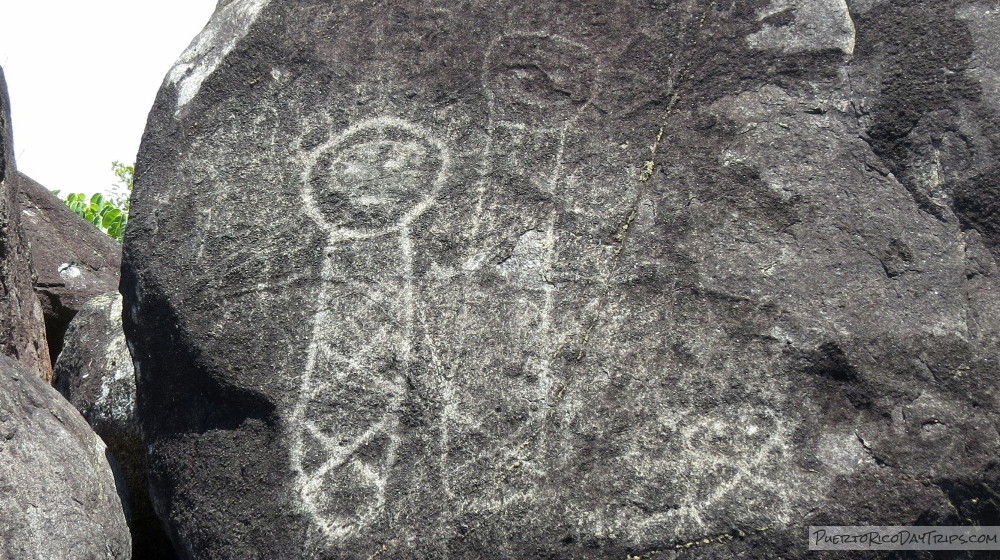 The main carvings are two “bundled babies”, which look like figures swaddled in blankets with a couple X’s on their chests. There is also a smaller carving of a third figure toward the bottom of the stone … which could be another person or a pet of some type.

After we took pictures of the petroglyphs, we continued kayaking into a nice mangrove area. I was amazed at how quiet it was there … just us and nature. There were birds coming and going, and fish jumping out of the water. Very nice. After floating around for a while, we paddled back across the bay to where we started.

If you are pretty good at kayaking, it will take maybe 1 hour to visit the petroglyph rock, and then get back to your starting point. Add maybe another 20-30 minutes if you want to explore the mangrove lagoon. On the trip back, you’ll be paddling against the wind, so that trip is more difficult. There is less wind if you hug the coast on the way back.If you do go to the petroglyph area, please take care to just look from the water so as to preserve this historic treasure. Don’t walk or climb on the rocks, or the area surrounding the rocks.

If you are not kayakers, you can see the rocks if you drive or walk to the end of the long pier. You’ll need binoculars or a strong zoom on your camera. But you won’t be able to see the drawings from the pier — the drawings face eastward, looking toward Vieques and the open sea.

As mentioned above, we rented our kayak from Blackbeard Sports who are no longer doing business in RR. Now we hear you can contact El Centro Ecoturístico del Este, who works with The Sierra Club and they make the occasional hiking trip. They call the tour “Mirada a la historia de la antigua base Roosevelt Roads y APRODEC”.

By kayak, allow 2 hours minimum, start to finish. On the guided hikes- It is a 2 mile hike each way…allow 4 hrs

You can visit the Sierra Club list of tours to check to see when next tour will be and for more information.

in the former Roosevelt Roads Naval base in Ceiba.

To get to Roosevelt Roads, follow signs to the Ceiba Airport. Once through the first gate, follow the signs. Go left at the V (away from the airport), then stop at the next guard gate and tell them where you are going.

The drive time from San Juan is about 1½ hours.

Other Operators in Roosevelt Roads