Posted on 15 Feb 2009 by Gwenn • Updated on 17 Jan 2021
Category: Beach, Hiking, Nature, Porta Antillas (East)
Print This Without Photos
+ Print This With Photos

This beach is subject to rough surf and rip-currents. The DRNA does not permit swimming at this beach. You can get seriously hurt doing so. We do not recommend swimming in this area. 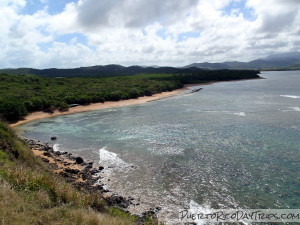 Are you searching for a nice, private beach during your visit to Puerto Rico? Then Playa Escondida is the beach that you’re looking for.

The beach’s name means "hidden" in Spanish. In order for it to be hidden, and virtually unused, it is in an out-of-the way place — you have to walk about 25 minues through a mangrove forest to get there. But the prize at the end is worth it — finding a pretty, secluded strip of beach like this one is always a pleasure.

This beach is located on the western side of the Seven Seas Beach cove. The DNRA (Department of Natural Resources) controls the area, and their signs say no swimming and warn of rough surf breaks. 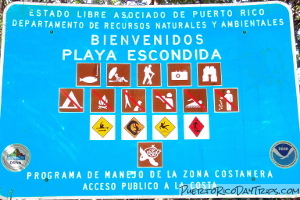 On many occasions, I found the water along this strip of beach to appear more calm than Playa Colora since Escondida has a large reef that breaks the waves further out. But looks can be deceiving, there are serious currents flowing, even when there aren’t large waves. This beach is only for enjoyment the scenery, but not go swimming. It is said this is one of the most dangerous beach in Puerto Rico, more people drown here than most other beaches on the island. Don’t become a statistic.

Getting to the Beach

Like I said, it is a bit of a walk to get there. From Seven Seas Beach, facing the water, Walk to the left. At the rocks, there is a path. There are lots of mosquitoes — bring bug spray and use it liberally before starting on this path! 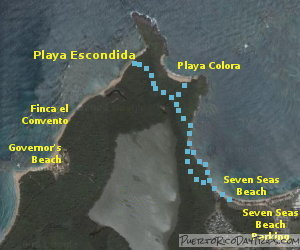 Here there are two choices — if it is low tide, you can continue to walk along the shore line, scrambling over some rocks or you can take the path to the left through the mangroves. I found the path to be much faster and easier. We took the path, until it comes to a T, then turn right (if you turn left you’ll end up at the Seven Seas campground). It eventually ends up on a small sandy area where the beach ends. Here there are some trails. The trail to the beaches is the one on the right; the other one goes about 20 feet then dead-ends at the mangrove swamp! Walk on this path for about 10 minutes through the mangrove "forest". Eventually there is a sign for Playa Colora. Don’t turn here (unless you want to go there too). Straight ahead on the path for about another 5 minutes is Playa Escondida. 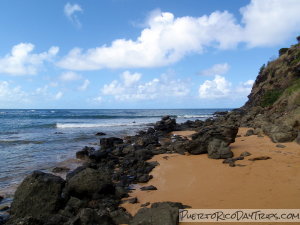 This beach area is a LONG strip of sand. It is golden in color and heavy. The water is clear. You can walk either to the left or to the right to find just the right spot for yourself. To the right, there is a the large “hill” of rock. Ray said there were trails that you could take that got you up the rock hill and he got some great pictures from there. You can see Luquillo and El Yunque very well. To the left, there are the other named beaches — Finca el Convento and then Govenor’s beach (no swimming allowed there either), where you will see the vacation house of the Puerto Rican politicians. You can use the beach there, just don’t go up near the house.

I have heard that this beach area (due to its remote location) has been used as a clothing optional beach. So be aware of that. You should note that nude sunbathing is not allowed on public beaches in Puerto Rico. We were there for about 4 hours and we saw only 2 other (completely clothed) families.

We did snorkel here, along the edges and it was decent. But we knew the currents and had flotation devices etc. We do not recommend anyone snorkel here.

Realize, you need to bring everything — there are no facilities there. Bring a beach umbrella, since there is not much shade. Also, bring plenty of fluids. And please be prepared to "pack-out" your trash so the next people can also enjoy the unspoiled beauty. Obey all posted warning signs.

The Seven Seas balneario is open Wed-Sun, 8:30am – 5:00pm October through April, and Tues- Sun, 8:30am – 6:00pm May through September. Even if Seven Seas beach is “officially” closed, you can still enter and use the beach, just not through the main entrance.