Printed on 20 Jan 2020 from
PuertoRicoDayTrips.com 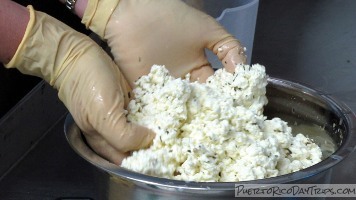 I knew that Puerto Rico has a thriving dairy industry, but I had never really given it much thought. But cheese is made from milk, and I love cheese … so when I learned about a cheese-making tour offered by Quesos Vaca Negra … it piqued my interest.

This was not a walk through a factory and watch cheese being made through a window tour, but a hands-on cheese-making and tasting tour. Though you have to get up pretty early in the morning (the cows are milked early and they use today’s milk), it is so worth it! We learned a lot and made a 2-pound cheese wheel … with our own hands. 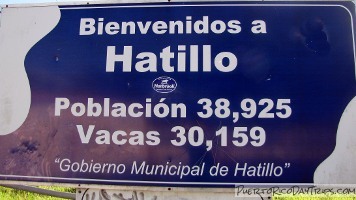 The town of Hatillo is located on the north coast, about 1 hour west of San Juan. It is the Dairy Capital of Puerto Rico, with almost as many cows as people! The town produces about ⅓ of all the milk consumed in Puerto Rico. So it only makes sense that you will find the Quesos Vaca Negra cheese company in Hatillo, right next to a dairy farm.

Quesos Vaca Negra makes five types of artisanal cheeses, and then flavors them differently. They open their "cheese factory" to the public, not only to learn about cheese-making but also to participate. I have been to a few cheese factory tours where you watch them make cheese, but I had never made it myself. 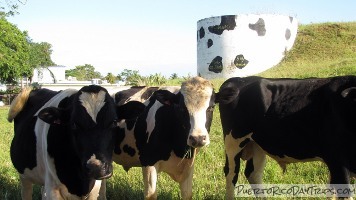 We got to Hatillo a little before the tour was scheduled, so we had some time to drive around and see a little bit of the town and the lovely rolling hills filled with with spotted Holstein cows — cows in the fields, cows in the barns, cows getting milked — and to get stuck behind the milk trucks and farm equipment going from farm to farm on narrow, winding roads.

The Quesos Vaca Negra factory is right next to a dairy farm, and shares the building with the Laboratoria de Calidad de Leche (Milk Quality Lab).

The tour started with one of the owners, Wanda Otero, talking for about an hour about the milk industry in Puerto Rico and how cheese is made. She shared loads of really interesting information about dairy farming and milk production in Puerto Rico.

As it turns out, Puerto Rico dairy cows are "free range" and hormone-free. They produce high-quality milk, but less of it (as compared to the same type of cows in the States), due to heat stress.

She went on to tell us about the local Health Department standards, and what needs to be checked before the milk will be accepted by the milk processors. That leads to how she got started in the cheese-making business.

She is a microbiologist and has a lab where farmers can bring their milk to have it analyzed. If the milk tests positive for some bacteria, they can determine where in the process the contamination occurred. If it turns out the a cow has an infection, they can advise the farmer on how to treat the cows to make them well — and their milk safe for consumption again.

Since dairy farmers have more milk than money, she trades her lab services for milk … and then uses the milk to make cheese. 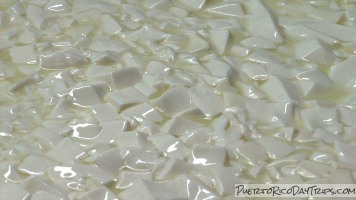 As it was explained to us, cheese-making is really pretty simple. Quesos Vaca Negra uses raw (non-pasteurized) milk for all their cheeses, so it still has beneficial enzymes in it.

First, the milk is heated and starter cultures are added to begin the conversion of milk into cheese. These good bacteria contribute to the final flavor and texture of the cheese. Next, a milk-clotting enzyme called rennet is added to coagulate the milk. This causes the milk to change from a liquid into a custard-like gel. Next, it is cut into curds and constantly stirred. Finally, the whey (liquid) is removed, and the remaining solids are packed for sale. Usually, the cheese is aged prior to being packed. It all sounded pretty simple and pretty quick.

So we donned our hairnets and latex gloves, and went into the back of the building where the cheese is made. That day we would be making a Capaez cheese. 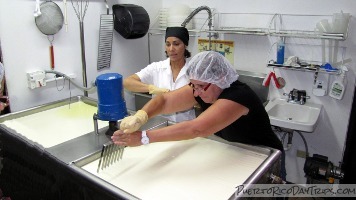 The milk was already in the 400-liter heating tray, and the cheese cultures and coagulant had been added earlier in the morning. Wanda explained the process, and then let us feel the cheese at this step. It was the consistency of a soft flan or a firm pudding.

We got to taste the cheese at this stage. It tasted like non-flavored yogurt, but with a firmer consistency. 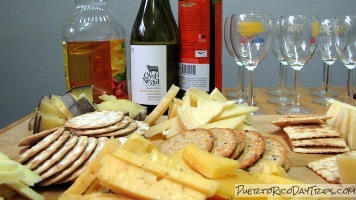 Wanda explained more about the cheese-making process, all the while stirring the cheese to make sure that it didn’t clump up again as it was being heated. While some of the other employees worked with the vat of cheese, we went into the other room for a cheese-tasting.

They had prepared a large tray of each of their cheeses and crackers, and offered us wine or juice to drink. We were able to try all five types of cheeses that Quesos Vaca Negra produces commercially, plus some special flavored ones. Wanda explained the differences in the cheeses, how they were made, and how long they were aged. Man was that yummy! 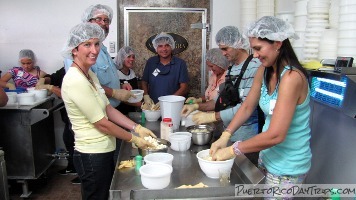 After our cheese tasting, it was back into the prep room, where we saw that the soft curds had transformed into clumps of thicker curds. Now it was time for us to make our personalized cheeses.

We all got our cheese-making equipment and picked the seasonings that we would add to our cheese. I added Provence herbs and a touch of garlic. All cheese also has salt added to it, though their recipes use about ⅓ the salt as typical store brands. There were other seasonings to choose from, like chives, onion, hot pepper, oregano, and even cinnamon.

We lined up at the cheese vat to fill our cheese bowl with curds. We added our seasonings to the curds, and squished it around with our hands to make sure the seasonings were evenly mixed, and the clumps were small. We tried to press out as much of the whey as we could. 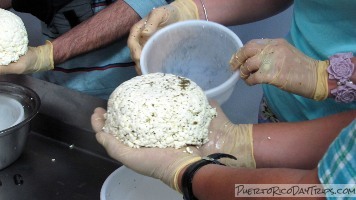 At this stage it is what I call "squeaky cheese" — it squeaks against your teeth. If you’ve ever had typical Puerto Rican white cheese (queso blanca) you know what I’m talking about. For queso blanca they would package the cheese at this point and it would be ready for sale immediately.

Since we were making Capaez cheese, it needs to be aged. So we turned our cheese out of the cheese mold. They stacked our cheeses so that some more whey could drain out, then they were moved into the refrigerated storage locker for 60 days of aging. We will go back in mid-July to get our wheel of cheese.

We also had the opportunity to see their milk-testing lab, and to purchase some of their packaged cheeses. All in all, it was a fun and interesting morning. I can’t wait to taste my cheese in July! 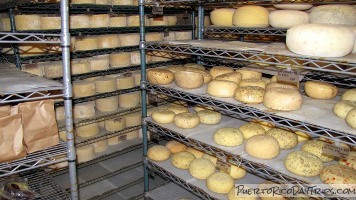 Currently, tours are offered on Saturday and Sunday at 10am and 2pm. Reservations (a least a week in advance) are required. They may have more tours in the summer months if there is more demand. They may also do tours for groups on other days.

The cheese that you make has to age at least 2 months. So, you either have to go back and get it, or they can arrange to ship it to you for an additional charge.

Kids have to be at least 6 years old to go on the tour. Younger kids will get bored.

Allow about 3 hours, start to finish. They can do a different tour, no hands on making, but it includes watching cows being milked (for groups).

You can visit the Quesos Vaca Negra web site for more information.

Maximum size group is 18 people, but usually more like 6 or 8 people on a tour.

The tour is in Spanish, but they can do a bi-lingual tour. Request that when you make your reservation. If you need an English-only tour, you can arrange a private tour.

Quesos Vaca Negra is located at Carr 493 KM 0.7, in Hatillo. From San Juan, take Route 22 west until it ends on Route 2. Turn right (east) on Route 2 and then a quick right onto RT 493. They have free parking in front and in back of the building.

Travel time from San Juan is a little over 1 hour. It took us about 1½ hours from Rio Grande.

There are 2 comments on this article. Add to the Discussion »

Hi! Thanks for that wonderful descripción of the tour! Excelente Wanda