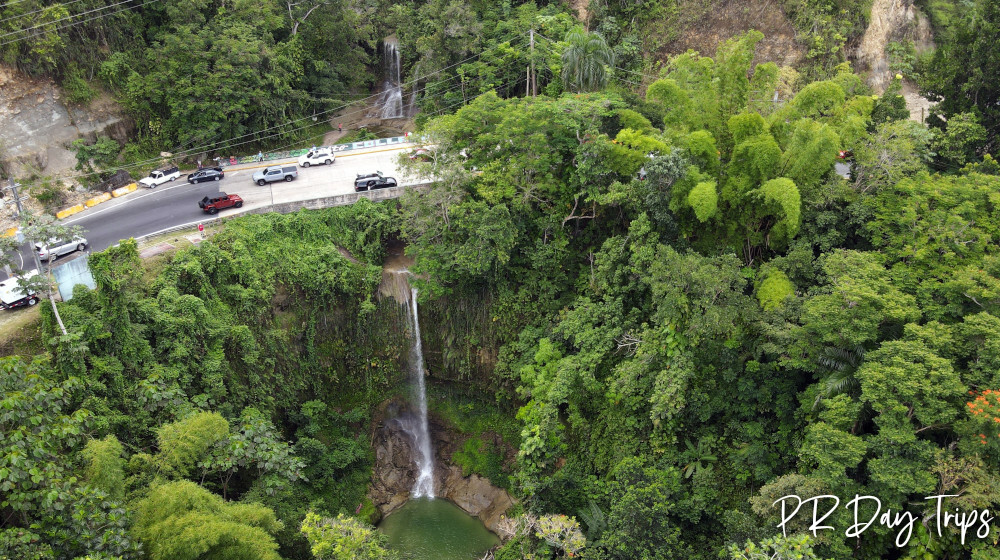 Salto Collazo: The Easy Side & the Other Side

Posted by Gwenn • Updated on 15 Feb 2021
Category: Nature, Porta Cordillera (Central)
Print This Without Photos
+ Print This With Photos 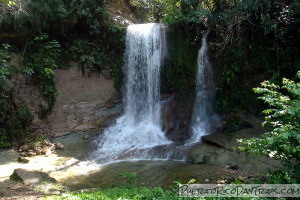 One of nature’s gifts to us are waterfalls. Power and beauty at the same time. Here is another easy-to-find waterfall in the central/west region of Puerto Rico. Salto Collazo is located in San Sebastian, right along a bridge on the main road as you are going east out of town. It’s impossible to miss, and oh so pretty.

I hear that when it hasn’t rained much, the falls are wimpy. Luckily, it rained every afternoon when we were in the area, so the flow was great. It was very pretty, maybe 25 to 30 feet high. The water drops into a nice pool at the bottom where you could swim.

You could set up a picnic on the rocks by the falls, if you don’t mind being just feet from a major roadway. Obviously, from the trash nearby, many people do have picnic there and then "forget" to clean up after themselves. Trash is an all too common disgrace here on the island.

The "Other Side" of the Bridge 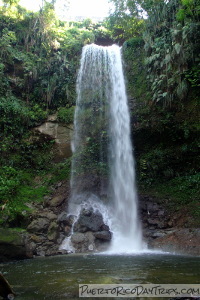 If you’re more adventurous, take a peek over the other side of the bridge. I just happened to do this, and guess what? The other side has a really tall waterfall. The bad part is, it is NOT easy to get to. But after getting a glimpse of what could be another beautiful waterfall, we were up for the challenge.

There was no way that I could see to get down from the main road, so we ended up driving down the side road, parking, and then making our way through the forest to the falls. I was amazed that we couldn’t find a well worn trail, since these falls were more private and much larger. After a few slips and a little bit of back-tracking, we eventually got down to the river. Once we got there, we turned right and walked upstream to the waterfall. (Note – I have seen more pictures of this fall on line lately, so I assume you will find some paths in now).

This waterfall is tall — maybe 100 feet. It drops into a small pool. But I would not swim there since, this is the sad part, it contained a bunch of garbage. And not just little stuff, but big stuff like car fenders, guard rails, and other metal garbage that either came over the falls or was tossed from the bridge. But, we just kept looking up at the falls, so we could avoid seeing the ugly part.

Salto Collazo is located east of San Sebastian on the way to Lares on Route 111 at KM 26.8. It’s right near the intersection of Route 111 and Road 448. As you cross the bridge the waterfall will be right there!