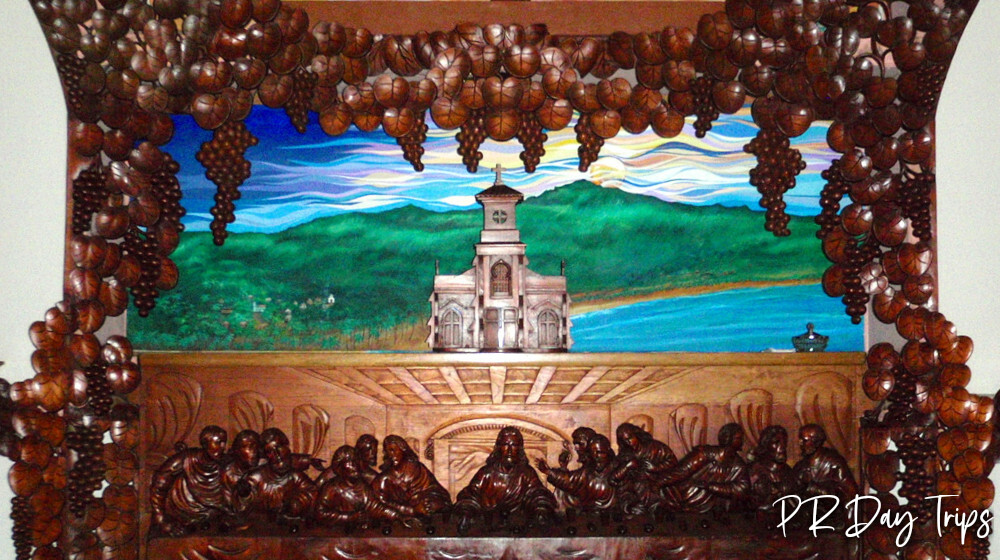 A Melding of Sacred Symbols in Luquillo 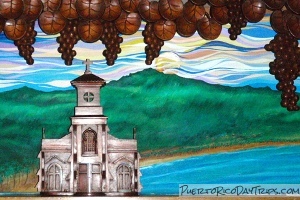 If you are in the Luquillo area and enjoy seeing unusual artwork, a quick stop at Saint Joseph’s Church in Luquillo is worth a visit. Its old and lovely facade holds a rare treasure inside — some of the most beautiful wood carvings.

While wood carvings are not unusual for a Catholic church, these ones are — they combine Catholic religious presentations, with nature and symbols from other cultures and religions. This is one of those rare and pleasant finds!

Saint Joseph Parish (or San José Iglesia Catolica or Parroquia San José de Luquillo in Spanish) is located on the main square in the town of Luquillo, just off of Calle 14 de Julio, on Calle Jesus T Pinero. It is really easy to find. The yellow facade is pretty enough, but the real treasure is inside. 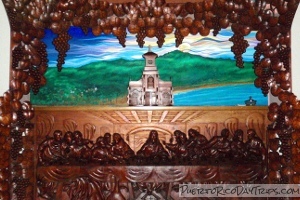 As expected, you’ll find the stations of the cross, statues of Mary and Joseph and the crucifix — all beautifully made of carved wood. And there is a lovely Last Supper carving behind the altar. But the real unexpected woodwork is the altar, the altar surround and the chairs and podiums at the front of the church (there are also some other carved pieces around in the sacristy and other, less public, areas).

It’s all lovely to look at, and understanding the meaning behind the carvings makes it all that much better. The church also has a pamphlet that describes the symbolism of the carvings and it explains why these symbols, that seem so out of place, are in a Catholic church to begin with. Once you read about the meaning, it makes the work even more beautiful. It’s the blending of nature, cultures and religions that binds the people of the world together. It represents the Church’s acceptance and value of the cultures that represent their congregation.

The first thing you notice in the church is the massive altarpiece. It has symbolism of the peaks of El Yunque, with huge bending palm trees that surround the crucifix. There are sea grapes and leaves around the tabernacle. And, if you look closely, you’ll notice the Taino symbols, coqui frogs and the Puerto Rican parrot among the more "traditional" images.

Everything here as a deeper, symbolic meaning that what you initially see on the surface. The Tainos believed that Yukiyú (the rainforest, that’s where El Yunque comes from) was a protector of the people during hurricanes. Just as the Catholic Church believes Jesus is the protector. The bending palm trees (which were originally brought to the island by the Spaniards from Africa), represent the hardships of life and the slavery that the blacks and Tainos had to endure. The sea grapes, vegetation and animals represent life, the love of nature and God’s gifts to us.

The altar has a beach scene of a mother pelican feeding her young. It seems so odd to be there, but they explain how the mother pelican feeds her young from her own meal (sacrificing herself and needs), just as they believe Jesus gave himself for his people’s life/well being.

Though there are quite a few carved pieces in the church, there used to be many more. Apparently, a number of them were removed when the church was "modernized".

All in all, it is really something to see.

If You Go to Visit

This is a Catholic church, so please be respectful. Call (or email) ahead of time to ask about entering and the church schedule. It is best to see the carvings when the Church is open and lit up (like right before or after a service). They have an active Facebook page that will have up to date times and happenings.

The church office (located just to the left side of the church) is open Tuesday to Friday from 9am-12n and 1pm to 3pm. You can ask them for a copy of the pamphlet that explains the carvings in the church.

Don’t forget to make a donation to help maintain the building.

Driving directions — From Route 3 in Luquillo, exit to the north at the light by the Playa Azul towers, turn right onto Road 193 and follow it until you reach the plaza. Find parking on the streets around the town plaza. The Catholic church Saint Joseph Parish (Iglesia Catolica de San José) in Luquillo is right on the main plaza.