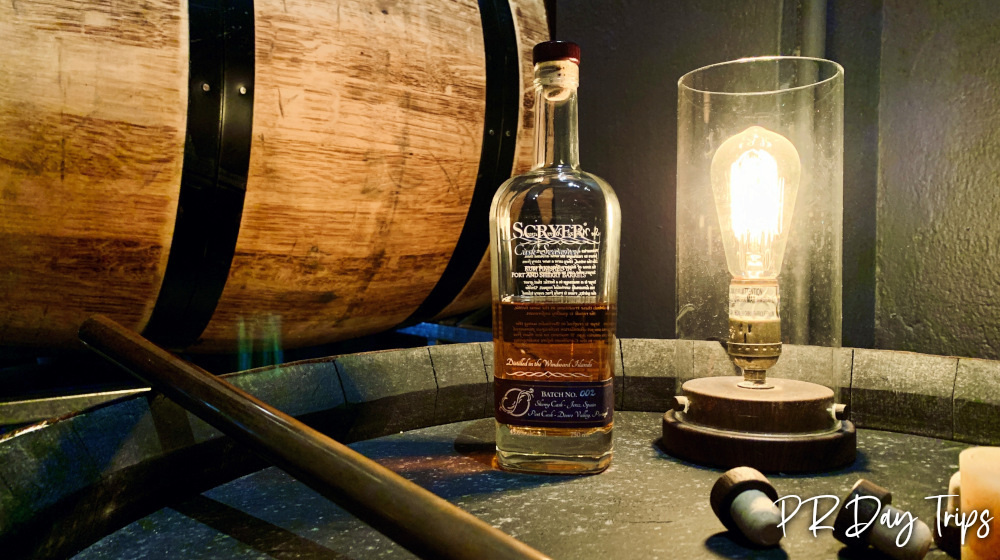 I love Old San Juan for so many reasons, and now we have found another reason – the Scryer Rum Bar & Barrelhouse! This cute little bar is more than that, it is actually part of the aging facility for Scryer Rum. They offer a quick, educational tour with tastings, they make some great drinks, and they also have a fun roof-top dining experience. Check it out! 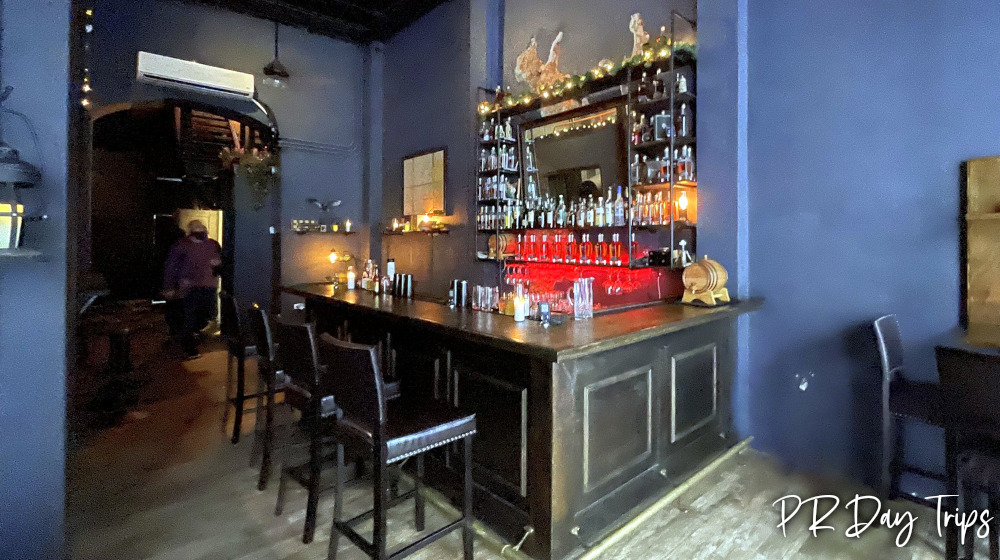 We went for a tour last week. They were offering two tours per day, and we opted for the early tour. The place has a cool, relaxed, and vintage vibe to it. You can chill out on the couches or at the bar, our at the tables/chairs off to the side. You will notice the aging barrels right there across from the bar.

Our tour was conducted by one of the owners (Garrett), a nice guy from Ireland who specialized in making whiskey. In 2015, he and his college friend Derek decided they could join their talents, create a business, and produce some great fine spirits (a delicious sipping rum). Hurricane Maria was the force that moved them to Puerto Rico. They started Scryer Rum at Derek’s family farm in Sabana Grande, making pot-stilled rum from molasses, and aging it in port and sherry barrels. 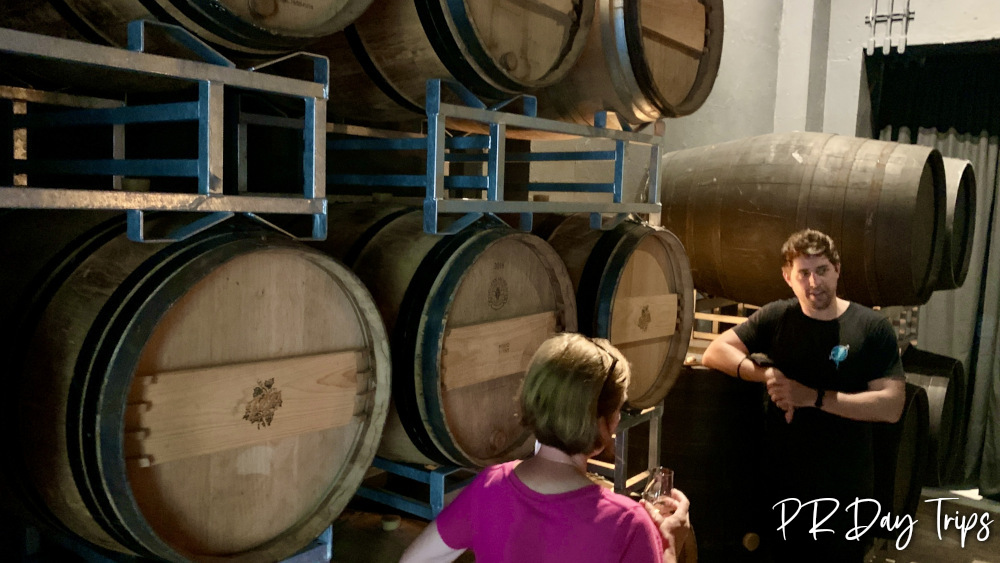 After time, they needed a store front close to the action, so they decided Old San Juan would fit their style. And the rest is history! They now do the finishing aging, mixing, hand bottling, and hand labeling right in the Old San Juan location. The distillation, and much of the initial aging, is done off site.

The tour is short (maybe 35 minutes), but interesting and personal. A small area means small tour! They are aging the rum for 5 years, finishing the aging in port and sherry barrels (separately), and the final product is a mixture of the two. Garrett explained the history of Scryer Rum, the rum-making process, and what makes their rum them different and unique. 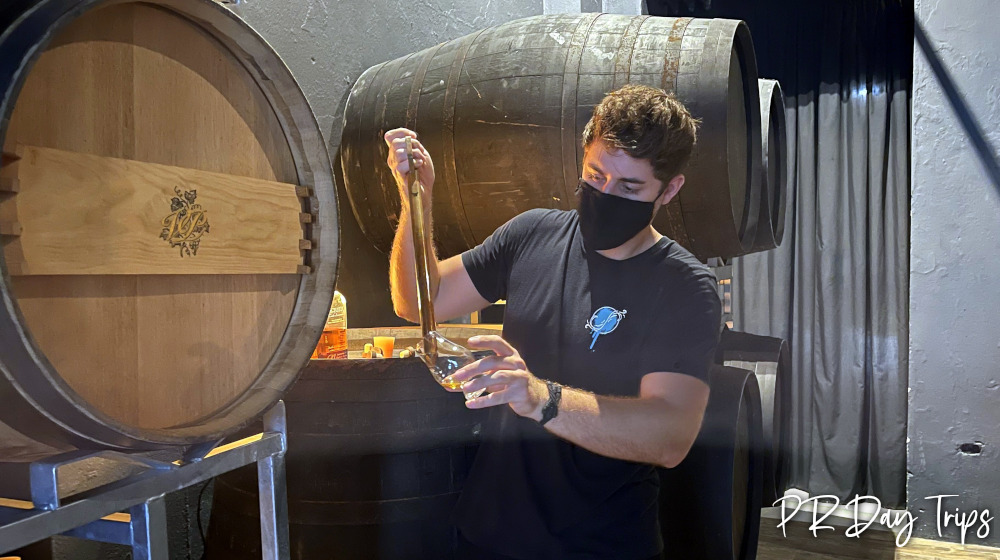 We tasted three rums. The first we tasted was from their first batch of bottled (finished) rum. The other two were drawn directly from the barrels — one aged in used port barrels, and the other aged in old sherry barrels. They were all very were very different, which was very interesting. The rum is bottled, and labeled by hand, with love. You can tell how excited Garrett is about making the rum, and sharing the experience with others. 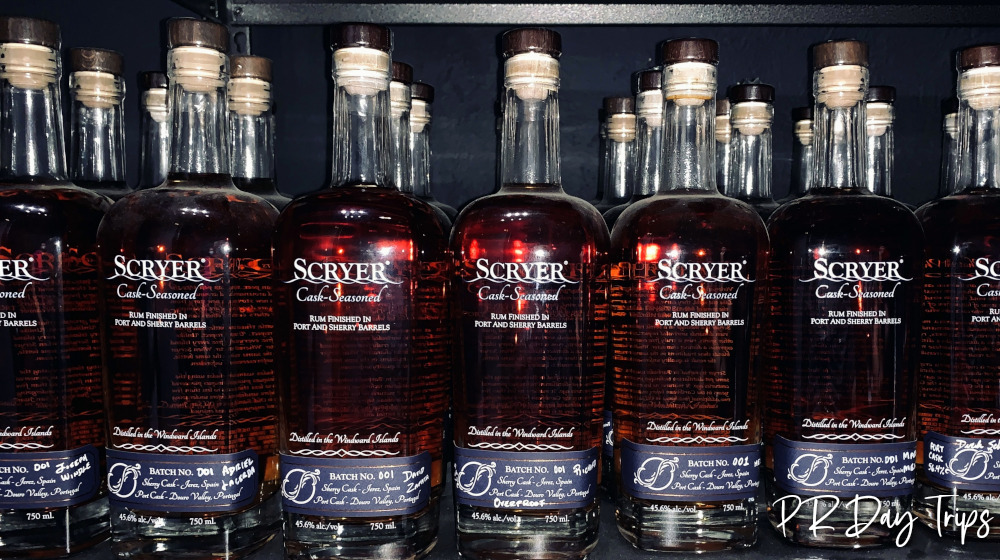 Since it was still early, the restaurant was not open yet, so we will have to go back again to enjoy that. But we went upstairs to see the rooftop area. The stairway is decorated with the original small pot still, and other equipment they used as they were just starting. The bar has a really interesting menu of rum cocktails (using Scryer Rum of course!), but they have a other drinks available too. The bartenders are pros! Scryer Rum is only available in Puerto Rico at this time, so stop in and buy a unique, handcrafted rum to take home with you. 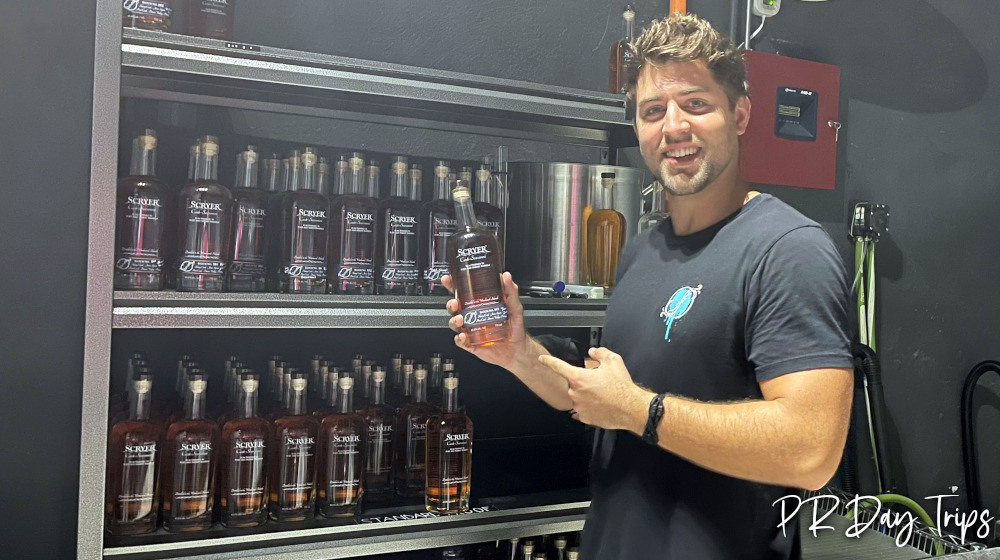 Their hours are Wednesday to Sunday from 12 noon to 1am (for the bar), and 5pm to 12 midnight (for the kitchen).

Scryer Rum is located at 259 Calle de Tetuan in Old San Juan, just a few blocks up from the #3 and #4 cruise ship piers.