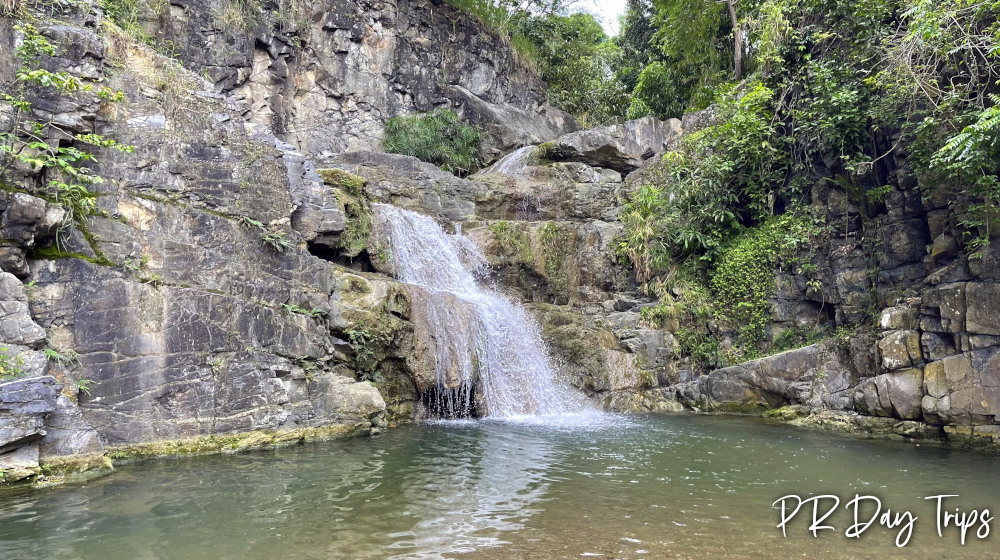 Posted by Gwenn • Updated on 12 Jan 2021
Category: Nature, Porta del Sol (West)
Print This Without Photos
+ Print This With Photos 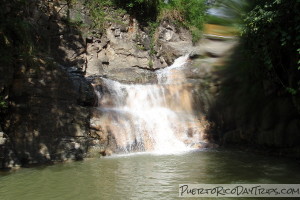 Thanks to a reader, we updated the directions on how to get down to the falls without going on the rocks.

Ray and I like to explore and find the little-known places. Recently (as you might have noticed), we are on a waterfall kick. We assume with all the mountain ranges and rainy forests Puerto Rico has, there must be a bunch of waterfalls that only locals seem to know about. So I have started asking around when we go out on the island. That is how we found El Ultimo Brinco waterfall in Rincon. Maybe it is not the most beautiful location, or the easiest to photograph, but we find it to be all about the experience.

During a recent trip to Rincon, we started chatting with a bartender. We asked him about local waterfalls and he said "El Ultimo Brinco is just a few blocks away". He gave us the typical "Puerto Rican" driving direction. We’ve heard it before — "go until the road curves and then turn" — which curve? The road is a series of switchbacks!

But we are adventurous, so we went exploring. We followed the directions as much as we could and then, when we felt we should be pretty close to it and asked a guy on the side of the road for more specific directions. 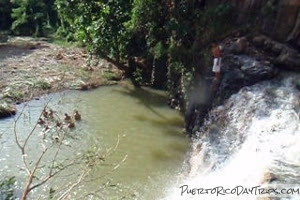 The falls are actually down a side street. We parked on Route 411 and walked just a short way down the side road until we could hear the falls and saw a bunch of local teens in bathing suits.

We starting looking for a way down — there is a pool at the bottom of the falls — which is about 40 feet down a really steep hill! I asked, in my poor Spanish, "How do we get down there?" The kids laughed and said "You jump". They were only half kidding!

To get to the bottom, we had to carefully climb down the actual rock waterfall, or we could jump in from different areas on the falls. I wasn’t in a bathing suit, so I followed them only so far (on the rocks on the side of the falls). But Ray followed the kids down and jumped in. That is how he got the pictures. If one doesn’t jump in, only the top of the falls are visable. Update 1/21- a reader commented that now there is ” a trail that takes you to the waterfall and the pool without climbing down the rocks of the actual waterfall.” At km 17.9

Once the kids realized Ray had a camera, they started the "show" of their jumps and dives! They are experienced with the falls and the pool below. I wouldn’t jump in unless I knew where it is deep enough to not to get hurt.

The falls are called El Ultimo Brinco (that translates to The Last Jump) because people have died jumping in. The cross at the top should remind everyone to be careful — the pool is only deep in the middle under the falls, the sides are not deep enough to jump into.

The falls themselves are about 30 feet tall. As usual, there was some garbage in the area. Some larger stuff (like car parts) on the top — probably thrown in off the bridge. But I thought the falls were nice. There is a pool at the bottom of the falls where people swim. The water wasn’t crystal clear. But it wasn’t bad, considering it had rained every afternoon during the week we were in Rincon. There was some turbidity from the mountain run-off. The neighborhood looked a little depressed, but the kids were friendly.

Safety Note: these are slippery rocks, so you need to be careful when walking around on them. Also, never go in the rivers during a rain (flash floods happen a lot ) or even a day or two after a rain, since the current can be too strong to be safe. People have been hurt/killed while playing in this river, jumping from the rocks and climbing around the rivers. Respect nature and be safe. And don’t litter.

Driving directions: Once we were in Rincon: We took Route 115 and turned onto Route 411 at the Puma gas station. There were parking pull offs on the side of the side of Route 411 across from the Communidad Campo Allegre sign. :The Falls are on the little side road right at that sign. If you want to go,you can walk down the road and before the bridge (right after the cross) on the right, you will see a little path in the grass at the 17.9 km mark — one has to step over the guard rail. You take it down for less than 2 min and you are at the waterfall. Watch for flashfloods in any river during or after a rain.