If you are interested in driving around the island visiting places of interest and plan using the Toll roads, we strongly suggest renting/activating the AutoExpreso Tag from the car rental agency. Currently RT 52, RT 66, RT 22, RT 5, RT 20 and RT 53 and are "changeless" (no place toll bucket to through change into and go…must go to the Movilcash lane (if there is one)), and the end part of RT 66 and parts of RT 22, Rt 5 and the Moscoso Bridge ONLY accept Autoexpreso...no way to pay cash/Movilcash at all. If your car has an AutoExpreso tag on the window, you will get charged automatically at any toll (except if you find one that takes “C” Cash), even if you use the "Movilcash R+" lanes. If you declined the tag on your contract and you use these toll roads, the car agencies usually penalize you with a hefty fee. Make your vacation easier and activate the tag when you get your rental! 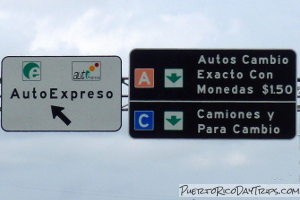 Welcome to Puerto Rico! Now that you are here — it is time to explore. Puerto Rico is a relatively large island — 35 miles wide by 100 mile long — compared to other Caribbean islands. And, there is so much to do and see.

Once you decide to venture away from the San Juan metropolitan area, your best bet (and the cheapest way to get around) is to rent a car. You may have heard horror stories about Puerto Rican drivers, but, in reality, it is not that bad! Here are some tips to make your experience driving in Puerto Rico as painless as possible.

Renting a Car: The Basics

There are plenty of national and local car rental companies available at, or near, the airports. Prices vary, so look on-line and shop around. All of the companies need to pick you up in a shuttle to take you to their lot (even though some are on airport property!). On-airport companies have an airport surcharge, so off-airport companies are usually a bit cheaper. Make sure to bring a copy of your insurance information “declarations page” (company name, phone and policy number and the fact that you are covered for accidents in rental cars in Puerto Rico), and of course your driver’s license (no special driver’s license is needed here for tourists). 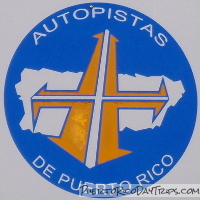 Rent the smallest car you are comfortable in, a small car is easier to maneuver on small roads and park in tight parking spaces. 4WD vehicles are not needed on the big island — the roads here are fine. Also, to avoid added expenses, make sure you check the parking situation at your hotel or resort. Sometimes there is a fee, or parking is not available at all.

There are number of toll roads in Puerto Rico, with each toll being between $0.75 and $3. We use an electronic toll pass called AutoExpreso, which is much like EZPass in the north-eastern US. The car rental places will rent you an AutoExpreso tag with the car. It lets you zip through the tolls instead of waiting in the cash lane. You really will need to have a tag because some of the toll roads no longer have a cash lane and the Movilcard lanes will read the pass on the car’s window.

You may also want to consider a GPS unit (also available from the car rental companies), but it is not necessary if you have a good driving map.

Now that you have your rental car, you are free to explore! There are a few things you need to do before going too far. First, your best bet is to get a good driving map. Personally, we just use our smart phone and Google Maps and it works great. But if you want a printed map, you can call or write to the Puerto Rico Tourism Company (PRTC) for a free driving map, provided you still have a month or 2 before your visit. You can also buy maps online.

If you want to wait until you get here, you can buy driving maps at gas stations for a couple bucks. You can also stop into one of the Puerto Rico Tourism Company offices to pick up a free map. There’s a PRTC office right at the SJU airport. Your hotel or resort may also have free maps available — check at the front desk. 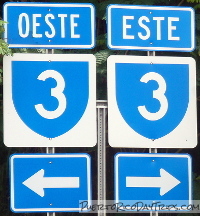 You can use a GPS unit, which will help a lot. But don’t rely solely on it, since sometimes you won’t be able to get a GPS signal and, oftentimes, places in Puerto Rico don’t have addresses that a GPS unit can understand. Although, if you have the GPS coordinates of a location, you should be in good shape.

You could always opt to ask someone for directions. Although helpful, many locals give very landmark-specific directions, without using highway numbers or compass direction. If you don’t feel comfortable with that (though they are usually pretty accurate), call your destination for something more specific!

Another thing to take into consideration is how long it will take to drive from point A to point B. Don’t expect the time estimates given by Google Maps or MapQuest to be accurate. For example, those services don’t realize that it can sometimes take 2 or 3 hours to drive 60 miles here on the island.

Rules of the Road

Puerto Rico’s driving rules are almost the same as any US State. We drive on the right side of the road, just as in the States. Road conditions are usually fine, though there will be some potholes here and there. Road signs use universal traffic signs — the shape and colors are the same as in the States, but the words will be in Spanish (see below for some translations). Seat belts are mandatory and must be used by all people in the car. Child seats are mandatory for kids 4 and under, booster seats required for children until 9 years old. Children until 12 years old must ride in back seat. Note- these car seat rules do not apply to taxis or school buses. 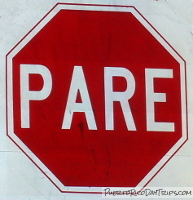 There are six toll roads on the island — Route 66, Route 52, Route 22, RT.20, RT 5 and Route 53 — all with 55-65MPH speed limits. However, you need to be aware of how much the toll will be and which lane to get in. Note- RT 5, RT 22, and the end of RT 66 now only accept the Autoexpreso tag (“solo Sello”), so you must have approved payment for the tag when renting the car to use these roads to avoid fines at the rental agency. The AutoExpreso lanes are on the left (ALWAYS!) or in the middle marked with a “T”. You can ONLY USE THESE LANES WITH AN AUTO EXPRESO TAG, or you will be charged a HEFTY fine! Some of the tolls are now (8/11) Changeless- you need to buy a MovilCash card or use an AutoExpreso Tag only, so you will have to rent the tag along with the car. The Tarjeta MóvilCash (a toll card)is available for these highways, but you need to wait on line in the Venta y Recarga Plus (R+) lanes (these are on the extreme right). You pay $5.00 and they start off with a balance of $4.00 to pay the tolls (only using the R+ lanes). You can buy it with dollar bills (no change, credit or ATH) and any change due back will go on the the balance. If you are on a road that allow cash at tolls, you can use the middle lanes marked with a C. If your rental car has an AutoExpreso tag, and you use the R/R+ Movilcash lane, the toll will be charged to your toll tag, even if you payed the toll with money/Movil cash card.!

Finally, and this is important, the San Juan area is very congested — there will be traffic that will slow you down. Guaranteed. Leave plenty of time if you need to be somewhere at a certain time and you will be traveling on roads near San Juan. Rush hour going toward San Juan is from 6am to 9am. Rush hour going away from San Juan is 4pm to 7pm. Try to avoid going toward the city in the morning or coming back through the city in the afternoon at those times. The traffic can easily turn a 45-minute trip into a 3-hour nightmare (we know, we’ve done it)!

As I’ve already said, 99% of the driving rules are the same as in the States. And most people actually follow those rules. But there are a few crazy drivers and there are some habits that are not legal, but occur all the time. 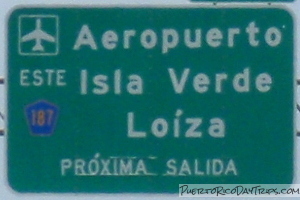 Your best bet is to drive defensively and be alert of the other drivers. Obey the rules as you know them and you should be fine. You will notice many cars with "fender-bender" dents and scrapes, but amazingly, there are relatively few serious accidents. Be alert and be safe. 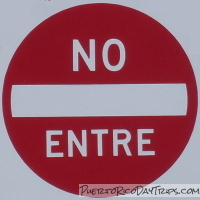 Though we use universal traffic signs, the writing on traffic signs is usually just in Spanish, so it is useful to know some translations.

Other Things to Keep in Mind

Just be aware of the other drivers around you, take your time driving and try to relax. You are on vacation, afterall. Now grab your keys — get out and explore!