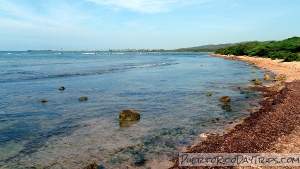 Guánica encompasses a large area with lots of shoreline — which, in turn, means lots of beaches. However, most of the area beaches are not protected coves, so you have to be careful of the water conditions.

On a recent visit to the area, we stopped in to see a few of the beaches and, while we didn’t find any hidden gems, we did find some that might appeal to the outdoor enthusiast.

Once in Guánica, we drove east on Route 333 as far as we could (the road turns to dirt and there’s a gate across the road) and parked the car. We walked a little farther east, then turned around and backtracked down Route 333 (moving the car as necessary). You could walk even farther east than we did, as Route 333 continues along the shoreline. 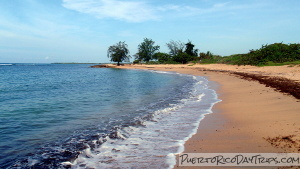 The first beach we stopped at was Tamarindo Beach. It was a nice looking beach. This area is home to many threatened and endangered species, including the dry forest anole (a type of lizard), the hawksbill and leatherback sea turtles, the Puerto Rican crested toad, the blue-tailed ameiva (another type of lizard), and the brown pelican.

When we went, it was "closed" due to it being mating season for the Puerto Rican crested toad. Who would have known? When it rains, the parking lot gets little ponds that the toads uses for mating. So you can’t bring your car into the lot. But of course you could walk in. It looked like a decent beach, and there was a coral reef out a bit which made a nice wave break, so the water was pretty calm the day we went. We did not go in the water though.

Heading west a little bit, we came to Aroma Beach — and the name is no joke. This beach is narrow and rocky, and it had a lot of sea grass on it — which made it kind of smelly. There was also a coral reef at this beach that looked like it helped keep the water calmer near the beach. 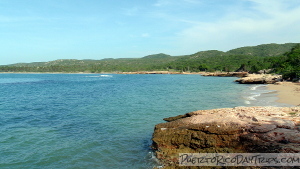 Continuing west, we came to Atolladora Beach, aka Ballena Bay. This is not a swimming beach, as there were signs all over warning of the strong under tow, currents and shore breaks. But it was pretty — limestone ledges and a small cove. Good for exploring and photography.

This is mainly a hanging out beach — there were picnic tables and trash cans. It is a narrow beach, but there is a little sand so the kids could play near the shoreline.

After we finished exploring this area, we hopped into our car and followed Route 333 west to Balneario Caña Gorda. It’s located at KM 5.9, right next to the Copamarina Beach Resort. 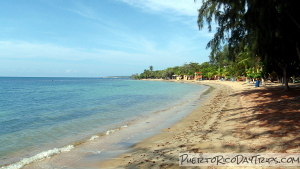 , Balneario Caña Gorda maintains a certain water quality, and has educational and ecological information posted around the beach. This is a beach where families can really enjoy themselves.

The water was calm, the sand was soft. There was a large roped off area for swimming, with life guards on duty. There were loads of picnic tables in the shade of trees and under shelters. And lots of restrooms, changing areas and showers available. During high season there are chair rentals and a snack bar available. As with all balnearios, there is $4 or $5 charge for parking.But it is not be open everyday…usually open Wed- Sun, but not major holidays.

There are a few other small beaches along Route 333, but they were not too noteworthy for swimming nor sunbathing. There seemed to be more fishing beaches. 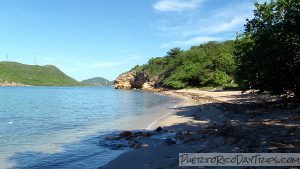 We did get a kick out of Playa Jaboncillo, which is one of those fishing beaches. The morning we went (mid-week about 9am) it was a regular Lovers’ Lane!

There’s this rutted, rocky dirt road that leads from the paved road to the beach. We left our car on the paved road and walked down to the beach. Apparently, people drive down this horrible dirt road in search of privacy. There were 3 or 4 cars parked near the beach. The beach itself looked OK, but the ambiance — parked, running cars, with fogged windows — was not my thing! Skip it.

Though not accessible by car, I have to mention Gilligan’s Island, located just off the coast of Guánica. Gilligan’s Island, sometimes referred to as Guilligan Island by locals, is a small island that is managed by the Departmento de Recursos Naturales y Ambientales (DRNA) — that’s Puerto Rico’s Department of Natural Resources. The island is part of the Biosphere Reserve of Guánica. We rented kayaks and spent a couple hours over on the island snorkeling and exploring. If you’re into that kind of thing, you can add this to your list.

We had wanted to get out to Santa Beach on Route 325, but the town was doing waterline maintenance so the roads around the beach were closed. Maybe next time.

All of these beaches were over-run with mosquitoes when we went in September (prime rainy season). Bring bug spray — you’ll need it!