Yes, there still loads of these fish around. If people know of restaurants serving lionfish, please mention it in the comments.

12/14- Amazingly, just 4 years ago when we wrote this article, Lionfish sightings were not too frequent. Sadly, these beautiful but voracious fish are now a pretty common sight in our waters. We have seen them snorkeling, in just 6-8 feet of water. People need to be aware of these dangerous fish and hopefully we can get some hunts going to “cull the herd”. 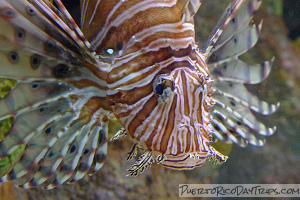 Lionfish are beautiful fish that are always popular in aquariums. They have distinctive red, maroon, brown and white stripes on their head and body, fan-like fins, and spines that are capable of delivering a painful puncture wound. There has been news over the past 10-15 years about a Lionfish "invasion" in the waters of the Atlantic and Caribbean. There have also been newspaper articles about recent Lionfish sightings around Puerto Rico.

As a SCUBA diver, I’ve always paid attention to these stories, with a sense of fascination and curiosity. It wasn’t until I was on a recent SCUBA outing in Humacao, on which there was Lionfish sighting, that I really took the time to learn more about these fish and problems they are causing in their "new home".

Invaders from a Distant Ocean 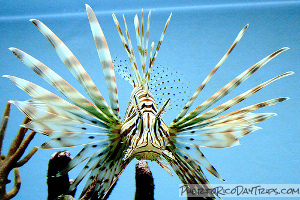 There are two fish species commonly referred to as Lionfish: the Red Lionfish (Pterois volitans) and the Devil Firefish (Pterois miles). The Red Lionfish is native to the tropical and subtropical regions of the Indian and Pacific Oceans, while the Devil Firefish is native to the waters of the Red Sea. These two species are almost identical in appearance. The only sure way to distinguish between them is through genetic analysis.

Lionfish are now firmly established in the Atlanic Ocean and around the Caribbean Sea. They’ve been documented along the Atlantic coast since 2001 in the Carolinas, Florida, Bermuda, and even as far north as New York and Rhode Island. They can be found throughout the Caribbean in the Bahamas, Jamaica, Dominican Republic, Cuba, USVI, Puerto Rico, Belize, Mexico, Aruba … pretty much everywhere.

How Did They Get Here? 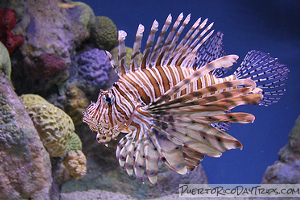 In a word … people. There is no consensus on how the Lionfish first arrived in the waters of the Atlanic Ocean and Caribbean Sea, but there is agreement that their arrival was due the the actions of people — either accidentally or on purpose.

The most probable explanation is that the first Lionfish in the Atlantic Ocean came from the aquarium trade. Lionfish are very popular among saltwater aquarium hobbyists. They are extremely beautiful fish. But, they can sting you. And they’ll eat anything else that is living in the aquarium with them. And they can grow to be larger than expected. So you could imagine that someone might have released a "pet" Lionfish that they no longer wanted.

Then there is the story of a beach side aquarium that accidentally fell over and dumped a half dozen Lionfish into the ocean. There is also the possibility that juvenile Lionfish arrived in the ballast water of ships travelling from the Indo-Pacific regions.

No matter what the source, they are here to stay.

Why is this a Problem? 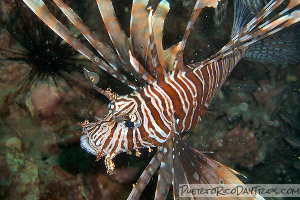 The problem is two-fold: the Lionfish’s effect on the reef and on people’s use of the surrounding waters.

The Lionfish is a voracious feeder — it will eat just about anything that it can catch, which includes native reef fishes. And it has no natural predators in the Atlantic and Caribbean regions.

This means that Lionfish have a practically unlimited food supply, and nothing living on the reef to keep their numbers in check. So they can reproduce and grow virtually without bounds. There’s the possibility that Lionfish will decimate the local population of reef fish, including commercially important fish and crustaceans.

Since the Lionfish can sting when touched or stepped on, swimming in water that Lionfish now call home can be somewhat dangerous, or at least uncomfortable, for people. There was at least one article in a local paper back in July (the big beach vacation month here) about avoiding a particular beach because of Lionfish sightings.

What is Being done about this problem? 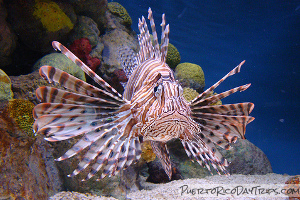 Local fishermen and divers up and down the Atlantic coast and throughout the Caribbean are being encouraged to report Lionfish sightings. Some are also being trained in the methods for safely collecting individual fish when they find them.

The majority of people studying this problem agree that there is little that can be done to reverse the Lionfish invasion. Collecting individual fish will have little, if any, impact on the Lionfish population overall.

Studies are being conducted about the effect of introducing natural Lionfish predators into the Atlantic and Caribbean waters, such as large groupers and sharks.

Apparently, Lionfish are tasty to eat (for humans) and there has been some encouragement to introduce this fish into our diet. I did read about a culinary competition to find some good Lionfish recipes … so don’t be surprised if you see Lionfish on the menu of your favorite seafood restaurant some day!

What to do if you get stung by a Lionfish 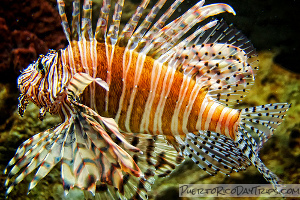 First and foremost, if you see a Lionfish don’t try to get close to it, don’t try to pick it up and don’t try to catch it (unless you possess the proper training and tools to do so).

Lionfish are not really aggressive toward humans — they are not going to seek you out to sting you while you’re swimming. More likely than not, a Lionfish is generally harmless unless they are accidentally, or deliberately, threatened or disturbed. If you get stung by a Lionfish it would probably be because you stepped on it or brushed against it.

Lionfish stings are extremely painful but not usually life-threatening. The venom (and the pain) tends to remain localized near the injury site, though some people may experience a whole-body (systemic) reaction to the sting.

If someone is stung by a Lionfish, the first thing to do is to call for help from a medical professional (a lifeguard, paramedic or 911).

The next thing to do is check the person’s airway, breathing and circulation, that will be some of the first bits of information the medical professionals will need. Lionfish venom tends to break down with the application of heat, so immersing the injured area in hot water or applying hot compresses should help relieve some of the pain. Once the pain is (somewhat) under control, check the wound for any pieces of the Lionfish spine that might have broken off. Then clean the wound, apply a sterile dressing and monitor the site for infection.

If you want to read more about Lionfish, you can refer to some of the references we used in preparing this article