Printed on 26 Nov 2021 from
PuertoRicoDayTrips.com 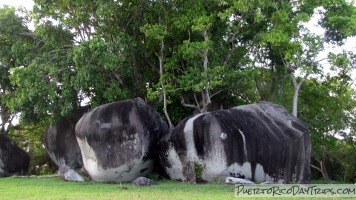 Did you know that Vieques has been a favorite stop for travelers to the Caribbean for thousands of years? Seriously … there is archaeological evidence — El Hombre de Puerto Ferro (or Puerto Ferro Man).

The skeletal remains of a 4000 year old man were found on Vieques, surrounded by large boulders. The skeleton has been moved, but the boulders remain. While not a "day trip", it is worth taking a 10-minute stop to see the site, especially since you’ll be driving right past it if you go to Balneario Sun Bay. 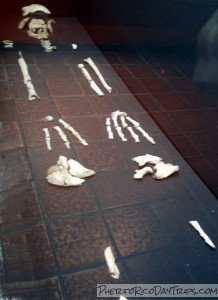 In 1991, archaeologists unearthed the skeletal remains of an ancient man, along with other objects, at an inland site on the south side of the island of Vieques. This discovery pinpoints Vieques as one of the earliest known pre-Arawak stone age cultures in the Antilles. Through radiocarbon dating, the remains are estimated to be from about 500-2300 BC.

The remains were buried in an area surrounded with huge boulders. No one knows if the boulders where there naturally, or if they were somehow moved to this spot for some reason by the ancient people. There are no other huge boulders in the area.

The skeletal remains were removed, and the area was excavated in the hope of finding more artifacts. Today, all that remains at site are the boulders. 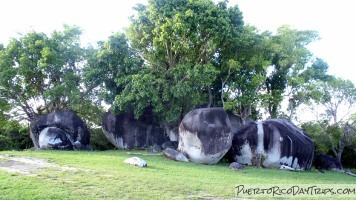 The skeletal remains are on display at the Museo de Historia, Antropología y Arte @ UPR .

There is a dirt road that leads in (maybe a 4-minute drive) from Road 997 to the rocks. They are pretty impressive, and look so unusual and out of place in this flat field.

I have to say I was very saddened to see that many people don’t seem to value this archaeologically-significant site. Even though recently cleaned-up by volunteers on Vieques, the road in and the wooded area behind the rocks seem to be used as a local dump. 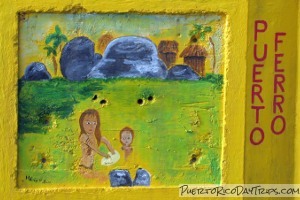 I have heard some people also occasionally vandalize the rocks themselves, and people who actually do care come in from time to time to clean the rocks. I really hope people get educated on the cultural and historical value of this area and treat it with more respect.

The site is just east of Balneario Sun Bay, on Road 997 KM 6.5. There is a bright yellow cement marker that says "Puerto Ferro" on the north side of the road. The road in to the site is a dirt road, that is kind of bumpy. The short 4-minute drive ends at the boulders.

There are 2 comments on this article.

Excellent! Thanks for the info!

El Hombre de Puerto Ferro is now on display at the new temporary exhibition "Guaca: a visit to Puerto Rico's indigenous past" (open July 18 - through December 18, 2013). The exhibition features hundreds of artifacts -stone tools, clay pots, beads, daggers, clay stamps, ceremonial seats, idols, petroglyphs, and more- created by the different cultures that migrated to, populated, and lived on this Island through an estimated 4,000-years span.