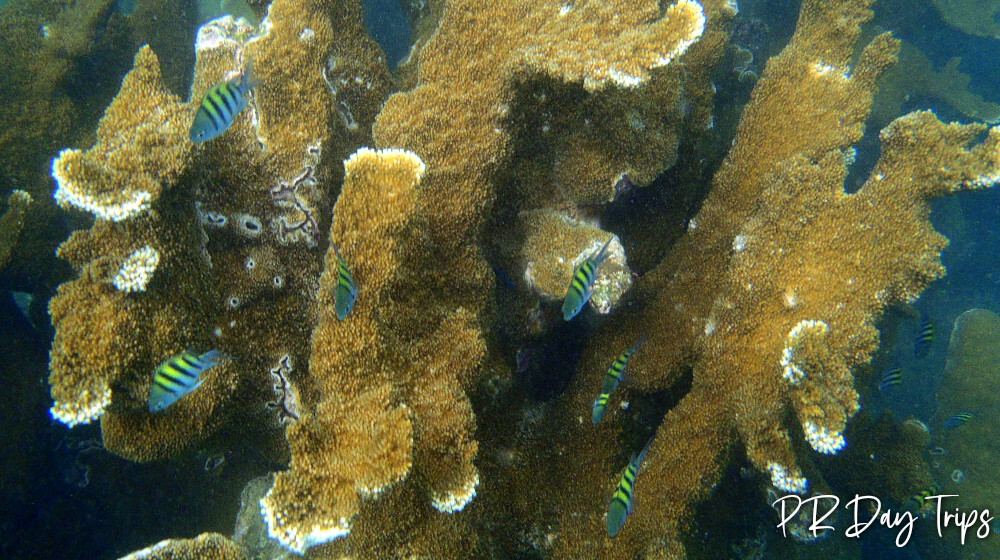 Snorkeling in this area is usually safe only in summer , on calm water days 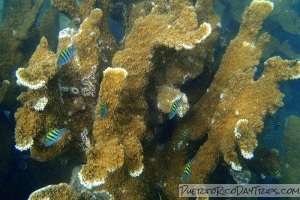 Ray and I really enjoy snorkeling, but oddly, there is very little good snorkeling available right from shore of the big island of Puerto Rico. But if you go to the west coast in the summer, Tres Palmas Marine Reserve in Rincon offers great snorkeling at Steps Beach. A forest of Elk Horn coral, with all sorts of marine life, can be found there.

In the winter, the Rincon beaches are known for their great surfing waves. And Tres Palmas Marine Reserve can have massive waves. You may get lucky with a calm morning, but be aware of changing conditions. But usually, starting in mid-April and running until about October, the waves die down and the beach becomes a nice swimming beach.

Tres Palmas Marine Reserve has a large coral reef that runs parallel to the shore for about ¾ of a mile and offers really nice snorkeling. It consists of a few named areas (Dogman’s Beach, Little Malibu Beach), but the most popular and accessible area is Steps Beach (named after the set of concrete steps sitting on the beach).

When the conditions are right, the water can be smooth as glass, crystal clear and you get amazing snorkeling. But even with small waves, you can swim out past the breakers and still see a lot. They say the best time to go is in the morning, as the waves usually get larger as the day progresses.

Our Afternoon at the Beach

We have tried to snorkel here a number of times over the past few years, but the seas have always been too rough. But just last week (early August), we were lucky enough to get an afternoon of fun snorkeling in at Steps Beach. There was the occasional 2-3 foot swell breaking close to shore. This caused a bit of turbidity in the water, so we just snorkeled farther out and the clarity was better. 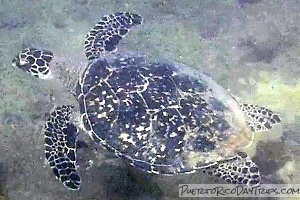 We tried snorkeling directly out from the "steps" area and also to the far left of the "steps" (out from the big house with a red roof). Both areas were nice. We saw a load of beautiful Elk Horn corals, number of different fishes, and even a turtle. There were also other types of corals and sponges.

You have to enter the water in an area that is sandy (there is a lot of rock/coral right at the shoreline in places). There is a quick drop off as you enter, so be aware of that. We found fins to be a great help since we were out pretty far and there was a bit of current in places.

It used to be that the road to Steps Beach was not marked, but now there is a Steps Quick Lunch truck sign (and at the beach the truck where you can buy food and beverages). The road is just off of Route 413 at KM 1.7. There is some parking at the end of the street, and then additional people park along one side of the street.

The beach itself is thin, maybe 10-15 feet wide, and there is some natural debris on the sand (like the almonds from the shade trees along the edge). We set up our blanket out of the sun, under one of the almond trees. The beach is also pretty for pictures or it is GREAT for watching the sunset. 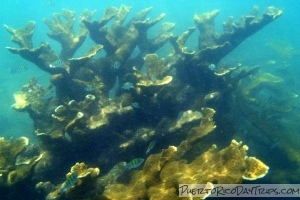 Snorkel gear is available for rent at some of the dive and surf shops for about $15-$20 a day. If you plan on snorkeling a few days, it is usually more economical to buy a set (either at home and bring it, or once you are here in Puerto Rico). If you are staying at one of the many Vacation Rentals or Inns in the area, ask them if they supply snorkel gear.

When snorkeling, you need keep an eye on the surf conditions and be flexible with your plans. One day the seas can be real rough, and maybe the next day the water can be calm as glass. And don’t forget the sunscreen!

To get to Steps Beach follow Route 413 to KM1.7, then turn toward the ocean.

Thanks to our friends at the Pineapple Inn for the snorkel gear information.