Puerto Rico Day Trips Travel Guide
Current COVID-19 Restrictions (updated 01 July 2021) — 🚩 The new executive order goes into effect 05 July 2021 and will be in effect through 25 July 2021 🏠 There is no curfew, and everything may be open 24/7 😷 Masks covering mouth & nose are required for unvaccinated people and children 2-11 years old. Masks are required for everyone in healthcare facilities 🛒 There is no capacity restriction on stores, businesses, restaurants (indoor/outdoor), etc ⛴️ Tourists are permitted on the ferry to both Culebra and Vieques, unless the island mayor says differently. 🌳 El Yunque National Forest is open, but reservations are required for entry (available at Recreation.gov) ⚠️ All domestic travelers arriving in Puerto Rico are required to submit a travel declaration with contact tracing info, and EITHER proof of vaccination OR proof of a negative COVID-19 test (molecular-based or antigen). If you are arriving from the States and you are fully vaccinated, you do not need a COVID test. If you are un-vaccinated and do not have negative results when you arrive to PR, you have 48 hours to produce those results. Otherwise you will be fined $300 per person. The option to voluntarily quarantine has been removed. See the PR Government Travel Safe site for details, and to submit your contact tracing information

Printed on 27 Jul 2021 from
PuertoRicoDayTrips.com

A Visit to the Little Museum on Campus

2/21 Currently the museum is not open to the public. 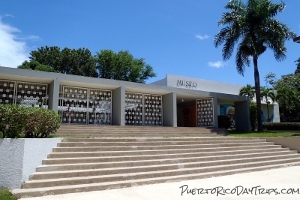 I have known about the museum on the University of Puerto Rico’s Rio Piedras campus for quite some time, and I have wanted to visit it, but I had heard it was closed.

During a recent visit to the Puerto Rico Art Museum, I was told that the Museum of History, Anthropology and Art (Museo de Historia, Antropología y Arte, in Spanish) was actually open. Having heard that, I was on a quest to find out, for myself, what the real deal was.

As it turns out, the actual museum proper is currently closed to the public. Apparently, the Tren Urbano goes underground in the area near the museum, and vibrations from the train have caused structural damage to the museum (oops!).

However, since they have so many wonderful objects, they have opened two small sections in another wing of the building. This smaller museum features some permanent displays, as well as some rotating exhibits that change every few months. I really thought this small museum was full of truly amazing pieces.

Here’s a hint — Make your first stop in the office-looking area and ask at the window if someone could give you a tour, or provide English translations, before going into the museum. We met some wonderful guides who were very enthusiastic about sharing their knowledge the museum and the pieces on display. It is best to call or email ahead to make sure there will be a guide available. 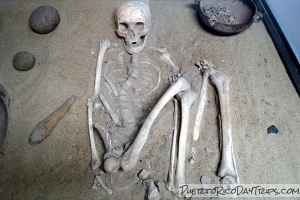 The foyer of the office area is currently the temporary home for some of the museum’s permanent exhibitions. This is where you will find some treasures that are always on display to the public.

First, there is an Ostiones Cultural Burial site which was uncovered from the area that is now Balneario Monserrate in Luquillo! I had no idea that when I go to the beach, I am playing on an old Indian burial ground. This new info is a bit spooky in a Poltergeist kind of way! 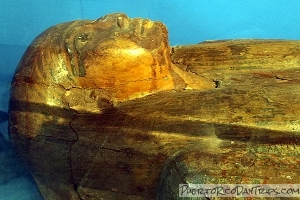 This display features the remains of (a woman, a man and an infant from the Ostiones era (460-1435 AD). Those were the indigenous people that were in Puerto Rico before the Tainos.

A collection of Egyptian Funerary objects is also on display in this area. They have two mummies (one wrapped in cloth, one unwrapped), a mummified cat, a nice wooden sarcophagus, some canopic jars (used to preserve internal organs) and statues. These are the only Egyptian mummies in the Caribbean! Kind of unusual to see. 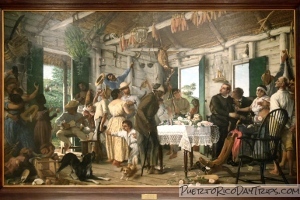 Across the (outdoor) hall from the office area is the temporary home for their rotating exhibits and the permanent home of the pièce de résistance The Wake. This was the item that I was most interested in seeing — the original painting El Velorio (The Wake), by the 19th-century artist Francisco Oller, painted in 1893.

This huge and beautiful painting, depicting a jibaro (country-folk or hillbilly) wake scene, is fantastic. One could study each section of this piece and see something new and interesting. Indeed, many historians that have studied and interpreted this painting over the years. 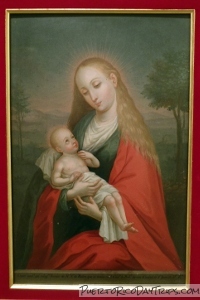 Our guide pointed out some of the oddities that Oller put in the painting, and explained some of the particulars that are examples of life back in the 1890’s for the poorer class. I love this piece and our guide really helped bring it to life.

This painting is a huge piece that can’t easily be moved, so make sure to contact the office before visiting to make sure you will be able to see it (it will not be available during the time when the exhibits are being rotated).

In the same salon you can view 9 paintings by the Puerto Rican artist José Campeche y Jordán. I enjoyed seeing two original copies Campache did of the same painting, La Virgen de Belén. One of the paintings was modified to conceal her breast because it was considered to be too risque for where it was being displayed.

They occasionally loan out these Campache paintings so they may have something else on display. 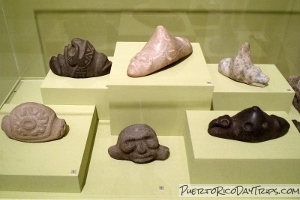 This is the same area that holds the rotating displays. During our visit in August 2010, the rotating exhibit was Artefactos: Tecnología Indígena (or Artifacts: Indigenous Technology). It has about 12 cases full of artifacts made by indigenous peoples of the Caribbean and mostly Puerto Rico. The signage by each case explained (only in Spanish) what the pieces were, how they were made and what they were used for. Really interesting stuff.

Contact the museum and find out what exhibits will be on display when you plan on visiting.

The museum is just inside the gates of the UPR Rio Piedras campus off of Ponce de Leon Avenue. The building, designed by Henry Klumb, is nice, with an open courtyard that contains some sculptures. There is free parking on the side/behind the museum, but you must drive in and go around a triangle park area to get to the museum (as it’s parking entrance is on a one way street) which will be on your left after you go through the gate. 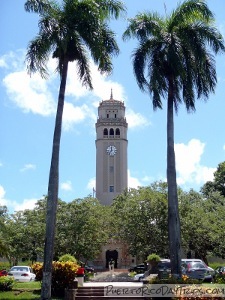 I plan to go back as they rotate the exhibits, and I hope they are able to get the funding necessary to repair the real museum.

After your visit, you may want to spend some time walking around the UPR campus. It is a lovely place, full if shaded courtyards and walkways. A nice escape from the heat in the city!

While you’re in the area, take a short drive (or walk) to the Rio Piedras Market for a quick meal or to pick up some local fruit or vegetables.

Admission to the museum is free, as is parking.

The museum is open Monday to Friday from 9am until 4:00pm and Sunday from 12 until 5pm. The museum is closed on Saturdays, holidays and during university recess. They offer guided tours M-F (in Spanish) 9am, 10:30am, 1:30pm and 3pm.

There are 2 comments on this article. Add to the Discussion »

Try contacting the museum directly, they have Facebook: https://www.facebook.com/museouprrp/ or a web page : http://www.upr.edu/museos-2/museo-de-historia-antropologia-y-arte-de-rio-piedras/