Go West to Watch for Whales 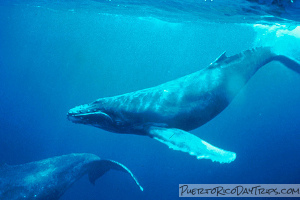 The oceans and seas around Puerto Rico are full of amazing creatures, even whales. And every winter, humpback whales join us for a 2-3 month period to rest, mate, and care for their young before heading back up north.

You will have the best chance of spotting humpback whales from mid-January though mid-March in the west coast regions (Porta del Sol) and northwest coastline, though whales have been seen all around the island, on occasion, all year round.. You might even get lucky and catch a glimpse of sperm whales or orcas off the north coast or south coast from January through August, but since they usually prefer the deep waters far from shore, it is less likely.

Humpback whales (ballenas corcovadas in Spanish) are magnificent creatures and, unfortunately, are on the endangeed species list. They can grow to a length of 50 feet and weigh up to 50 tons.

From December to the middle of April, many north Atlantic humpback whales migrate to the warm waters around the north of the Dominican Republic. During their migration, they sometimes stray into the Mona Passage, either as a side-trip on their journey, or to stay for a while. They mate and calve in our tropical waters during the winter, and then travel back up to the cold water of the north Atlantic to feed during the summer.

Luckily for us in Puerto Rico, the ones that enjoy the Mona Channel give us the opportunity view them. So anywhere from Cabo Rojo up to Aguadilla (or even as far east as Arecibo) are prime locations to try and spot some whale action.

As SCUBA divers, we really enjoy seeing all ocean creatures, big and small. We have traveled to Hawaii specifically for whale watching a number of times. It was amazing. There were so many whales, that you couldn’t NOT see them. But that’s not how it is here in Puerto Rico. 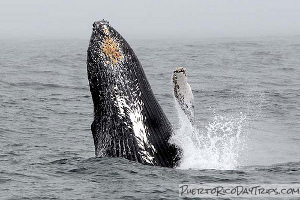 If you plan on doing some whale watching in Puerto Rico, we’re here to help set your expectations correctly. There are whales, but not many. You will most likely NOT see them.

We have been in Rincon and the southwest and northwest areas a number of times during the February/March time frame and have never seen any whales.(Update- 4/16- we finally saw a pod of the coast of Arecibo, which having lunch at a waterfront restaurant. Very exciting!). I guess "elusive" is a good word for these sea creatures. To be sure, there are sightings, just not every day.

They say that the best times to spot them are early morning or just before sunset, though they are around 24 hours/day. You may be able to see them from the beach, but to really get an idea of how amazing and large they are, I really recommend a boat trip.

During the season (mid-January to mid-March) a few companies with boats will have sunset cruises during which they also look for whales. 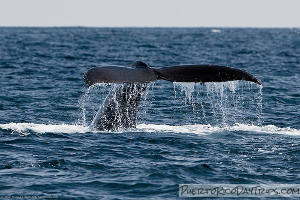 To spot them, look for a spray of water straight up into the air (when the whales rise to the surface to breathe). They come up for air every 15-20 minutes (usually more often with the babies).

Sometimes they do all sorts of fun things while on the surface like tail slaps, breaching up out of the water and spyhopping. If you are close enough (or have binoculars), when they dive back down after breathing, you can get one last look at their tail. It is an amazing sight!

a bad day of whale watching is better than a good day at work!

Sitting on a beach and looking at the ocean with a drink in your hand is a wonderfully relaxing way to spend your time, whether you see whales or not. We recently spent a number of hours in Rincon doing just that, and we got some great sunset pictures. 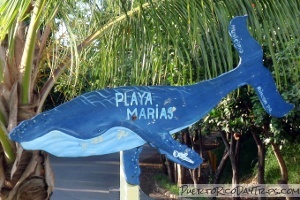 We also spent a few hours up at the Rincon Lighthouse one morning. The waves were high, so we did more surfer watching than whale watching. It still wasn’t a bad way to spend a weekday morning!

So set your whale sighting expectations low, and be overjoyed if you get lucky enough to see one. And then just relax, watch the water, and enjoy the beauty of it all.

Katarina Sail Charters in Rincon offers a 2-hour sunset cruise, where you might see whales in whale watching in-season.

You can also ask local fishing captains, dive companies, or local boat captains if they can arrange whale watching trips.