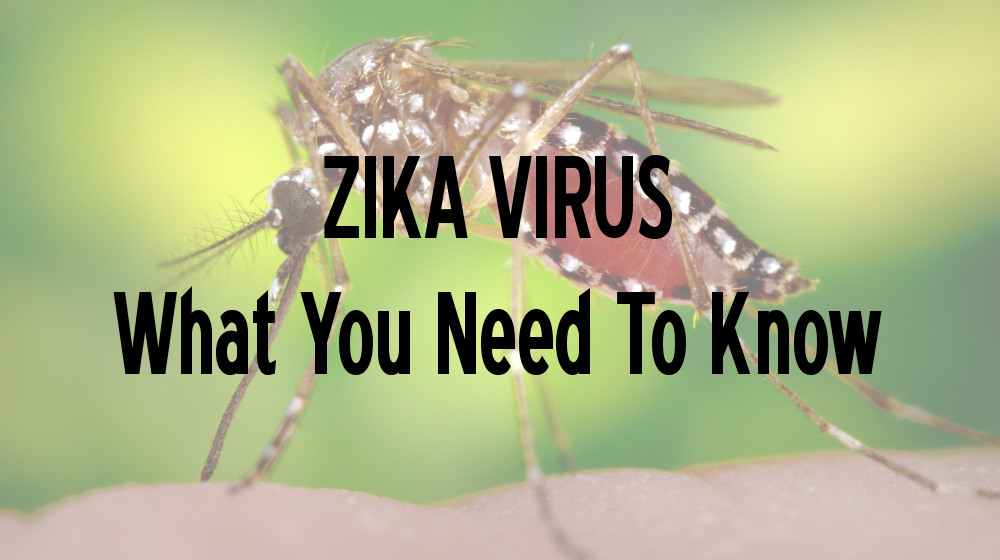 Zika – What You Need To Know

In 2016, the news media had a field day reporting on the spread of Zika across the Caribbean and Puerto Rico. If you listen to the news reports about Zika, you’d think that Puerto Rico was ground zero for the zombie apocalypse.

If you have plans to travel to Puerto Rico or other tropical places, do a little research and understand the facts. People here on the island are still alive and well, with only a few cases suspected monthly and we need tourists more than ever!

If you don’t feel like reading this whole article, just read and understand this part … You should be aware that there is a risk (a very small risk) of getting Zika while on vacation in Puerto Rico and many tropical places. You can reduce that risk even further by applying mosquito repellent with DEET both while indoors and outdoors, wearing long sleeve shirts and long pants, and by keeping doors/windows closed and using air-conditioning.

According to the CDC, the only people that really need to consider canceling their travel plans are pregnant women and those trying to conceive. The CDC guidelines indicate that women in any trimester should avoid travel to destinations with active local Zika virus transmission. The Zika virus can live in semen for months following infection, so men should use a condom during sex if they have been exposed to the Zika virus.

Zika Virus Disease (or simply Zika) is a disease caused by the Zika virus (or ZIKV), which is primarily transmitted to humans through the bites of infected mosquitoes. Zika virus was first discovered in 1947 in Uganda. In May 2015, the first confirmed Zika cases were reported in Brazil, and it has since spread throughout the Caribbean — including Puerto Rico. Currently, there have been cases of Zika reported across the Caribbean, throughout the Americas and in most of the US States. 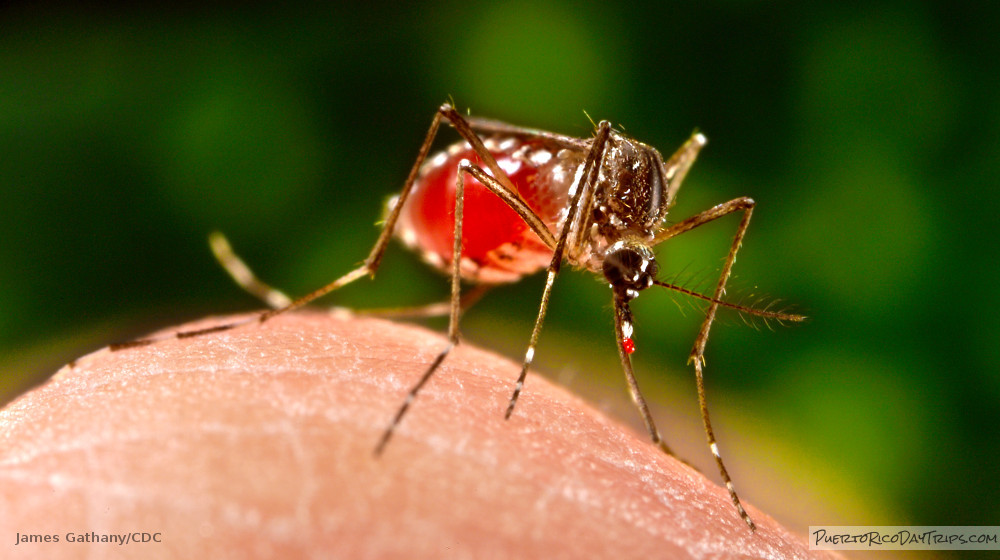 How is Zika Virus Spread?

Here in Puerto Rico, Aedes aegypti is the principal mosquito carrier of Zika virus. This species of mosquito is closely associated with humans and their dwellings. They like to live and breed in a place that is close to their food source — humans — and generally in urban areas, where there are more people available for them to bite! Aedes aegypti prefers to rest in darker cool areas, such as under furniture and in closets — convenient for them to bite people indoors and/or around the household and yard.

What makes Zika more scary than other mosquito-borne disease is that Zika can be passed from a pregnant mother to her fetus, which in turn may cause the baby to have microcephaly or other severe fetal brain defects. Zika can also be spread sexually from an infected male to his sex partners. 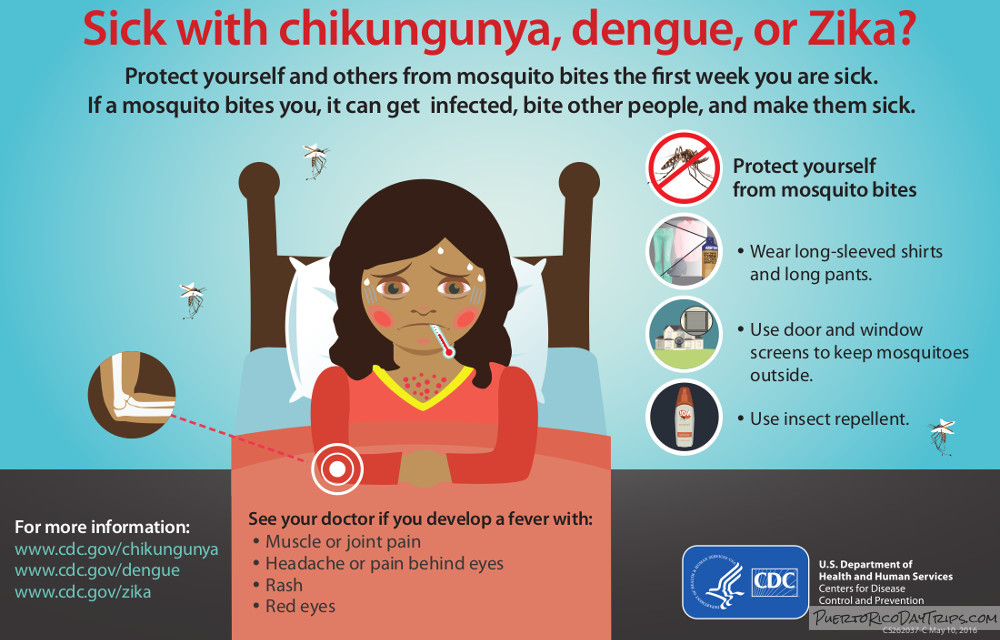 What are the Symptoms of Zika?

Only 25% of people infected with the Zika virus will exhibit symptoms, so most people with Zika won’t even know they have it. Zika is characterized by fever, rash, joint pain, or conjunctivitis (red eyes). Other common symptoms include muscle pain and headache. Symptoms typically appear 2 to 12 days after being bitten by an infected mosquito. Symptoms are typically mild and last about a week. People usually don’t get sick enough to go to the hospital, and they very rarely die of Zika.

The symptoms of Zika are similar to the symptoms of Chikungunya and Dengue (both which we also have here in Puerto Rico), so it is possible to mis-diagnose the disease.

What is the Treatment for Zika?

See your doctor if you suspect that you have Zika, and tell your doctor that you recently visited the Caribbean.

There is no specific medication for treatment of a Zika infection. People who think they have Zika should use acetaminophen or paracetamol, to relieve fever and pain. They should also rest, drink plenty of fluids, and consult a physician. Aspirin and other non-steroidal anti-inflammatory drugs (NSAIDS) should be avoided until dengue can be ruled out. 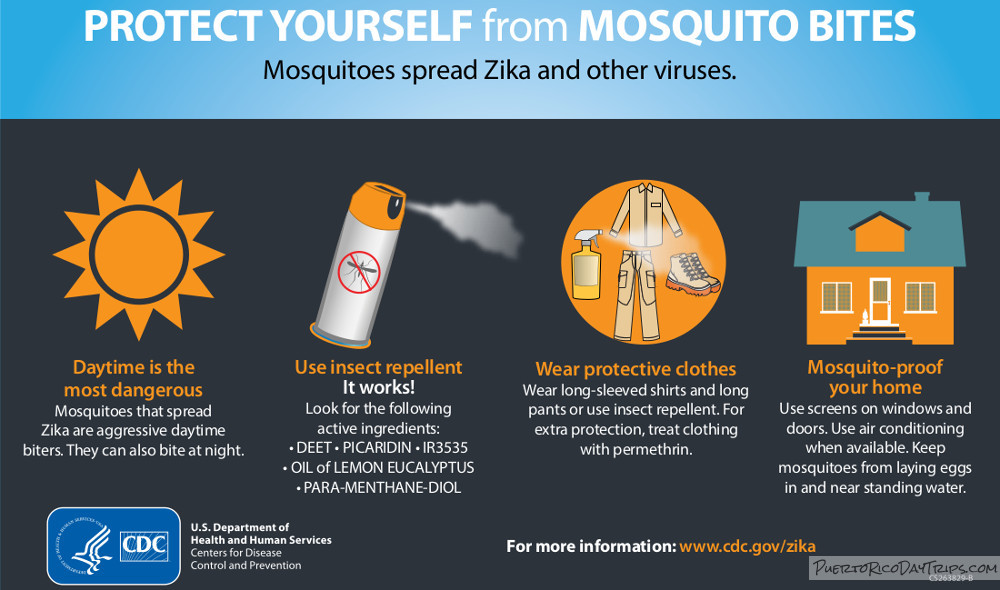 How to Prevent Zika

There is no vaccination to protect you from Zika. So the way to prevent the virus is to prevent getting bitten by an infected mosquito in the first place.

The adult mosquitoes feed (bite) inside a dwelling as well as outside near their “homes”, during the day and at night when the lights are on. To protect yourself, use mosquito repellent on your skin while indoors or out. When possible, wear long sleeves and pants for additional protection. Also, make sure window and door screens are secure and without holes. If available, use air-conditioning.

Use mosquito spray (Raid Flying Insect, or something similar) in your home and your hotel room. Even though we don’t live in a high Zika area, we still spray dark corners and under the furniture a couple times a day, just as a precaution.

How Widespread is Zika in Puerto Rico?

Contrary to what the news media would have you believe, Zika is not the black plague here on the island. At it’s peak in 2016, there were about 2000 cases a week. Now (2018), it is not even something anyone here thinks about. The Health Department has stopped testing suspected cases of the viruses, so there have been no confirmed cases in a while.

You are not likely to catch Zika , but remember, no matter where you go or what you do, you should take precautions to reduce your chances of getting bitten by a mosquito. I feel it is better to be safe than sorry.

Mosquito photos by James Gathany, Scientific Photographer with US Centers for Disease Control and Prevention (CDC). From the CDC Public Health Image Library.