Printed on 15 Aug 2022 from
PuertoRicoDayTrips.com 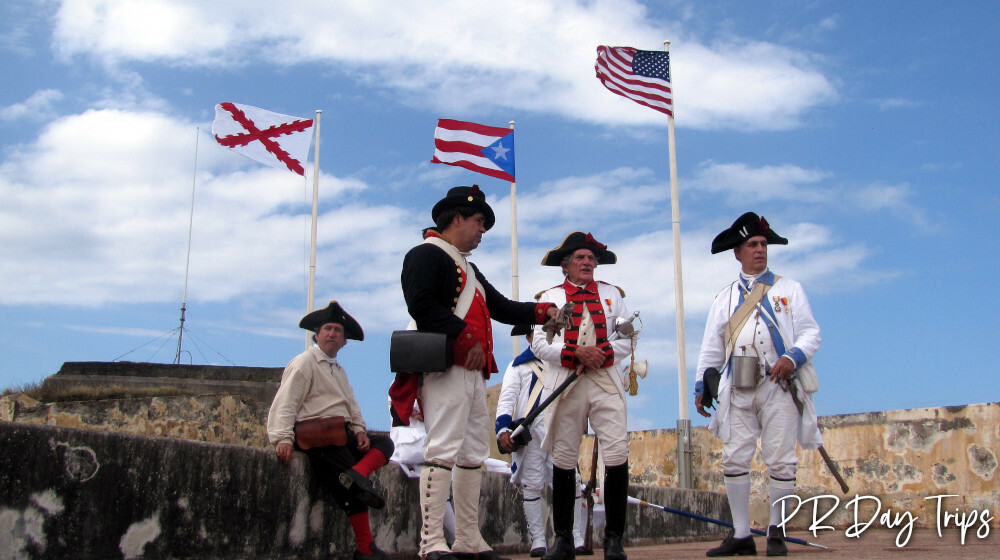 Witness History at the Battle of 1797 Reenactment 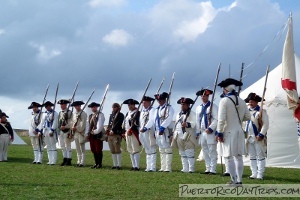 Did you hear? The British are attacking Old San Juan! Well … OK … not really.

But the British Navy, under orders given by the Sir Ralph Abercrombie, really did attack the Port of San Juan back in 1797. And, to commemorate that event, a reenactment is held each year in Old San Juan, usually on the last weekend of April.

We have attended this event for the past couple of years, and it was really neat! Even if you have been to Old San Juan and El Morro or Fort San Cristobal before, a visit during the reenactment weekend is really worth it. The men (and women) in uniforms and clothing of the period, following the customs of the period, walking around the area, firing their weapons, and marching in formation really bring the forts alive. You can get great photos, but really, the best part of this reenactment is talking to the people involved in the reenactment.

Since Puerto Rico was situated in a prime location between the riches of the New World and the home ports of the Old World, many countries wanted the island for their own.

The British made three attempts to take Puerto Rico. The final attempt was in April of 1797. The attack was led by Sir Ralph Abercrombie for the land forces, along with Admiral Henry Harvey for the naval forces. Together, they led a formidable military contingent of more than 4000 (or up to 12,000 depending on which reference you use) British forces. 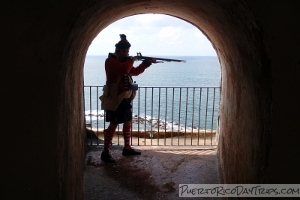 A little bit of trivia I got from talking to the soldiers at the reenactment is that the British forces consisted of British solders, and people of other nationalities who were under the British empire at the time — such as the Royal Highlanders of the 42nd Regiment (who were Scottish) and some German mercenaries.

Their attacks were met by the much smaller Spanish/Puerto Rican contingency, made up of Spanish soldiers, members of the Puerto Rican Fixed Regiment, some free black militia and other citizens, all under the direction of Governor Ramón de Castro. Another piece of trivia I picked up was that there were also French soldiers fighting on the side of Spain.

With the protection of the massive walls and fire power at El Morro, the British ships were stuck — they couldn’t get close enough to do any damage or seize the forts, nor were they able to send supplies to their ground troops. Also, due to the strategic locations of Fort San Geronomo and Fort San Antonio, the attacking grounds troops were unable to get the better of the small but tenacious Puerto Rican militia. In the end, the British retreated after only 14 days of battle.

Every year, in April, the 1797 British Attack on San Juan is commemorated with military drills, firing demonstrations and educational programs. Many local, Puerto Rican living-history volunteers (reenactors) from the Fixed Regiment of Puerto Rico, and others from all over the US, Canada and Spain, come to help bring the past alive.

There are a variety of activities scheduled during the multi-day event, including canon or musket firings, military drills, and sometimes an encampment set up on the lawn outside of El Morro. And, of course, there are plenty of reenactors wandering around that you can talk to and pose with for photos. 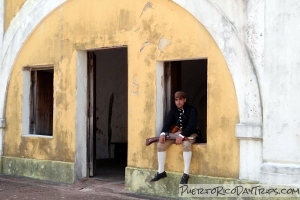 The Fixed Regiment of Puerto Rico is a regiment of living history volunteers are impressive (you will occasionally see them participating in other activities at the forts). They will be dressed in white linen uniforms made to 18th century Spanish military code.

The volunteers of other nationalities are also dressed in the uniforms of their respective regiments/contingents from that time period. There are even women with them and other living history volunteers, dressed in period clothing as nurses, wives or just regular citizens. We even met a nice Spanish pirate (or "privateer" as he prefered to be called!).

We spent much of the afternoon speaking with a number of the "soldiers" or militia reenactors, and learned a lot of history about the attack on San Juan, their regiments, their real lives, and past living-history reenactments. These volunteers are really into it, and they love to have their pictures taken in uniform. It’s the volunteers that really made this a great event. I strongly recommend that, if you are in Puerto Rico during this time, you come into Old San Juan and see it for yourself.

Now, I do have to mention that the day was a bit unorganized. There is a listed schedule of events for each day. But, instead of a rigid schedule, you need to think of it as a list of activities that may or may not occur at some time throughout the weekend. You really just need to hang around and wait and see. Even with the wait, I still enjoyed myself very much. Since we had some free time waiting between the events, we used the time to learn something, meet a bunch of nice people, and we take some nice photos/videos.

This is a call for participation to all you living history volunteers out there. You know who you are. It’s you folks that make events like these so enjoyable!

We went to the reenactment on a Friday and there were maybe 35 re-enactors. The British troops were sorely under-represented! On Saturday, there were more people on all sides — but the more the merrier! 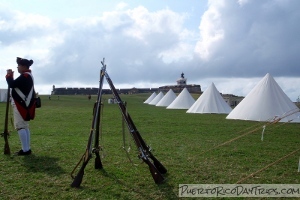 We spoke with a number of the volunteers, and here are some of their comments:

Living History Volunteers – If you want to participate in this event as a re-enactor, you must register with the Regimiento Fijo de Puerto Rico, Inc. The registration information and forms can be found by clicking on the 1797 Event link of the Regimento Fijo de PR web site.