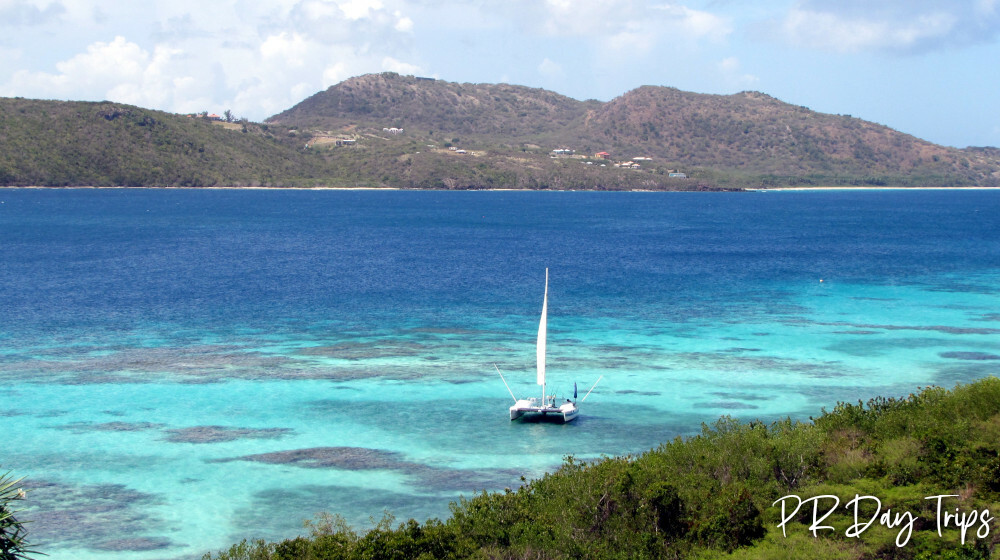 Sail the Day Away on the Pez Vela in Culebra 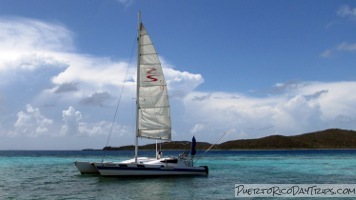 Culebra is a small island off the east coast of Puerto Rico, that offers some great water-based activities — beautiful beaches, great snorkeling & SCUBA diving, and awesome fishing. There are some even smaller, less-visited islands surrounding Culebra that are just begging to be explored. But, to get to those, you need a boat.

Captain Bill Penfield offers charters to all areas around the waters of Cuelbra on his Pez Vela sailboat. It is a great way to spend a day (or more)!

The Pez Vela (which means Sailfish, in English) is a 33-foot catamaran sailboat that holds a maximum of 6 guests. This means there is plenty of room to spread out onboard while Captain Bill sails you around to all the best sites. 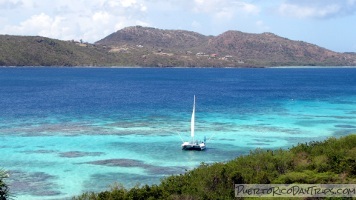 Usually, it is an all-day trip (from 10am until about 5pm) with snacks, lunch and drinks included. However, we went out with him on a special low-season trial excursion, which was supposed to be just a half-day tour. But Captain Bill is very generous with his time (and I think he just likes sailing and helping people enjoy their day), and we spent almost a full day out on the water.

Our trip was a BYOL (bring your own lunch), so we didn’t get to taste his much praised fresh-cooked lunch, but we still got a taste of the islands and offerings around the northeast of Culebra — the beautiful blue water, white sand coves, deserted beaches, hiking on Culebrita and snorkeling.

Our Trip — Not the Usual

After a few phone conversations with Captain Bill, our sail day finally arrived. My main objective was to get to the lighthouse on Culebrita, and he promised we would be able to do that, so I was happy before we even got started. 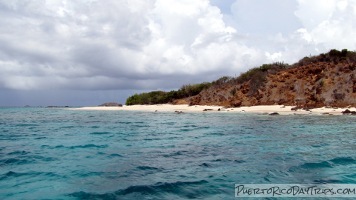 He docks his boat in Fulladoza Bay, right across the street from Club Seaborne (and just down the street from Bahia Marina, where we were staying). So, after a quick drive down to the dock, we said our hellos and boarded the boat. His dog Gigi was there, and she was so sweet and a great "salty dog" — she could walk around the deck even while sailing rough seas!

Our group that day was 6 people — 4 in our party and 2 in another party. The boat is large enough that we had room to spread out, but intimate enough that we could all talk.

A storm was threatening on the day we went out, so while it looked clear in the morning, Captain Bill was concerned our day would deteriorate and the wind and waves would pick up. He warned us of the possibility of bad weather, and we all decided we would take our chances with the weather and hope for the best. 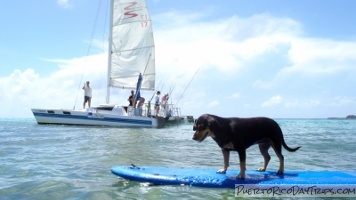 While we worked our way out of Ensenada Honda and up and around the eastern part of the island, Captain Bill talked about Culebra, what it is like living there, things to do on the island, what beaches and houses we were passing, and answered any questions we threw at him. He is a really pleasant guy.

As we made our way around the east end of Culebra, the island of Culebrita came into view. We headed over to Culebrita, and we moored the boat on the south side of the island. We all got off the boat and made our way to Bohou Beach. Even Gigi … she rides the surf board in to the beach.

Since the boat can’t anchor on the beach, you need to either swim to shore, or use the surfboard. Captain Bill dry bags you can use so your cameras and other items won’t get wet while you’re making your way to the beach. The boat has a ladder to climb up out of the water. 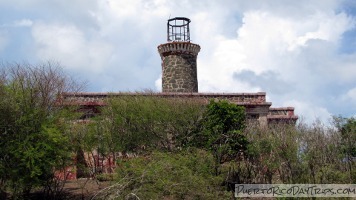 As I said earlier, our plan was to hike to the lighthouse, so Captain Bill directed us to the trailhead for the path that would lead us there. He also told us where the best snorkeling was from this beach.

Everyone on the boat opted to first hike to the lighthouse. We all set off on a 15-minuted hike that afforded some amazing views. We spent a long while up at the lighthouse, and we got some beautiful photos. The other couple went back to the boat a little early to get in some snorkeling.

Once we were all finished with hiking and snorkeling, we got back onto the boat, and Captain Bill pointed out the approaching storm. We all decided to weather the storm on the water, and then to hopefully have a chance to do some snorkeling over at Cayo Norte. So we sailed around Culebrita a little (just so we could see some of the pretty beaches) and then over toward Cayo Norte.

The storm came upon us pretty quickly, so we all helped Captain Bill drop the sail quickly, we donned the raincoats he had in the hull, and we rode out the storm. It only lasted about 10 minutes, with cold rain and gusty wind. Then, as quickly as it started, the storm was over and it cleared up. 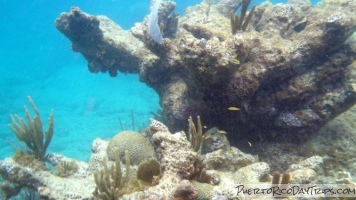 After the storm, we were able to go snorkeling off the south side of Cayo Norte, which was really nice. The water was still pretty clear and not too rough. We saw all sorts of fish, squid, and even had a pair of remora that accompanied us the whole time.

As fate would have it, the engine on the boat got stuck in reverse. But Captain Bill just called for a tow, and we quickly got back to dock.

Even though it was not a perfect trip, we had a little adventure, a lot of fun, took some great photos, and we had a nice long day on the water — much more than we paid for! We all enjoyed it a lot. 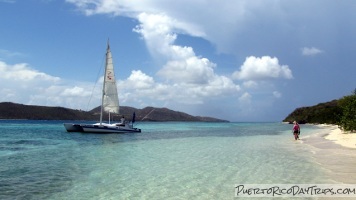 Captain Bill knew we were going to writing about this trip, and he wanted us to point out that this was not a typical tour! Weather issues and engine troubles can happen anywhere to anybody. To me, as long as they are handled calmly and safely (as they were), that is all you can ask for. This half day trial trip was a trial run, and it will not be offered in the future.

The usual full-day trip can be customized to your likes/desires — whether it is fishing, snorkeling, swimming with the turtles, or a combination of all of these. They usually make a stop at Tortuga Beach on Culebrita to swim with turtles and play in the "baths". During the usual trip, they also drag fishing lines behind the boat while en route, so usually there is fresh fish for lunch (though Captain Bill can customize lunch to your preferences). He also offers deep sea fishing trips, and private charters.

Captain Bill’s prices vary depending on each trip, but the usual all-day sail starts at about $125 per person, lunch, drinks, snacks and snorkel equipment included. Private charters, family rates, deep sea fishing charters, and other options can be worked out.

FYI, there is a head on the boat if you need it.

If Captain Bill is already booked, you can try Captian Dan Classic Sails Day Tours. They offer a single-hulled sailboat and are available in "winter months" out of the Culebra Town Dock. You can contact them at 510-552-8295, or check their web site for more information.