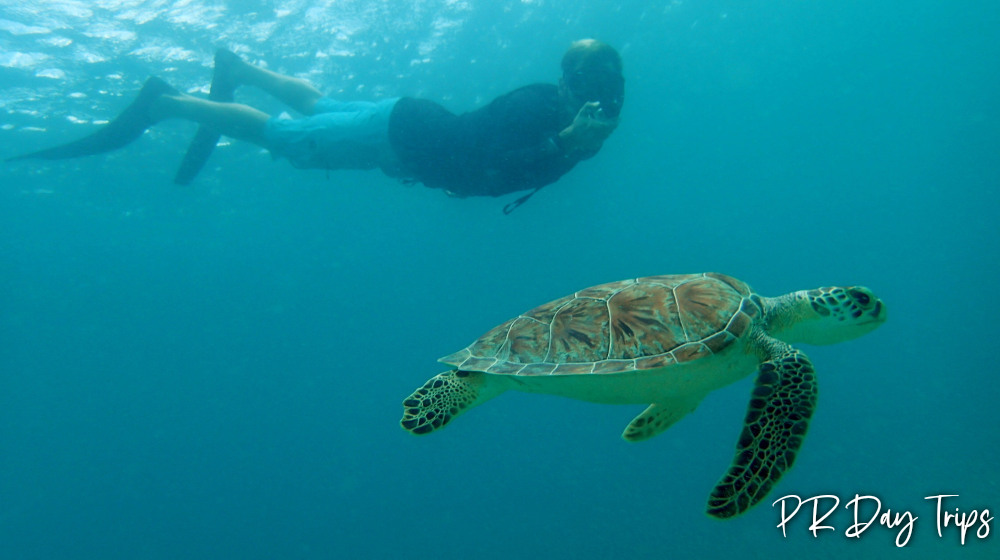 Posted by Gwenn • Updated on 18 Feb 2021
Category: Culebra, Nature, Snorkeling, Water Sports
Print This Without Photos
+ Print This With Photos 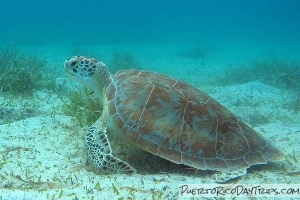 If you like to snorkel, then the island of Culebra is calling your name.

Hardly developed, this tiny island has miles of shoreline, and lots of healthy sea life and coral formations. Which makes for what is arguably some of the best snorkeling available in Puerto Rico. To make things even better, most of the great snorkel spots are easy to get to right from the beach. So grab a mask, snorkel and fins, and jump in!

Culebra is located just 17 miles to the east of the "big island" of Puerto Rico, but it is million miles away from the big island in feel and vibe. Culebra has been spared all the urban sprawl and development that most of Puerto Rico has experienced. This, coupled with being a coral island (meaning no muddy run-off from rivers to muck-up the water), very few inhabitants, and large tracts of wildlife refuges, enable the reefs around the island to thrive. Visibility depends on the sea and weather conditions, but there is usually great underwater viewing. 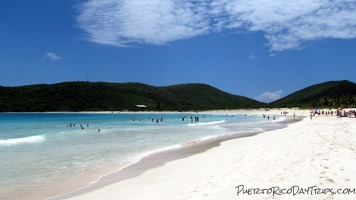 The beaches and coves facing west (the leeward side) have the best snorkeling because land masses block most of the waves that come from the north/norteast. These beaches are not known for their sand, and as you move southward, they are actually kind of rocky. But don’t worry, you can find some nice sandy spots to sit on the beach.

Underwater, expect to see stingrays in the sandy areas, turtles (especially eating the grasses), and loads of fish and corals of all types. Sometimes, I felt like I was snorkeling in an aquarium.

We did notice a number of types of sea urchins and fire coral. So watch where you step in the water and don’t touch anything while snorkeling!

Flamenco Beach is famous for its wide, white-sand beach, and beautiful Caribbean-blue water. But it also has a lot of good snorkeling, just a short swim from the beach. Most people just head in on the main path from the parking lot, and head to the reef a little bit to the left. That’s where you will see a number of people snorkeling. It is OK, but the area has been well-used, and it’s not as healthy as it once was. 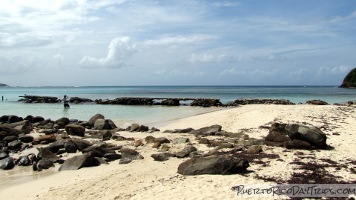 There is a healthier reef system farther to the left, and straight out from the tank on the beach.

The best snorkeling is to the far right on Flamenco Beach, where the sand ends and the rocks begin (that would be the east end of the beach). This area is called "Shark Cages" (or "Muellecito", by the locals).

Since the reef comes all the way up to the beach in this area, you need to enter & exit the water between the 2 rows of concrete/rocks. Once you get into the water, snorkel around the concrete pilings and to the right. 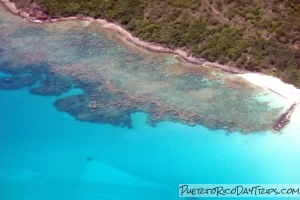 This amazing reef is covered with lots of types of corals and sea life. As you follow the reef to the northeast, the water is a bit deep, and you have to watch the current as you get closer to the point.

Since you have to exit the water at the same spot you entered, turn around before you get tired. You will most likely be swimming against the current heading back to the beach, and you want to make sure you get back on dry land safely.

Luis Peña Channel Natural Reserve is the first designated no-take, marine reserve in Puerto Rico. It is (roughly) a rectangular area formed by Carlos Rosario Beach and Melones Beach on Culebra, and the southeastern and northwestern tips of Cayo Luis Peña. This whole area is very healthy, and full of all sorts of sea life. The next four beaches in this list are part of the marine reserve area (Carlos Rosario, Tamarindo Grande, Tamarindo beach and Melones). At each of the beaches in the marine reserve, there is a big sign that indicates the water entry point(s) and locations of the reefs. 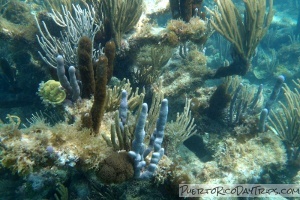 Melones Beach is part of the Luis Peña Channel Natural Reserve. It’s really easy to get to; you just drive right up to it and park just steps from the beach. You enter and exit the water just behind the "Melones Beach" sign and picnic table. Swim to the right, to where the rocks jut out of the water. The underwater rock formations and reef here are amazing. Everything was covered with many fans and soft corals, along with all types of hard corals. The depth here is probably 10-15 feet.

Carlos Rosario Beach and Tamarindo Grande Beach are both part of the Luis Peña Channel Natural Reserve. In order to get to these beaches, you need to hike on the trail from the parking lot at Flamenco Beach.

At the end of the trail, you’ll come out on the beach at Tamarindo Grande (or sometimes called Tamarindo II). There is a very nice reef here (to the left). 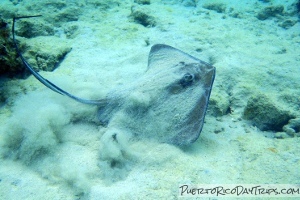 If you continue to walk the trail to the right (toward the northwest), you’ll come to Carlos Rosario Beach, which is considered by many to be the best snorkeling spot in Culebra. The best snorkel spots at Carlos Rosario are in around 15-25 feet of water. In these areas, you’ll encounter the largest diversity of corals and fishes around the island.

Tamarindo Beach, also part of the Luis Peña Channel Natural Reserve, is nice because you can drive right to it, and it has some amazing sea life. There is a small reef close to the far left area, and the University of Puerto Rico is even "planting" coral to help refurbish the reef. The reef here is so-so. 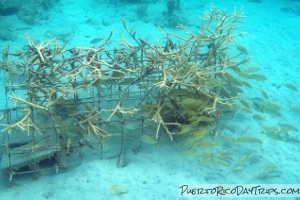 For me, the main draw at Tamarindo are the sea turtles and stingrays. The turtles love the sea grass in the area — we saw 5 turtles at the same time. The stingrays like the sandy bottem out by the sea grass, too.

If you continue down the road from Tamarindo Beach, the area in front of Tamarindo Estates, which I hear has a nice reef, but I don’t know if they have open access to non-guests. The problem in this area is that this beach is mainly rocks, so you need to wear shoes and do some rock-walking to get to the better snorkeling spots. 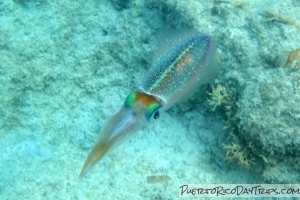 Punta Soldado is a bit of a drive, and then a hot hike (unless you want to risk your rental vehicle on this horrible path) to the beach. Once we got to the beach, we walked to the left until the large rock on the beach, and snorkeled to the left and then back a bit. Decent snorkeling, but not the best. Not as many fans as other places. Mainly lots of underwater "rocks" with stuff on/around them. But I hear there is also snorkeling to the right. Will have to check that out next time! 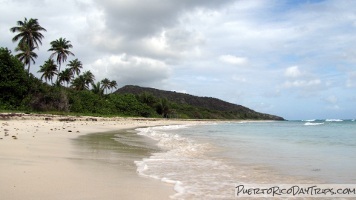 Zoni Beach is located on the northeastern shore of Culebra. I have heard that Zoni Beach has a reef with OK snorkeling on the far right by the rocks, but you really need to watch the weather, waves, currents, and rip-tides, as this is the windward side of the island.

The day that we were there, the water was too rough for us to risk going in to check it out. So we decided to take our own advice and kept our feet firmly planted on dry land. 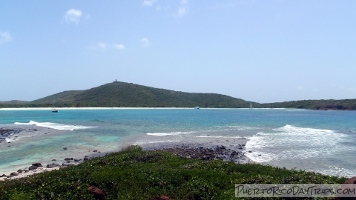 There are other great beach snorkeling spots around Culebra that you need boat transportation for, either because you can’t drive there, or because those beaches are on some of the small cays surrounding Culebra. There are a number of water taxi services, or day trips available, that you can take to the islands some of the surrounding cays, including Culebrita, Cayo Luis Peña, and Cayo Norte.

Some Tips and Ideas

First and foremost, getting there: Culebra is another island, so going across the water is needed- either in a plane or by boat. We wrote a few articles about it to help- ferry out of Ceiba or flying from Ceiba airport .You can also fly out of Isla Grande airport or take a boat tour out of Fajardo marinas.

You have to be aware that none of the beaches we mentioned, with the exception of Flamenco Beach, have lifeguards. That means that you’ll be responsible for yourself while snorkeling, and you should be prepared for self-rescue should the need arise. At a minimum, every member of your snorkeling party should have a snorkel vest or some type of personal flotation device.

The sun is really strong here. Even on overcast days, there is enough UV reflected from the sand or through the water to give you a really bad sunburn in very little time. Apply sunscreen liberally and often. Wear a rash guard or long sleeve shirt while snorkeling. Women should wear shorts (not just a bikini bottom) while snorkeling. There’s nothing worse than trying to sit on a sunburned butt! 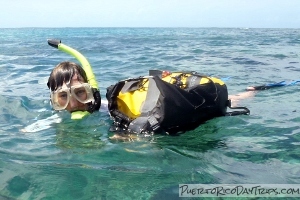 Consider what to do with your "personal stuff" (wallet, car keys, cell phone, camera, etc) while you are snorkeling. Many of these beaches are remote, and if you leave your stuff unattended on the beach while you go into the water there’s the chance that it won’t be there when you come back to the beach.

We use a large dry-bag (like you would use for kayaking) that we put all our stuff in. Once we seal the bag with a good amount of air in it, it will float. Then we can just tow it around behind us while we snorkel (and I guess if we ever needed a rescue float, it would help). And, because we’re paranoid, we use 2 dry bags — one inside the other. That way, if one bag leaks, there’s a good chance that our stuff will still stay dry (which turned out to be a really good idea on a recent trip).Our outer bag is bright yellow, which also helps boats identify that there is something in the water to watch out for.