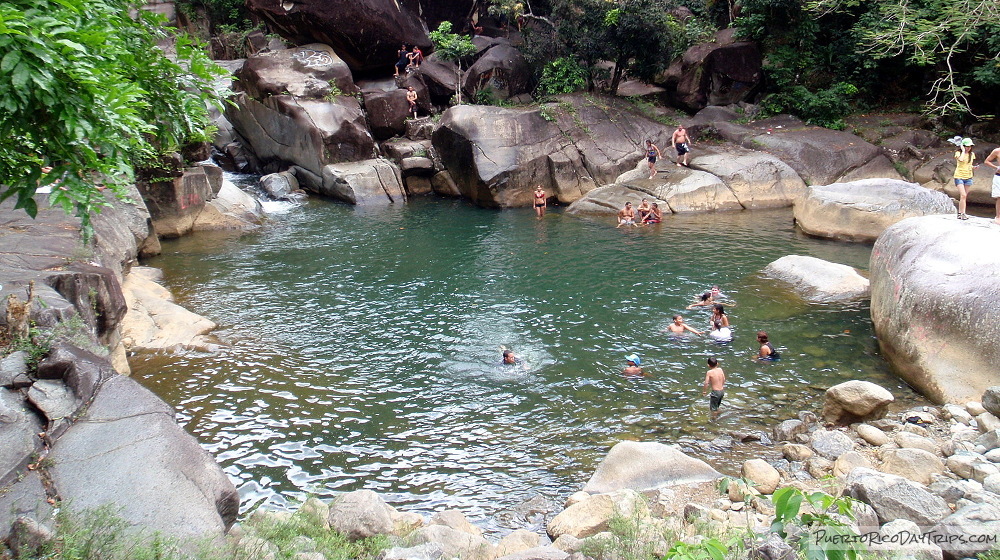 Posted by Gwenn • Updated on 28 Feb 2022
Category: History, Nature, Porta Antillas (East)
Print This Without Photos
+ Print This With Photos

It looks like they are closing the usual parking area right along th road by the access point. The road can not be blocked by parked cars. You will need to find parking much lower and then walk up. 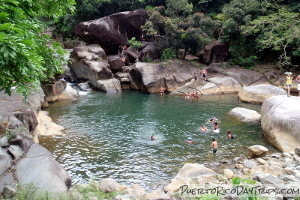 We live on the north side of El Yunque National Forest, and I am pretty familiar with most of the trails and things to see in the rain forest in our area. But I have been on a quest to get to see the petroglyphs located in Rio Blanco on the south side of El Yunque for a long time. We were finally able to find them, along with swimming holes and a water fall. This is one of those trips that you could do on your own, but it would be much easier with a guide.

The petroglyphs are located in an area known as El Hippie. This area is pretty well-known by the locals and kids in the area. It is one of those places where they go to hang out, play around and do some crazy stuff. We went on a holiday morning, and we found a really nice bunch of local teenagers hanging out, enjoying the day off from school. Since we didn’t know exactly what was what, I asked them to show us around and they were more than happy to help us explore the area. 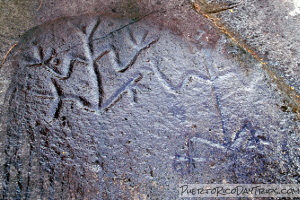 First off, they were a lot younger, more fit and much more agile than me and Ray. They were able to quickly scale these REALLY large, slippery boulders. But at least one of them always waited for us to make our way and lend a helping hand. Second, they wanted to show us everything — all the cool stuff — even a cave you can go into that goes under and through a waterfall. We were OK with most of it, but the cave turned out to be a bit more than Ray and I expected and bargained for — but we made it through!

Though we really enjoyed ourselves that morning, this is not something that I suggest that others do on their own. There are guides you can pay to take you to EL Hippie — I suggest you do that.

When we were driving up to El Hippie, we passed a gate on the right side of the road that had a sign that said Parking $5. Parking there would have been ideal since the petroglyphs are located just across the river from that property. And for safety-wise of the car, but as our luck would have it, there was no one home — so we couldn’t park there and access the river that way. We had to continue up the road to El Hippie. 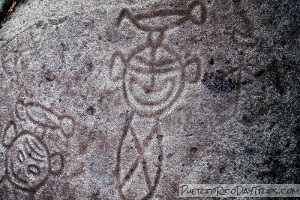 The petroglyphs are located downstream from the El Hippie pool. The local kids led us downstream, by scaling huge boulders, on the far side of the river. Getting there wasn’t too easy, but we made it in one piece. This is one of those times that it would have been really good to have a guide.

When we got to the petroglyphs, we found one large, smooth rock that had 5 or 6 pre-Columbian Indian carvings on it. Unfortunately, these petroglyphs are a bit worn from all of the people that have visited here and walked on the rock over the years. We found that if you wet the rock, you can see the petroglyphs better.

A little farther downstream there is a second, taller rock that has some more carvings on it. They are carved on the top side of the rock in an area where you can’t stand — so these petroglyphs are in better condition. Unfortunately, that also made it difficult to get photos of all of them.

Overall, these petroglyphs are pretty impressive — though getting to them would have been easier with a guide. I know that Robin Phillips takes people to see these petroglyphs. He might know an easier way to get to them. If you really want to see them, it is probably worth investing in the trip with him.

After we saw the petroglyphs, we headed back upstream to the El Hippie pool area. On the way up, the kids stopped to show us a small (and I mean small) cave that goes under and through the river rocks, under a waterfall and crosses the water. As I said earlier — skip it! The kids showed us a "safe" way to go through it — but, in reality, there’s really no "safe" way!

After our little cave adventure, we scrambled back up to El Hippie pool, where the kids stopped to eat their picnic lunch. While they were doing that, we watch some other locals kids jumping off the rocks into the pool and using the natural rock slides.

The pool was deep in the middle, but it had a shallow, rocky bottom on the edges. I was just happy to sit on the rocks and watch.

Unfortunately, this area is really dirty with trash, leftovers from picnics, and other garbage. I was really disappointed in the conditions we found there. It even smelled of trash. So we were happy when the kids finished their lunch and came back to lead us up to La Canoa Falls. 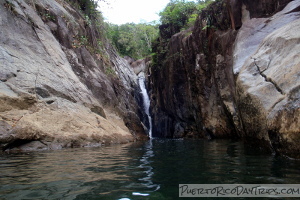 La Canoa Falls is just up above the HUGE rock that up see on the upper right of the El Hippie pool. The climb was tricky — it’s up and around the rocks on the right side of El Hippie. La Canoa Falls is in a narrow shaft between the sides of the rock walls above El Hippie.

It is a nice waterfall — probably 70-feet high — that has cut a gorge through the rock over the years.

The kids took us up to the top of the falls, and I stayed pretty far from the edge! Then, all of a sudden, one of the boys just jumped over the edge and disappeared into the pool below! Crazy! 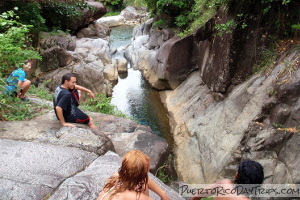 The kids that jumped seemed to have some method to their madness. Though they were jumping from a height of around 70-feet, they were entering the water as if doing a shallow dive. It appears that there is only a small spot were the water is deep enough to jump from that height.

While you’re in this area, you might consider visiting Los Prieto Falls or Rio Sabana Trail.

Be aware, these are slippery rocks, so you need to be careful when walking around on them. Also, never go in the rivers during a rain (flash floods happen a lot ) or even a day or two after a rain, since the current can be too strong to be safe. People have been hurt/killed while playing in this river, jumping from the rocks and climbing around the rivers. Respect nature and be safe. And don’t litter. 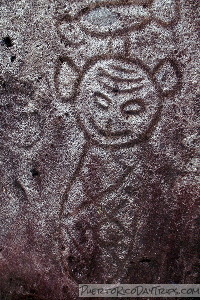 Driving directions from the Fajardo area: Route 53 to Route 31 west (exit #22 for Rio Blanco). Follow Route 31 to Route 191. At KM28 on Route 191, you will come to a large concrete bridge. Cross the bridge and then make the first right on the road there (there was signs for Casa Picaflores and Monatana Explorer, but we don’t know if that will always be there). The road is really narrow — go slowly and honk the horn around the corners. Take this road a bit, when you cross a small bridge, turn to the right (Montana Explorer and Casa Picaflores had their signs on this corner too) and take this road up until the end, where you will need to find parking- either in a lot (if available) or roadside without blocking the route. To get to the El Hippie pool, you will need to go down to the river on a slippery path at the end of the road.

Be aware, there have been car break-ins in this area, so take everything you value out of the car. It would be best to park in a lot if any of the neighbors allow it.