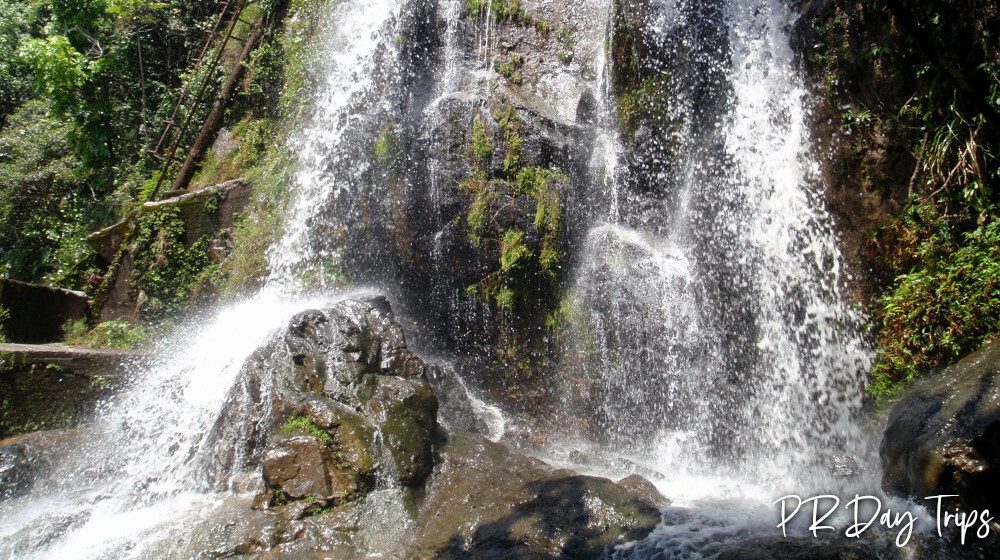 Technically, Hiking is not allowed on this trail. After Maria- the trail had a lot of damage, it is now really difficult, with wash outs and is super slippery. Not recommended unless you are really prepared and in great shape! 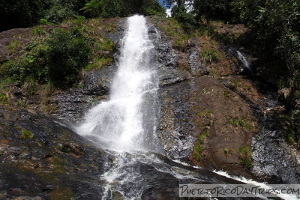 The El Yunque National Forest covers 28000 acres, and much of it is protected as wilderness areas. Ray and I are always looking for new trails to hike and, of course, elusive waterfalls. We recently went to the south side of the rain forest in search of Los Prieto Falls. We found a great hike and beautiful set of waterfalls, too!

We originally did this hike years ago with Robin Phillips as our guide. We remembered it being easy enough, so when some friends (Lori and Butch) from the States came down to visit, we set off to find the falls again, sans guide.

I really don’t know what I should call this hike: Los Prieto Falls Hike, the Water Line Hike, or the Forbidden Hike. The hike actually follows a forbidden trail, along a water supply pipe to Los Prieto Falls. If you go up the ladder at the falls you can get to the “Infinity pool”, so maybe we should call it that!

Getting to the Trail Head

(Updated 3/11 since they occasionally open the Picnic area) We drove up South Road 191 until you get to a gate (it is supposedly open now on occasion, but we have never seen it), but you will notice a nice natural pool. There is a little trail on the left side of the road, before the bridge, that leads up to a natural pool in the Cubuy River. There’s also a pretty, waterfall to see here. We’ve been here on summer weekends and it gets really crowded with people swimming and having picnics near the river.

2/15- Sad to report I hear this area has lots of thieves, especially on weekends. Be careful. 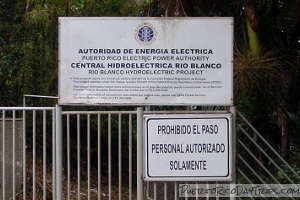 If the gates are open past the bridge, drive up to the parking area, if not, park at gate (do not block!)and walk in. You then can walk until you get to the new Rio Sabana Recreation Area, complete with a big parking lot, a number of picnic pavilions, and restrooms.

In this area, there is a large natural pool to the left of the road in the Sabana River. Also, the trail head for the Rio Sabana trail can be found uphill behind the picnic pavilions.

To the right of the road, near the entrance to the parking lot, there is a large gate across a dirt trail and a sign from the Puerto Rico Electric Authority (AEE, by their Spanish initials) stating that entry to the trail is prohibited and it is to be used by authorized individuals only. One the left side of this gate, follow the fence and there is an opening at end of the fence you can go through. Or you will find another little path to another hole in the fence a little further up in the parking lot.

Remember, the AEE prohibits access to this trail, part of which is used to maintain the Rio Blanco Hydroelectric Project. If you use this trail, you are doing it at your own risk. And as always, watch the weather and be vigilant about possible flash floods.

On the Water Line Trail 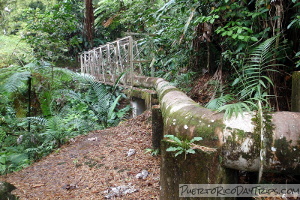 update 11/2020 This trail is no longer maintained. They constructed the water line to move the water from the upper forest rivers to a hydroelectric generating station in the town of Naguabo, located at the base of El Yunque.

We walked along the path, following the water pipe, with the Sabana River below us and to the right. There are some great views along the way of rivers and waterfalls, and views to the east coast of Puerto Rico. At about the half-way point, a small set of train tracks appeared out of the forest floor alongside the pipe. It’s my understanding that the waterline workers used small trains to move building and maintenance supplies along this trail.

This forest walk is beautiful. Lots of banana plants, flowering heliconias, and various trees like giant fern trees, Sierra Palms and Tabonuco trees, all of which made me think that I had somehow been transported back in time. I almost expected to see dinosaurs whenever we turned a corner! 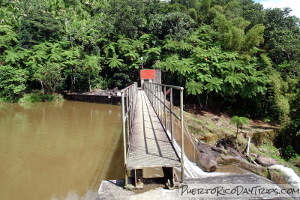 We found some wild raspberries to eat along the way, too.

Most of the trail was in the shade, but there were spots that were in full sun. A hat or sunglasses would have come in handy.

The trail was easy but much of it is now lost/washed away, so there are a number of places you have to scramble up and down steep, slippery washouts. Mostly It is relatively flat — we only had a 400-foot rise in elevation during the 2½-mile hike. There were a few places where we had to scramble up or down some rocks, and some muddy areas. We went under the pipe crossing at two ravines and used the AEE catwalk to cross a dam at the water reservoir on the Icacos River.

This used to be an easy hike, but now I would rate this as an difficult hike that takes about 4 hours round trip, if not more. 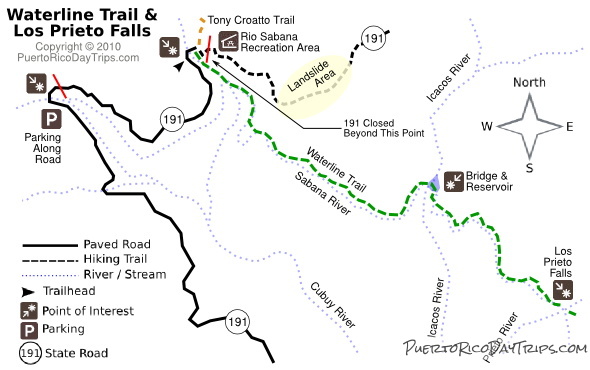 In the summer of 2010, we had so much rain it washed out the reservoir. It also seems to have changed the flow at the falls (they are less impressive now). 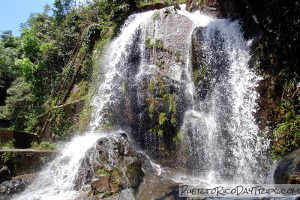 According to our GPS, it was ¾ miles from our car to the trail head and another 1¾ miles on the trail — for a total for 2½ miles from the car to the waterfall. The waterfall is located near the intersection of the Sabana River and the Prieto River.

Once at the waterfall, we found some flat concrete near the base of the falls, where we sat and had our picnic lunch.

The lower falls were nice and, due to a recent rain, pretty big — a lot more water going over the falls than I remember from our earlier trip. I would guess that this lower waterfall is about 30-feet tall. 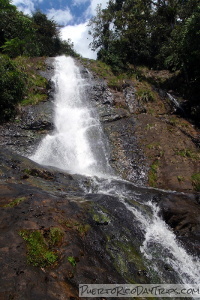 To the left of the lower falls, there is an old metal ladder that is (was) chained off — I assume to keep people from using it. It would be unsafe and dangerous to climb. But it seems everyone does- it is the only way I know to the top! The upper waterfall is beautiful and even bigger than the lower falls — maybe 50 feet tall. The views from the base of the upper falls are really spectacular! Up this upper falls area is where the “Infinity pool” is located. Not that I recommend go to the Infinity Pool, as it can be very dangerous, here is some info- at the top of the ladder, keep to the left and follow the blue markers on the trees. This is slippery and some rock scrambles. There is the occasional wire to help. After the last rope, a little further up the trail splits. The infinity pool is to the right.

ANOTHER Safety note: the ladder is old and in disrepair. The rocks are slippery. If you loose your footing, you will probably be seriously hurt. Also, never go in the rivers during a rain (flash floods happen a lot ) or even a day or two after a rain, since the current can be too strong to be safe. People have been hurt/killed while playing in this river, jumping from the rocks and climbing around the rivers. Respect nature and be safe.

The trail continues about ½ mile more past the waterfall. It eventually ends at a flat area on the edge of the earth — OK … that’s a bit dramatic. But there are more great views from the edge of the cliff where the trail ends. We didn’t didn’t get an early enough start to hike that second leg of this trail on this day. We’ll go back and hike all the way to the end some time in the future.

After spending time at the waterfall, we turned around and re-traced are steps along the trail and back to our car. At the end of the day, we had an adventurous 5 mile hike and a bunch of great photos! 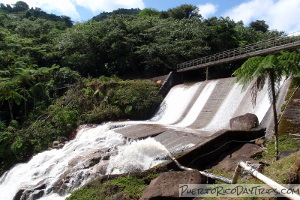 No swimming or playing is allowed in the water along this trail. The AEE used the rivers and reservoir in operating the hydroelectric generating station. There are high-suction water intakes and there are big orange warning signs all over the place. The water reservoir dam used to be controlled by a timer or something. When we went years ago, we passed the dam on our way to the waterfall, there was no water flowing over the dam. On our way back, there was a bunch of water flowing over the dam. This could cause sudden and unexpected flooding in the lower rivers and streams. It seems they don’t use it anymore, but I would still not play in the river below it! 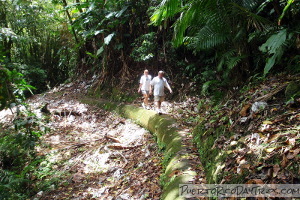 Wear appropriate shoes (no flip-flops!). Ray and I wore hiking shoes. Our friends wore sneakers, which worked out fine. The trail can be muddy and slippery. Bring plenty of water. Rain gear might help — it is a rain forest, after all!

Be aware, there have been car break-ins in this area, so take everything you value out of the car.