Walk to the End of the Waterline Trail

Posted on 08 May 2011 by Gwenn • Updated on 08 Nov 2020
Category: Hiking, Nature, Porta Antillas (East), Rain Forest
Print This Without Photos
+ Print This With Photos

Hiking is officially not allowed on this trail. 2018- After Maria- the trail in is not cleared, so it is extremely difficult and muddy. Also since 2016- I hear you now would need to climb over a fence to get in to the trail. Not recommended! 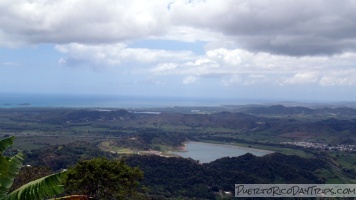 The Puerto Rico Electric Authority (AEE, by their Spanish initials) posts that entry to the trail is prohibited and it is to be used by authorized individuals only. We don’t suggest anyone use this trail, but if you do, it is at your own risk.

El Yunque National Forest is one of our favorite things to do. On my brother’s visit, we decided to go to the south side of El Yunque and walk the Waterline Trail to Los Prieto Falls, and then to continue past the falls to the end to see the view.

The first time we did this trail was in 2003, and it was pouring rain that day, so I didn’t get to enjoy it very much. Though it is an easy hike, the heavy rain that day made it seem like it was a never-ending forced-march. Since then, we have done this trail a few times, and we really like it.

Our Day on the Trail

We went on a Saturday, and we had hoped to park at the newly opened Rio Sabana Recreation Area at the end of Road 191 South. But, even though there is a big sign that says the Recreation Area is open on weekends — year round! — the gates were locked and we couldn’t drive all the way up. We ended up parking on the road and walking up to the Recreation Area to get to the trail head. 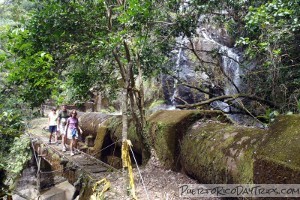 We noticed a few changes along the trail as compared to our previous hikes. Originally, the reservoir and falls were very impressive with water. In 2010, the rain did a lot of damage to the reservoir, and it changed the waterfall. Now, the water reservoir on the Icacos River is empty (April 2011), though there was some evidence that they are doing some repairs. The flow at Los Prieto Falls was also decreased severely, so it was not very impressive. But we stopped at the falls and ate our lunch. While we were eating our lunch, some men with machetes came by — I think they were trail maintenance people. After lunch, we walked across the scary railroad bridge and continued on the trail … to the end.

The trail beyond Los Prieto Falls is less used/maintained than the first part, so you do have to go under/over a few tree branches along the route. We noticed more heliconia and ginger plants and flowers. 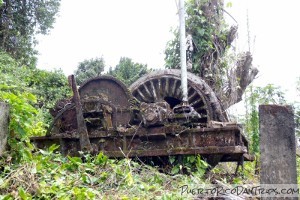 Other than the view, the other interesting thing here at the end is the remains of the rail system. This rail system was apparently used in the construction and maintenance of the pipeline, to get materials and workers up and down the mountainside. Here we found (newly cleared of vines by the maintenance guys — what luck!) was a "Lidgerwood" winch and cable system that raised and lowered the rail cars. It is a pretty steep hill, and it must have been a scary ride.

We’ve been told that, during the pipeline construction, there was a tragic accident. While a rail car filled with workers was being pulled up the mountainside, the cable broke … and the workers plummeted to their deaths. I am unable to find documentation about this incident, so I don’t know how much of the story is true. 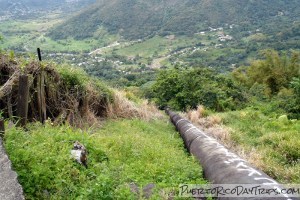 Safety Note: Be aware, this is a closed trail and you need to cross some slippery and dangerous places and some rivers. I would avoid this trail on a rainy day and NEVER go in the rivers during a rain (flash floods happen a lot ) or even a day or two after a rain, since the current can be too strong to be safe. People have been hurt/killed while playing in this river, jumping from the rocks and climbing around the rivers. Respect nature and be safe. And don’t litter.

If you’re interested in doing this hike, please refer to our earlier article about Los Prieto Falls. That article contains all the information you would need, including driving directions, a trail map, and GPS coordinates.

After you are finished your hike, you can cool off in the river at the Rio Sabana Recreation Area. Be aware-I have heard this whole South side recreation area is getting very “iffy” safety-wise in non-summer months.