1/21- Rt 191 on south side of El Yunque is open. And at times (weekends 9a-5p), the gate is open and the picnic area has been cleaned up. The Trail is open, and it has been recently cleared to the top! Most people use the lower part of it and you can picnic and play in river. But it is a difficult trail!

Sadly, I hear that there are a lot of thieves now in this area just by the gate, especially on weekends. Be careful. Don’t leave anything of value in your car. 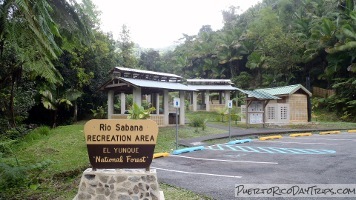 I am happy to report on the "newest" addition to El Yunque National Forest trail system — the Rio Sabana Trail. The trail head is located on Road 191 South, which gives people visiting the forest from the south side of El Yunque a trail to use.

We had originally hiked this trail in 2009, when they were still working on the refurbishment. The Rio Sabana Trail has been around for many years, but until its refurbishment, it was not an "official" trail for hikers. This was our first trip back to that trail since it was re-opened in April 2011, along with the Rio Sabana Recreation Area. 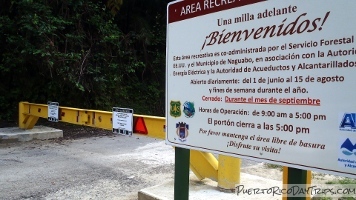 When you get to the end of Road 191 South, you will come to gates which are supposed to be opened daily from June 1 to August 15, and on weekends the rest of the year (except September, when it recreation area is closed). We have been here 3 times since the recreation area officially opened, and the gate has never been unlocked.

We’ve talked to the National Forest folks about this, and supposedly the town of Naguabo is responsible for the gate. If you go, maybe you will get lucky and will be able to drive in and park right at the picnic pavilions. If not, park outside the gate (along the side of the road) and walk the 0.8 mile in to the recreation area.

There are about 10 picnic shelters with tables, benches, and a charcoal BBQ. There is no running water, but there are composting restrooms (though we have never seen them unlocked, either).

The picnic pavilions are right alongside the Sabana River, where you can play in the water and cool down, or go for a hike on the Rio Sabana Trail. Additionally, the Waterline Trail (an unofficial trail) starts in the recreation area parking lot and leads to Los Prieto Falls.

The trail head is to the right of the picninc pavilions, up behind the restrooms. The trail map at the trail head states it is a difficult trail, 2.9 miles each way, with an estimate of 1½ hours each way. It has a gain in elevation of about 1000 feet as it goes up the mountain. 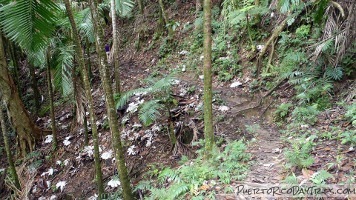 They were not kidding when they rated this trail as difficult. The trail is not well-maintained and it is not frequently used. There have been landslides, and there are lots of fallen trees that you need to go over/under/around.

The trail is packed earth with rocks, but we found it to be super muddy and slippery. It took us about 1¾ hours each way.

As you start out, the trail it is not that bad. The bottom half of the trail is used a bit more frequently than the upper half, so it is a bit wider. It starts out in the Sierra Palm forest, so it is very tropical-looking. It also has a number of spots where there are small streams you pass, and some areas of huge rocks. Some really pretty spots. 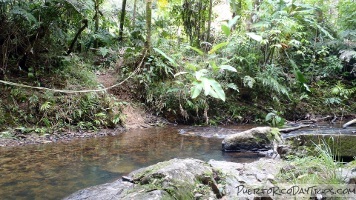 About 45 minutes to 1 hour into the trail, you will come to a river crossing. It’s our suggestion that most people stop at this river crossing, spend some time here (sit down, play in the river, cool off), and then turn around and retrace your steps back to the picnic area. This lower part is the best part of the trail, and the trail deteriorates even more to a "primitive" trail once you cross the river. The Tradewinds trail is not open, so there is no where to go anyway!

When it first opened, we were able to continue on this trail ( though it was never well maintained or marked)- we crossed the river (walk through the river as there is no bridge), there were a few places where we were happy to see marking tape that previous hikers used to mark the trail. In some parts, the trail is little more than a foot path.

The trail is overgrown with razor-grass, and trees that have grown to block the trail. There are even a few side trails that looked like they might have been the main trail. It would be easy to get off the main trail and end up where you don’t want to be. You really need to keep an eye out for tape marking the main trail. 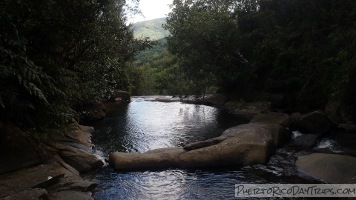 Now, having said all that, the upper part of the Rio Sabana Trail does have some pretty spots. And, because it is less frequently used, it has more flowers, wild orchids, and interesting plants not usually seen on the more often used trails. The change in elevation also brings about a change in the vegatation along the trail. It is interesting to note the types of trees and plants that thrive at the different elevations. 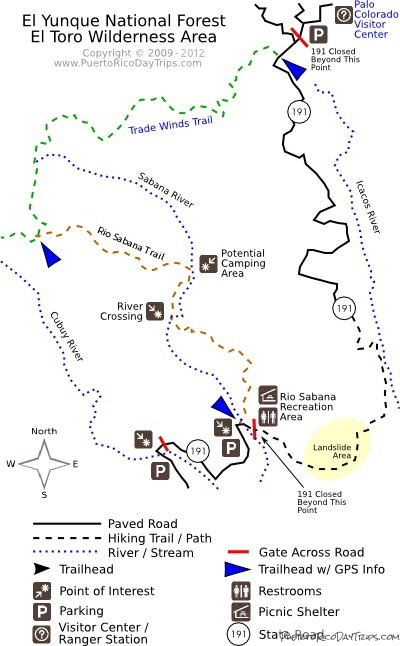 This map is our interpretation of the trails leading through the El Toro Wilderness Area. We used a variety of sources, as well as waypoints from our own GPS taken along the trails. We’ve marked the hiking trails with different colors. There’s no significance to the colors. We just wanted to be able to make the different trails "stand out" on the map. Please note that you can click on the blue labels in the map for more information.

The Rio Sabana Trail is not on my list of favorite El Yunque trails! There is no pay off at the end … no spectacular view, no waterfall … no money shot. I really think that people should just do the first half, enjoy the river, and then return to the picnic area. 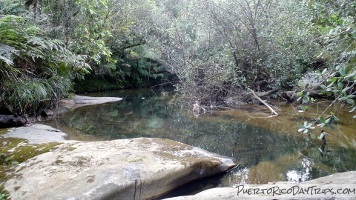 We strongly recommend that you wear hiking shoes for this trail. The upper half of the trail (after you cross the Sabana River) requires long pants and long-sleeved shirt (to avoid cuts from the razor grass).

For additional information you can contact the Municipality of Naguabo or the El Yunque National Forest office.