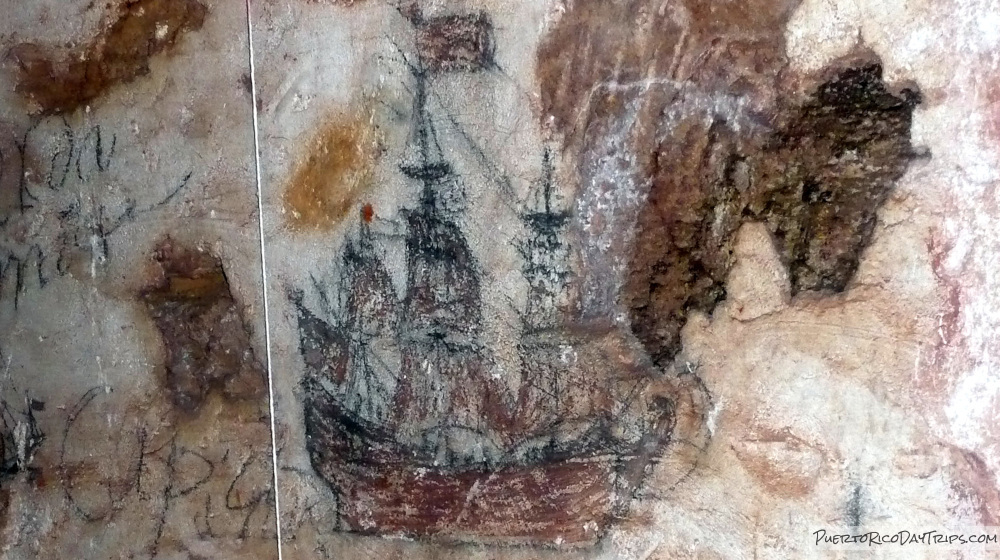 Search Out Historical “Graffiti” at the Forts in Old San Juan

To me, finding petroglyphs and any old “markings” is a way of having the past speak to us today. I have always been interested in the historical drawings and markings (graffiti) found at El Morro Fort and Fort San Cristobal in Old San Juan. These markings were made by bored soldiers who once lived and worked inside those walls. But sadly, with time, weather, and the changes that have occurred at the forts over the years, many of these historical images are disappearing. I suggest that you embark on a “treasure hunt” to look around and find as many of these as you can! 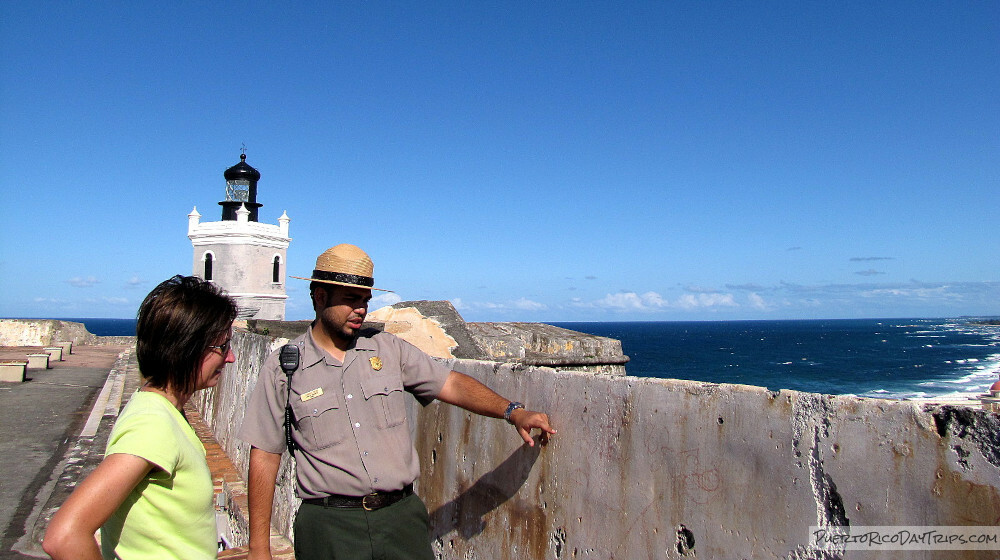 El Morro Fort, or officially Castillo de San Felipe del Morro, started as a tiny fort in 1535. Over the years, it was enlarged through the addition of new structures and walls, until it became the impressive fort that it is today. It was mostly complete as we see it today by the mid-late 1700s. Construction on Fort San Cristobal began in 1634, and became a marvel of defense for land and sea also by the mid-late 1700s. So for hundreds of years, these forts housed many soldiers who were stationed there. 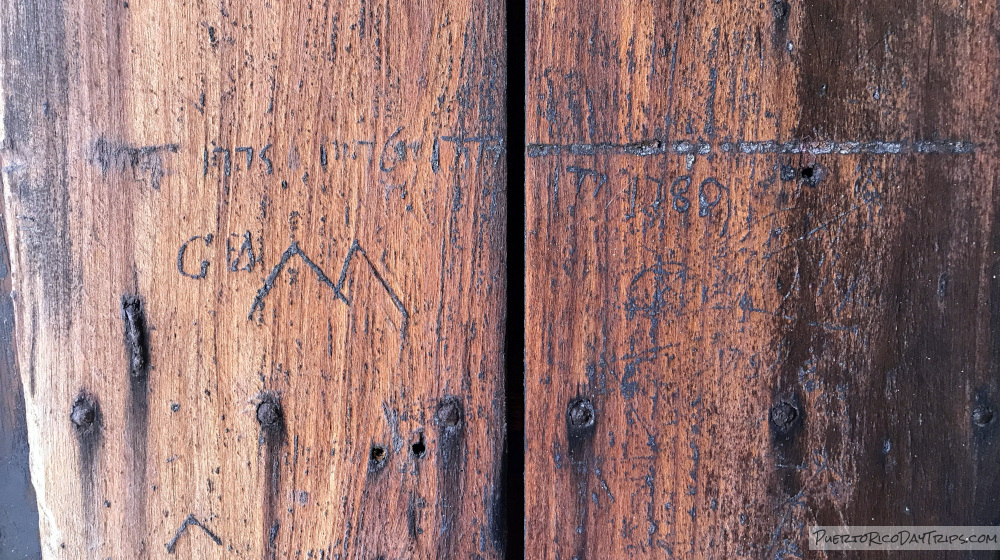 Those soldiers spent many idle hours of standing around looking at these walls and the sea — and many of them left their mark on the forts. Before 1898, the Spanish soldiers drew mostly ships. In later years, the American soldiers typically left their names and dates. 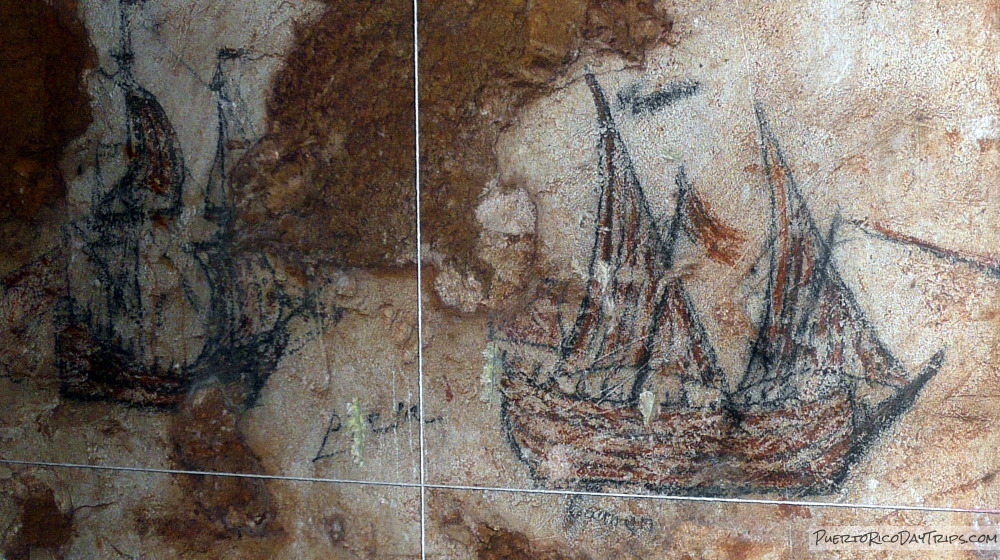 In 2006, Isabel C. Rivera-Collazo did a study of the markings, and she found over 400 of them! Most of them are sailing ships (typical from 1600s- to the 1800s), but they have documented drawings of soldiers/people, animals (horses, fish, birds), religious features, and sometimes just the signatures of the “artist” soldiers, some with dates. Of course, the most well known are the ships drawn on the wall of the dungeon at Fort San Crisotbal. 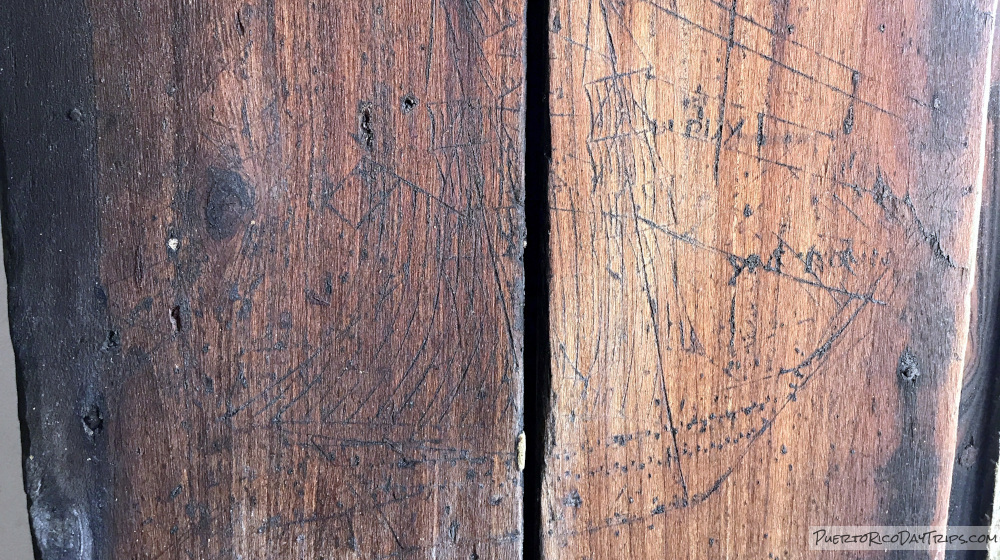 But if you search, you can find loads of these markings. My favorites are the ships and dates (1775-1780) carved into the window shutters upstairs in the barracks at San Cristobal. The El Abanico (the outworks at San Cristobal) has so many names and dates, I could spend hours checking them out! 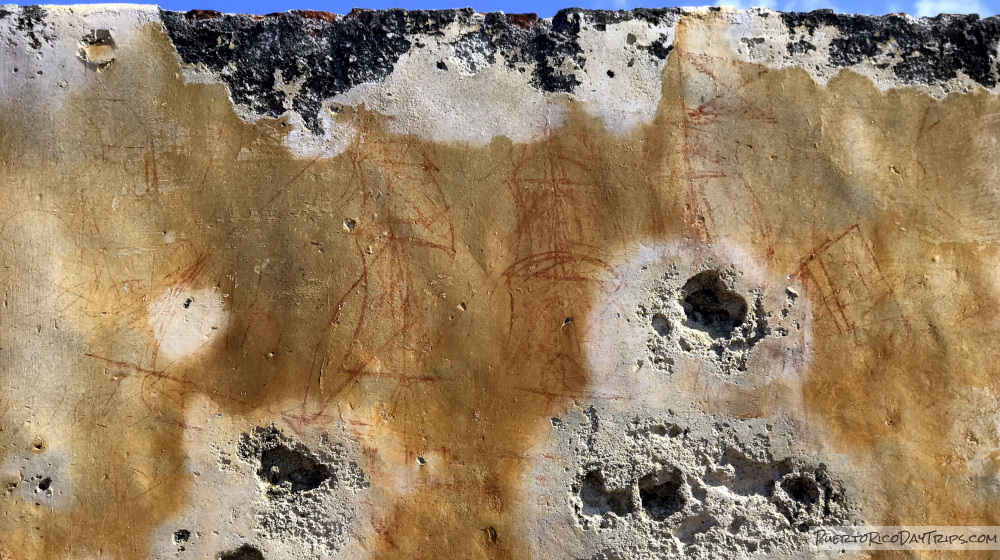 To find them, think about where the soldiers spent a lot of time, just standing around, being on “look out”. Places such as the walls on the different fort levels, the garitas or walls going to the garitas ,and the original “Old Tower” in EL Morro. Then look for the original (beige/cream) plaster. Then look for the red markings … you will soon see parts of sails of ships. Not sure why they are red, not sure what they used, pieces of bricks maybe, but looks like a waxy pencil to me. 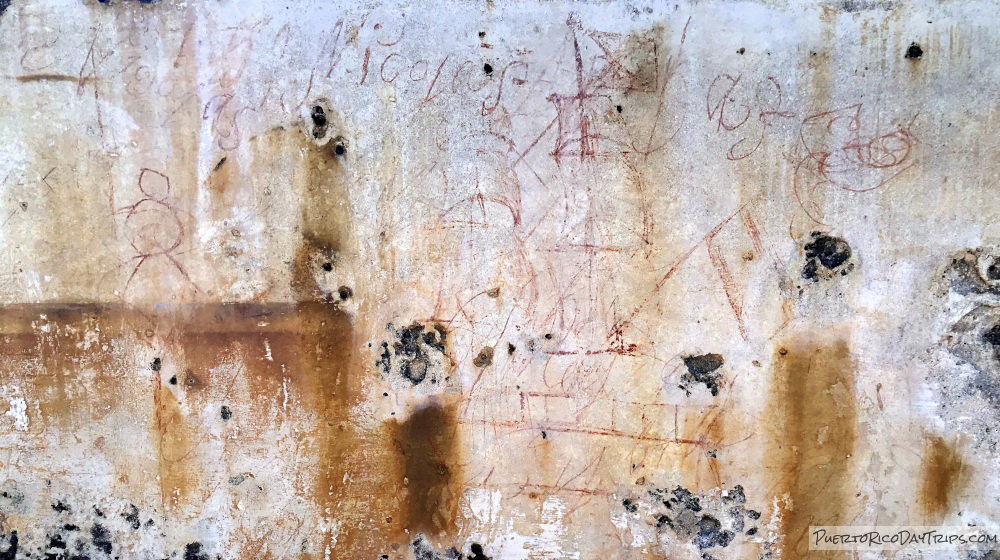 They sometimes used black (charcoal maybe?), but red is the most prominent and easy to see. These are drawn on the plaster. Also look for some etched dates and names. I have found mostly sailing ships, some names (like Nicolas, who had beautiful handwriting!), and I did find one bird! Hint – El Morro has LOADS of these red ships!

Once you start finding them, you will be amazed at how many there are! I find it fascinating. I imagine at one time in early 1800s, the walls of EL Morro must have been covered with these graffiti drawings!

For more detailed information, you can read the research paper Historical Ship Graffiti on the Walls of San Juan’s Spanish Defence System: an Interim Report by Isabel C. Rivera-Collazo.

Admission to the forts is required. National Park passes work here also. One paid admission is good for both forts.