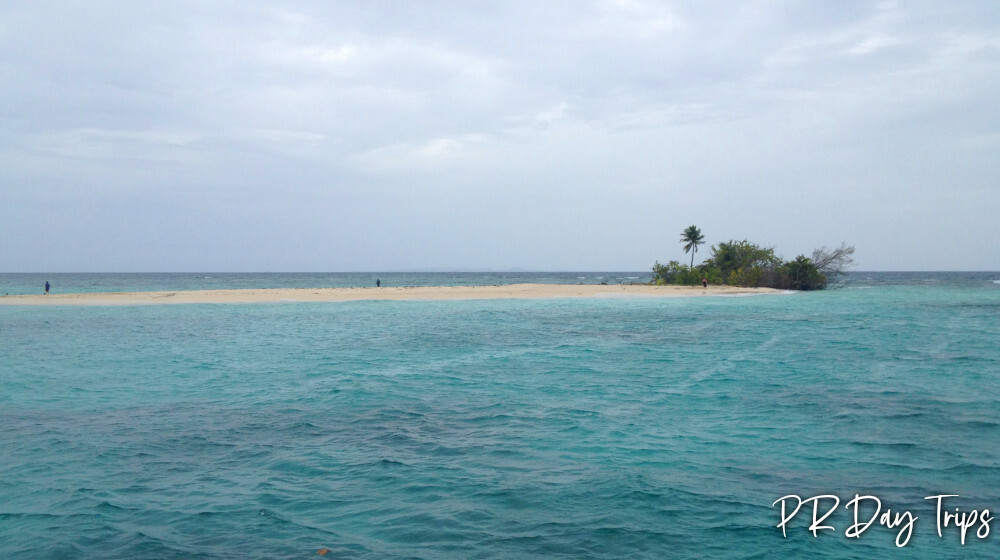 Update 8/18- The island is almost gone..Hurricane Maria didn’t help it any, now it is just a small patch of white sand 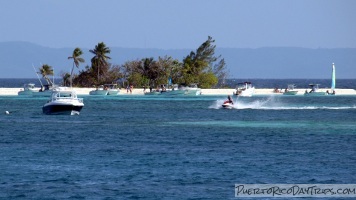 Palominitos Island (Isla Palominitos) is a small cay about 4 miles east of Fajardo. It is one of about 10 small islands and cayes that comprise La Cordillera Nature Reserve (Reserva Natural La Cordillera), which is managed by the Department of Natural Resources (Departamento de Recursos Naturales y Ambientales) or DRNA by its Spanish initials.

A cay (sometimes called a caye or key) is a small, sandy island formed on the surface of a coral reef. Cayes are built up by ocean currents that deposit loose sediment across the top of a reef formation. Over time, layers of sediment build up, and a low-elevation island emerges from the surface of the ocean. By their very nature, cayes are fragile structures that are at the risk of erosion by ocean currents. 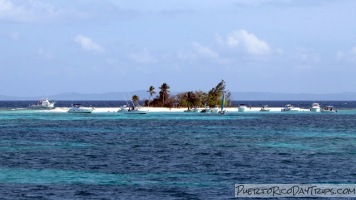 Palominitos Island is a white sand beach, with a handful of palm trees and other vegetation, that is very popular with the local weekend boating crowd. Additionally, a number of the snorkel boat companies that operate trips out of Fajardo make a stop at or near Palominitos Island after spending the morning at Icacos.

We have been to Palominitos Island ourselves on a number of occasions for snorkeling, on a sunset cruise, and to watch the full moon rise. We have had guests who have stayed in our vacation rental go to Palominitos to get engaged on a deserted beach at sunset. There is just something magical about a little spit of white sand in the middle of the turquoise blue ocean.

The island has also played a role in major Hollywood movies and local television shows. Most recently, in the fall of 2010, Johnny Depp and Penelope Cruz were on location at Palominitos Island for the filming of a couple scenes for Pirates of the Caribbean: On Stranger Tides.

But something is happening to Palominitos Island — it looks like it is disappearing back into the ocean from which it was born.

The photos here tell the story. We took the above photos on 04 January 2012 (let’s call those the "before" photos). The photos below were taken on 25 August 2012 (let’s call those the "after" photos). All of these photos were taken from roughly the same angle — from the west side of Palominitos Island, looking across the island and toward the east. 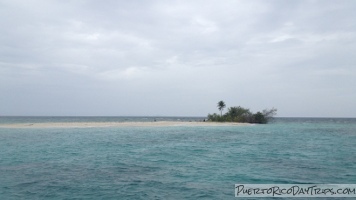 It’s easy to see from these photos that the south east (right side of the photos) of the island is eroding.

Notice the palm trees. In the "before" photos, you can clearly see 3 palm trees, and some other vegetation. In the "after" photos, only a single palm tree remains, and the trees at the far right in the photos is very close to falling into the ocean. Once the vegetation is gone, there will be nothing to keep the remaining sand from being lost to the sea.

What has happened to cause this much erosion in a short, 7-month timeframe?

I spent some time today discussing this with Dr. Ingrid Klich, a former geology professor at the University of Puerto Rico (UPR), who holds a PhD in Soil Sciences. She has been witnessing this erosion first-hand over the past couple of months. She brought this situation, and these "after" photos, to our attention earlier today.

Dr. Klich says that there is a natural process that occurs this time of year, when the winds shift to the south and southeast, that causes erosion and the shifting of sediment in La Cordillera. But she has never seen such a drastic change in the size/shape of Palominitos in a single season.

Obviously, the islands are affected by the storms that we have in the summer. For example, when Tropcial Storm Irene came through the area last August, there was considerable erosion and the waters around La Cordillera were cloudy with sediment for weeks afterward. We have not had any weather that bad lately. Even the passing of tropical storms Ernesto and Isaac over the past couple of weeks has not stirred up that much sediment in the local waters. 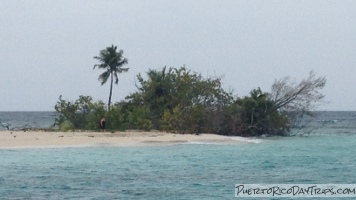 Dr. Klich feels that this accelerated erosion is man-made, and is the direct result of the new, high-speed ferry service between Fajardo and Culebra that began in June 2012. These new ferries are considerably larger, and travel at faster speeds, than the older ATM passenger ferries. These bigger, faster boats push a lot of water, causing huge and destructive wakes.

It is Dr. Klich’s opinion that simply re-routing the ferries farther away from Palominitos, or traveling at a slower speed while in the vicinity of Palominitos, will stop the erosion that is threatening the island.

What Can Be Done to Slow the Erosion of Palominitos?

The DRNA is the agency responsible for managing La Cordillera Nature Reserve. They collect a fee of $4/person from everyone that goes on a commercial snorkel boat trip into La Cordillera. This fee is supposed to go toward protecting the nature reserve and for the maintenance of facilities (like mooring balls) for use by Puerto Rico’s boating community.

It’s our belief that these fees should also be put to use to monitor the marine ecosystem in La Cordillera, including the impact of all boating traffic that goes through the area.

The DRNA needs to begin monitoring the erosion of Palominitos Island, and begin collecting data on currents, surf levels, and wake caused by nearby boating traffic. Of course, collecting data will take time. The sad part is that Palominitos may be completely gone by the time the data is collected and the numbers are crunched.

In the short term, it is recommended that the high-speed ferries to Culebra be re-routed farther south of Palominitos, boating traffic near the south side of Palominitos be limited, and that a no wake zone be established immediately.

Additionally, if any of you (our readers) know someone at the DRNA, the Maritime Transport Authority (ATM), or even the Puerto Rico Tourism Company — contact them and let them know your concern about the situation. We need to get people from the right agencies looking at this problem before Palominitos is gone for good.