The Cisterns Beneath Fort San Cristobal

Since we wrote this article, the cisterns have been refurbished, they are being used to provide non-potable water to the forts. Since they are now full of water, the cisterns are no longer available to be toured. 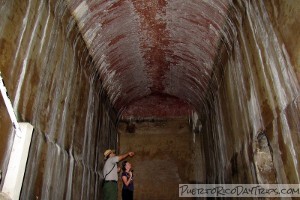 The forts of the San Juan National Historic Site are hundreds of years old, and they hold many secrets from the past. Throughout the forts, you’ll find etchings on dungeon walls, underground tunnels, mortar shells embedded in the walls, and centuries-old graffiti.

You can discover some of these just by wandering around by yourself. There are others that can be discovered only by talking with a ranger or with a guided a tour to some of the lesser-known areas of the forts.

One of those more secret areas is the water cisterns located below Fort San Cristobal. We had the chance to visit those cisterns, and we were amazed by what we found.

When the Spanish first came to Puerto Rico, they found that there was no source of fresh water in (what is now) Old San Juan. They realized that they would need to do something to maintain a constant supply for the troops at the fort.

When they were building the forts in the mid 1700s, their design called for large, underground cisterns to hold their water supply. The design of the forts included sloped floors (in the large outdoor plazas) and roofs that channeled rainwater into a system of drainage ducts that led to the underground cisterns. The cisterns are masonry collection tanks lined with lime and hydraulic mortars, which were chosen because those materials are stable when submerged underwater. The rainwater collected in these huge cisterns could provide enough fresh water to satisify the water needs of the entire fort for months. 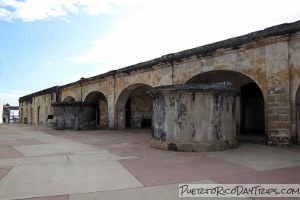 In the main plazas in both forts, you can see large wells. Until recently, most people would use them as wishing wells — tossing loose change into them. But, those wells were actually open to the cisterns below, and that was how the Spanish soldiers had access to the water supply.

There are cisterns below both El Morro and Fort San Cristobal. Back in 2010/2011, before the restoration was complete, one of the rangers suggested we visit the cisterns at Fort San Cristobal. Those ones are a little more interesting, since a couple of them contain paintings on the walls.

On the day of our pre-arranged tour, with flashlights in hand, we followed the ranger through a couple off limits areas at the fort, and we arrived at the doors that lead to each of the five cisterns beneath the fort. Going through a doorway, you find yourself at the top of one of the cisterns, with steps leading down to the bottom. 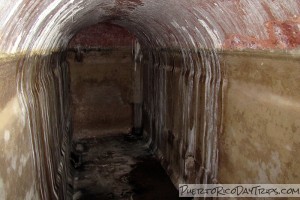 These cisterns are huge! Being inside, you have the feeling of being in a cavern or a large church. It is extremely "echo-y" inside.

Each cistern is about 30 feet tall, 20 feet wide and 60 feet long. They hold 145,000 gallons of water a piece. They each have a high, arched ceiling overhead, and a couple are interconnected so that a constant water level can be maintained across the series of cisterns.

Over the years, the cisterns have been altered and re-purposed. During World War II, they were used a bomb shelters — the yellow and black Fallout Shelter signs were still on the walls!.

During this visit, we were only able to access four of the five cisterns at Fort San Cristobal because the park service actually used one of the cisterns to supply non-potable water for use in the toilets in the restrooms of the fort’s visiter center. Starting late 2011, they finished the refurbishment of the cisterns and actually are using most of them as a water supply. This allows the fort to maintain working restrooms even when the public water supply in Old San Juan is cut off. 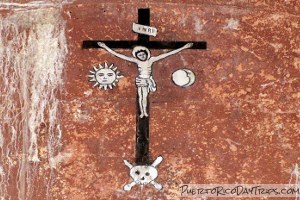 I am happy we were able to see the inside of these before they were put back in service. We were able to see that three of the four cisterns have a religious figure painted just above the waterline — presumably to watch over the water supply and keep it safe and clean (remember, back in the day it was the drinking-water supply). The dates and the artists of these paintings are unknown, but they were interesting to see nontheless.

The Current use of the Cisterns

The National Park Service has finished restoring the cisterns. They have retrofitted some with filter systems to provide clean (though still non-potable) water for the fort. They have restored four 145,000-gallon cisterns at Fort San Cristobal, three cisterns (totaling 213,000 gallons) at El Morro, and the largest cistern (430,000 gallons) at El Morro — for a grand total of 1.2 million gallons of collected rainwater.

We’d like to thank Joandiel Resto and Dilcia González (both from the National Park Service) for giving us the "behind the scenes" tour and providing us with additional information about the cisterns at the forts.