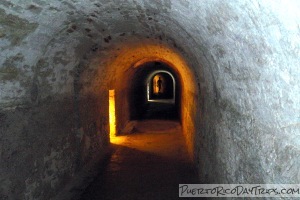 The forts in Old San Juan are amazing architectural marvels and defense systems, full of secret tunnels and passages. The National Park Service offers a guided Tunnels Tour at Fort San Cristobal on which you can learn about the fort and its defense systems. This tour also provides the opportunity enter a tunnel under the outworks that is normally off-limits to visitors. The tour is free, takes about 1 hour and is so worth doing.

Fort San Cristobal is a massive fort that was started in 1634 and took more than 150 years to complete. It was "state of the art" for land defense. It was built with many special features to prevent an enemy from gaining access to the inside of the fort — many dry moats, many different levels with gunnery positions, and tunnels & passageways that allowed the Spanish troops to move unseen between levels and different parts of the fort.

But many of those tunnels were also part of the defense system — they could be secretly set with blackpowder and be exploded to stop incoming troops. Luckily, they were never used, so they are available for study and now for educational purposes during this special Tunnels Tour. 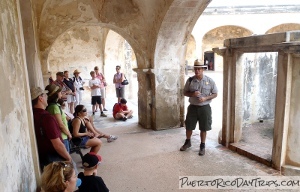 Ray and I have been to Fort San Cristobal many times before, but we had never had the opportunity to go on this special guided tour. So, one day we made a special point to get to the fort early to sign up for the Tunnels Tour.

NPS ranger José Gonzalez started the tour promptly at 10:30am. He did a great job, besides being very personable and educational, he was also comical, so he kept everyone entertained on the tour. He also played to the kids a lot, which kept them interested, too.

The tour began with discussion of what Old San Juan was like back in the 1600s, the reasons why the forts were built, the battles in which El Morro and Fort San Cristobal proved to be successful defense systems, and an overview of the structure of Fort San Cristobal. After that introduction, we moved to an area with tunnels in the main plaza and we discussed the roles the tunnels played in the defense system. We have walked through these tunnels many times of the years and never really thought about them in that way. This tour gives you a whole new appreciation of the work and planning that went into the construction of the fort. 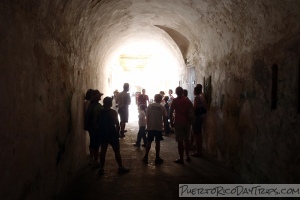 José touched on many aspects of the fort as we walked through it, like what it was like in the 1800s, how it was used in World War 2, and how it has been used recently used as a movie set. We then went to the outworks and learned a bit about them and that area’s role in the defense system.

José pointed out a chimney (that we all took turns looking into) that provides a little light and air circulation for a tunnel deep beneath our feet — the tunnel that we would be exploring.

After the outworks, the next stop on the tour was at the tunnel that runs deep beneath the ground. This is one of those tunnels that could be exploded if enemy troops had managed to breach the outer defenses. It is about 5 feet high and about 4 feet wide, and pitch dark (except for the little light coming through the chimney). 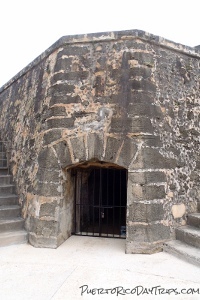 Back in the day, some poor soldier would have to enter it with just a torch in one hand and black powder in another, to set the charge to blow-up attacking troops. We had it easy — only had to work up the courage to go into this long dark tunnel.

They give everyone a flashlight and you have to duck your head as you walked single file through it following the ranger. Once you got to the end of the tunnel, there were 2 tiny air vents that opened over the Atlantic Ocean. Then you turned around and walked back to the entrance. By this time, your eyes have become more accustomed to the dimness and you can see the hermit crabs that call this tunnel home.It kind of freaked one kid out.

The tunnel is kind of stuffy, and it is small and dark. People with claustrophobia stayed outside and waited for the rest of the tour.

I enjoyed this tour very much and really recommend it. It enhances any visit to the fort and makes you appreciate this World Heritage site even more.

Even if you have been to Fort San Cristobal in the past, you may want to go back. Late in 2009, they redid the signage throughout the fort and opened the outworks to tourists (previously, this area was only accessible on a special tour). There is new information to learn and things to see, so even if you have been there before, you should stop in again to check it out. It is really nice. Lots of things were "new to us". 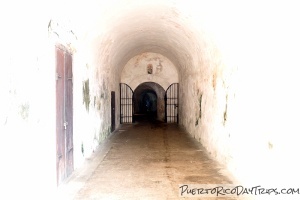 The Tunnels Tour is offered on Weekends – last I heard it was English on Saturday at 10:30am, Spanish on Sunday at 10:30am . Check with the fort for exact dates, times, tours and language for the tour..

They limit the size of the tour to 15 people, so be sure to sign up for the tour when you pay for your ticket to the fort.

The Tunnels Tour lasts about 1 hour. Leave extra time (before or after) to wander around the fort.