Posted by Gwenn • Updated on 13 Feb 2021
Category: History, Old San Juan, Tour
Print This Without Photos
+ Print This With Photos

The outworks area is still closed, no tours at this time of this area. Check their Facebook page or website for events. 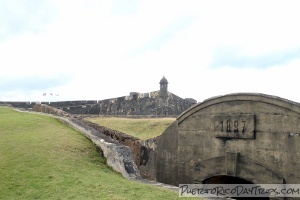 Recently, we had the opportunity to take the Outworks Tour at Fort San Cristobal. This tour highlights just how much of a military engineering marvel this fort is, and how it is designed with all sorts of boobie traps, and visiual deceptions, to really mess with the heads of any invading enemy’s troops.

Fort San Cristobal consists of two main areas that play different roles in the fort’s defense system. The first area is the main courtyard and the surrounding buildings. The is the only area that most people visit when touring the fort. The second area is the Outworks. This is the area beyond the walls of the main courtyard. 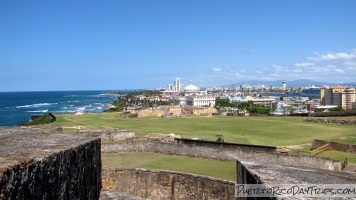 To the casual observer, the Outworks looks like a big, grassy lawn. But, in fact, the Outworks was the first line of defense for the fort. On the Outworks Tour, we learned about how these structures helped protect the fort and the people living inside of it.

We took this tour on a hot Saturday afternoon. After signing up for the tour at the guardhouse, we met Sebastian, our tour guide, in the courtyard and got started on the tour.

Sebastian had us imagine that we were enemy troops for the day, all the while explaining the rational behind the structures that make up Fort San Cristobal. 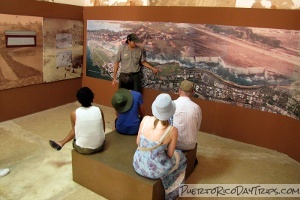 The fort is situated on the rocky north coast of the island, which is not a good place for an enemy ship to drop anchor, due to huge waves, and shallows created by rocks and reef formations. Enemy forces arriving by sea needed to find a nice harbor for their ships (let’s say in the area that is now Condado), and then try to march into the city and take the fort by land.

This actually happened during an attach by the Dutch in 1625, and the Spanish government knew they had to reinforce their land defense — so they built more fortifications on the eastern end of the city.

When the British attacked in 1797, the new harbor forts and bastions (like Fort Geronimo, the Escambrón Battery, and the San Antonio Fortified Bridge) stopped the attacking forces before they even got close to Fort San Cristobal.

But Fort San Cristobal was designed to sabotage any enemy troops that made it that close to the city. The Outworks is a series of defenses such as open spaces, tall, thick walls, dry moats, tunnels, and artillary posts. 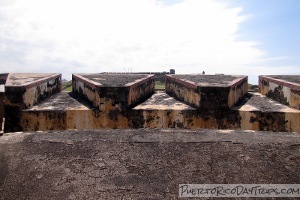 As honorary enemy troops for a day, we headed to the most eastern part of the Outworks, El Abanico, so we could see the fort from the point of view of would-be attackers.

El Abanico is a fan-shaped platform which provided a good view and a good shooting position to get any enemy troops coming up the hill toward the fort. If the enemy could get up the hill to the fort, then they would encounter a series of walls and moats to get over and through, all the while dodging cannon fire and rifle shots.

Next, they would have to cross an large open expanse of grass with nothing in front of them except more tall fort walls, with cannon and musket barrals pointing their way. 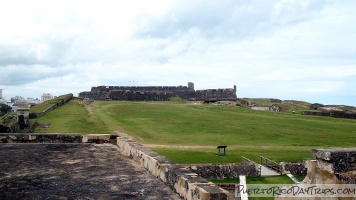 The fort is strategically built on a hill, with dry moats around it. It was built so that its looks deceived approaching troops — an enemy wouldn’t realize their next obstacle until got get close to it.

Sebastian lead us to an area of the large lawn where the Spanish constructed underground tunnels, which were yet another boobie trap. Explosive charges could be set in these tunnels so that they could blow-up the ground beneath the feet of the enemy. 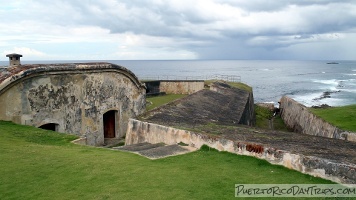 The current-day fort is missing two rows of walls across the Outworks. So, back in the day, it would have been even more difficult to get across the obstacles in the Outworks — it was just row after row of walls that would have to be scaled. There is a model showing the original design of the Outworks on display in the museum inside the fort.

If the enemy made it past all the obstacles in the Outworks, and made it up to the walls of the fort itself … they would still be stuck. They would have to figure out some way to climb over the walls, or find that tunnels that lead through the walls and into the fort.

Even these tunnels were engineering feats. They were designed with curves and hills, that you can’t see around or over. There were no lights in the tunnels, so the enemy would be going into a pitch dark tunnel that wasn’t straight. 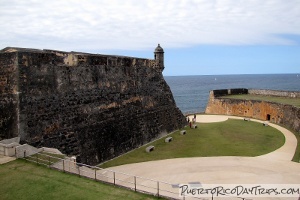 Since the tunnels were constructed of brick and concrete, all sounds echoed, further disorienting people who didn’t know their way through them. The tunnels acted like amplifiers for sound — back in the main courtyard, the Spanish could tell exactly where the enemy troops were in the tunnel. Oh, and these tunnels could be set with explosives, too, just in case they had to blow up enemy troops who were close to breaching the final defenses of the fort.

This tour really gives you an idea of what it must have been like to be a foot soldier in an attacking army. Fort San Cristobal was designed, using all the latest military technology, so that it would be impossible to be taken by force. Though these defenses were never tested, I belive that they probably would have done their job quite well.

The Outworks Tour is offered at Fort San Cristobal on weekends at 3:30pm (Sat- English, Sun- Spanish). There is also a tunnels tour offered on weekends.

There is a maximum of 30 participants for this tour.

Allow about 1 hour for this tour. Leave extra time (before or after) to wander around the fort.