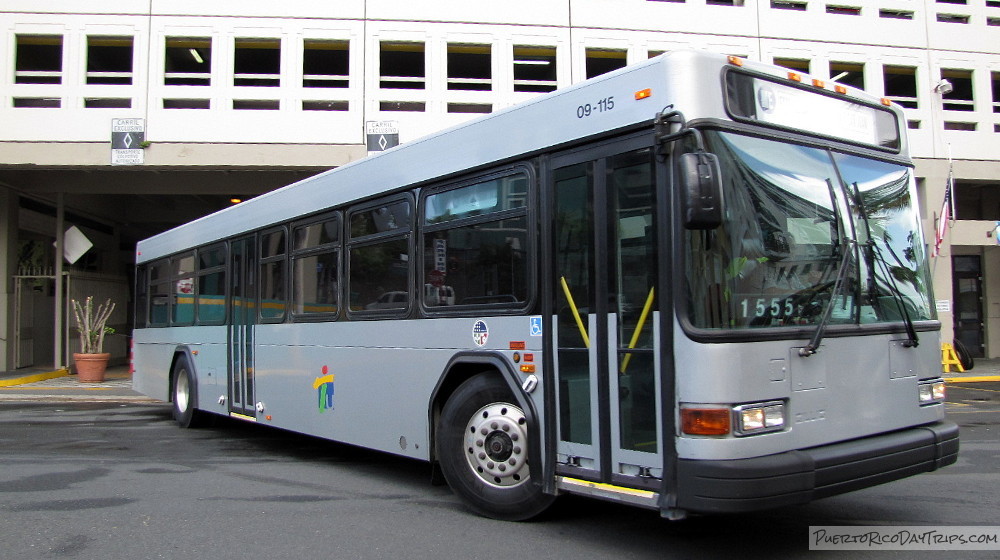 We have not been able to update this article yet, so check : bus map. Check out this app that will help you get around in San Juan! Moovit- Find my bus

The operating hours for the AMA buses will be Monday through Friday from 5am to 9pm, and Saturday and holidays from 6am to 8pm. They do NOT run on Sundays..

Information on the public bus system is hard to find. To counter that, we’ve put together this brief guide, and we’ve scanned the AMA bus route map, in the hopes of making travel on the island a little easier for at least a few visitors.

Let’s get this out of the way Right up Front

The bus routes were last updated in November 2013, and the information and maps below reflect the new routes.

The easiest way to travel around the island is to rent a car. Driving here is easy enough, and having a rental gives you the flexibility of going where you want, when you want. 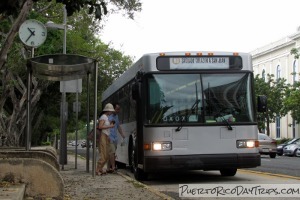 If you don’t want to rent a car, the next best option is taking taxis around the metro area. They are faster and easier, but also more expensive in the long run.

We realize that not everyone has the option of renting a car or taking taxis. So it’s for those people that we’ve put together this brief guide.

There is a DTOP-AMA web site with an "interactive trip-planning" route map — but it doesn’t work, so we’re not going to say more about it until it does. That’s why we scanned the printed AMA bus route map, which you can find toward the bottom of this article. 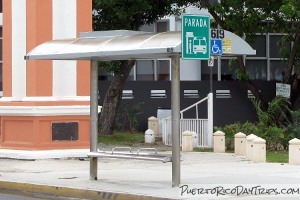 The bus system is a series of different routes that go around the major areas of San Juan. The bus stops are called paradas. On each parada, they have posted signs that indicate which buses stop there, and the supposed time schedule.

Do not expect that information to be accurate. Buses do not run on time. The buses are not immune to the traffic jams, so they arrive when they arrive.

When the bus is coming, flag the driver down, so he knows to stop for you. Before getting in any bus, double-check (by asking the driver) that you’re getting onto the right bus for where you want to go. The drivers should be able to help you with connecting routes, too.

There are pros and cons to taking the bus. On the positive side, they are cheap and air-conditioned. On the negative side, they can be crowded, they don’t adhere to any real time schedule, you cannot take luggage onto the bus, and they only operate from about 5am or 6am until 9pm or 10pm (depending on the route).

The bus fare is 75¢ for all routes, which includes a transfer to the Tren Urbano within a 2-hour window.

Some of the Bus Routes in the Metro Area

We are re-working this section to reflect recent changes in the routes. Take this info with a grain of salt for now.

We are not able to keep this article updated, so check : here for the new bus routes and times. Or Check out this app that will help you get around in San Juan! Moovit- Find my bus

Note that the actual route numbers that will be displayed at the paradas may differ from the route numbers displayed on the buses. Sometimes the route is prefixed with A, B, C or T, and sometimes it’s just a number with no letter. All that really matters is the route number. For example, A21, T21 and just plain 21 are all the same route. On the scanned AMA bus route map, the routes are listed without prefixes. 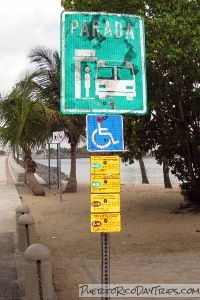 Metrobus 1 (M1) starts in Old San Juan and passes through Santurce and Hato Rey en route to the Sagrado Corazón stop in Río Piedras, and then returns. It may be labeled as M3 for the OSJ-Santurce loop until Sagrado Corazon Station where it is M1, but I can’t say for sure.

Metrobus 2 (M2) starts at the Parada 18 stop, heads to Sagrado Corazón to Hato Rey to Roosevelt Avenue (by Plaza Las Americas Mall) to San Patricio via Route 2 to Bayamón and returns.

T5 starts in Old San Juan, follows Ponce de Leon Avenue through Miramar, turns left on Jose de Diego Avenue, continues along Calle Loiza and Isla Verde Aveue, ends at Iturregui station, then returns. Note that the maps on the wall in the AMA terminal in Old San Juan, as well as the signs on the bus stops (paradas), say A5 for this route (even though A5 no longer exists).

21 starts in Old San Juan, follows Ashford Avenue through Condado, continues south to Hato Rey, goes past the PR Convention Center, ends at Sagrado Corazon Station, and then returns. Note that the maps on the wall in the AMA terminal in Old San Juan, as well as the signs on the bus stops (paradas), say B21 for this route (even though B21 no longer exists).

C45 or T45 runs from Iturregui stop along Los Angeles Avenue to Isla Verde through Piñones to Loíza.It no longer goes to the airport.

C53 or T53 starts at Old San Juan, goes to the PR Convention Center, heads to Condado and Ocean Park Calle Loíza, then onto to Isla Verde via Isla Verde Avenue, and then returns.

the new operating hours for the AMA buses will be Monday through Friday from 5am to 9pm, and Saturday and holidays from 6am to 8pm. Check : here for the new bus routes and times.

We’ve taken a look at the bus routes, and have some suggested routes from the Isla Verde and Condado areas to some plces in the metro area frequented by tourists.

To the PR Convention Center

Luiz Muñoz Marín (SJU) Airport — There is one bus route that goes to the SJU airport, but it has to be noted that luggage is not allowed on the any of the AMA buses. Only small, carry-on items are allowed on the buses. There are 3 stops on the airport 2nd level (Departure level) at terminals A,D,and E.

To the Tren Urbano

To the Rio Piedras Market and UPR 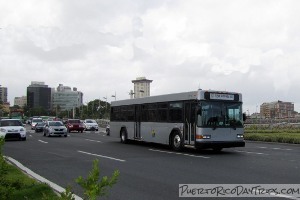