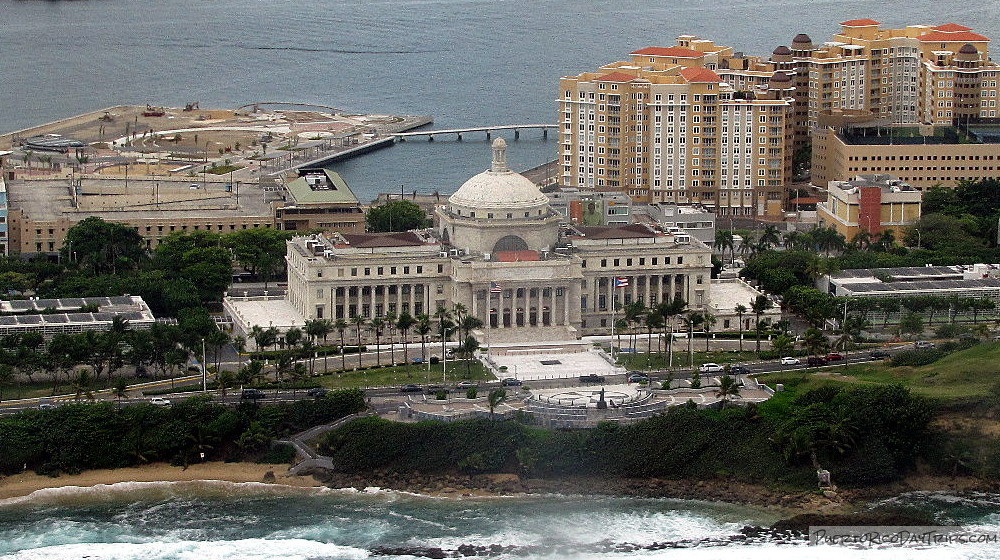 The first three parts (1, 2, 3) of our walking tour took you to most of the older, historical sites in Old San Juan. This fourth installment leaves the “old world” and moves on to the “newer” parts (relatively speaking) of the city … those parts constructed in the late 1800s and early 1900s. Many of the buildings that you will visit on this tour are listed in the National Register of Historic Places.

At the corner, turn left (eastward) and take a moment check out the copper-domed building. This building, called the Antiguo Casino de San Juan, was built in 1917. This was “the place” for the Spanish gentry to gather for social events, until it closed in 1942. The elegance of the place is amazing, with marble staircases, balconies, and mirrors that reflect the wealth of that upper class of society. The building has been restored and, though it is not open for tours, it is available for parties, weddings, and other events. From the outside, you can still sneak a peek at the pretty gardens that surround it. 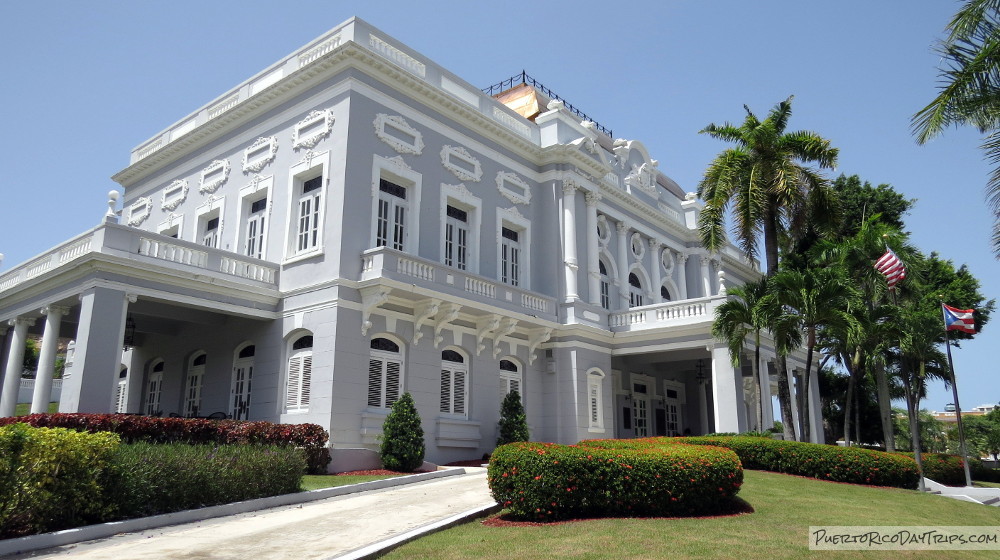 Diagonally across the street (on the south side of Plaza Colón), you’ll find the Tapía Theater (Teatro Alejandro Tapía y Rivera). This theater opened in 1832, and has been a venue for plays, operas, ballets, and other musical and cultural performances since that time. Inside, it has very elegant old-world style, with 3 levels of “box seating” instead of just balconies. It is still in use today, having been refurbished many times over the years. Occasionally, they offer tours of the building, but plan on catching an event there to really get the feel for the place. 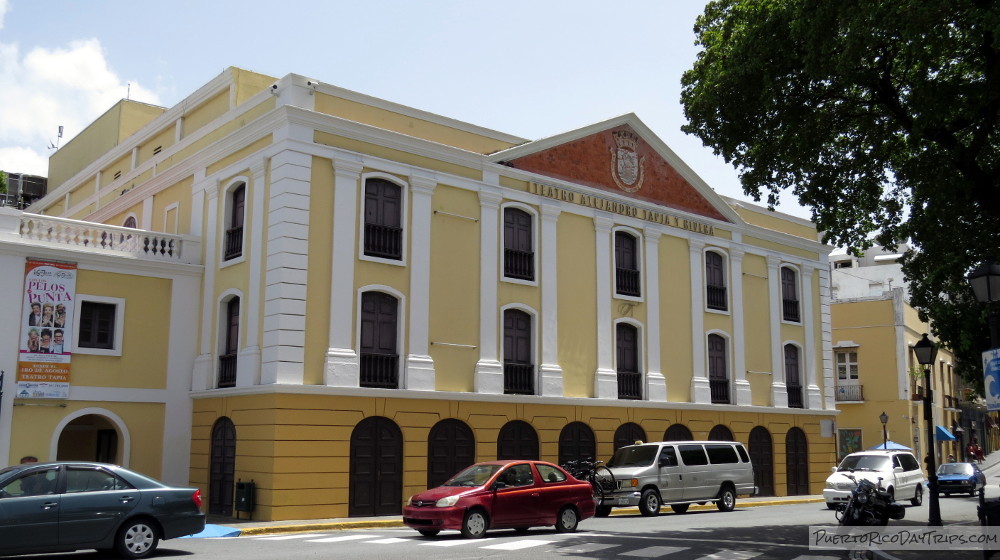 If you walk just a little bit south (toward the bay where the cruise ships dock), you will see a little, pretty peach-colored building. This old building (from sometime late 1800s) used to be a Casillas de Camineros, which is a house for the road maintenance workers and their families. It has been beautifully restored, and is now the home of San Juan Municipal Tourism office. Stop in for some air conditioned comfort, with chairs, free WI-FI, and of course, some visitor information!

Next, you’re going to back-track toward the Tapía Theater and Antiguo Casino, and you’re going to turn right (eastward) on Route 25 (Ave Ponce de León). This is the beginning of the Puerta de Tierra section of Old San Juan. There are a number of buildings along this road with wonderful architecture.

The first building on this street is Casa Olímpica, built in 1913. For a time, this building was the YMCA (Young Men’s Christian Association) and was the fist public pool under a roof in Puerto Rico. Today, is the home of Puerto Rico’s Olympic Committee. If it is open, take a peak inside … it is really lovely.

The next building is Ateneo Puertorriqueño, built in the early 1920s, was the home of a group (started in 1888) dedicated to higher learning, to promote science, literature, and the fine arts. It was used as a library, meeting place, and venue for cultural events. You are welcome to go in and check it out. Both the Ateneo Puertorriqueño and Casa Olímpica buildings have wonderful Moorish influences in their design — with the beautiful mosaics and rounded windows.

Continuing eastward, the next building is the Carnegie Library, built in 1917. This was an early public library, which has been through many restorations — but is in need of another. Currently, I believe it is under repair, but it may be open.

Next on the street is the beautifully restored Casa España. This is now a Spanish restaurant, so make reservations and check it out — the inside is as gorgeous as the outside. 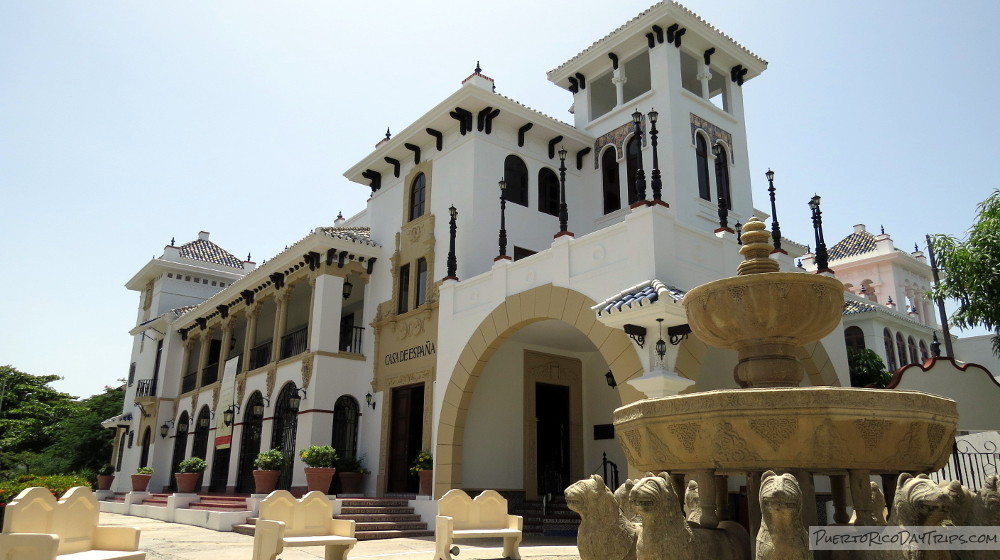 Next, head across the street and you will come to a row of monuments. The Holocaust Memorial is bilingual and moving. There is also a memorial for the teachers, Police fallen in the line of duty, Puerto Rican soldiers, the Row of Presidents (life-size sculptures of all the presidents that have visited the island), and other beautiful statues and art work. There is also a little playground for the kids.

If you keep walking, at the far east end of the area you will see the School of Tropical Medicine buildings that have wonderful “gingerbread” ornamentation … that looks more like gargoyles than gingerbread to me … but it is still very pretty.

You could not have missed the Puerto Rico Capitol building (El Capitolio de Puerto Rico) as you were walking down the street. Take a walk back to it, and go around to the front (ocean side) of the building to get in. It is open weekdays, from about 9am to 5pm.

When you are done touring the Capital building, you can go across the street to the north waterfront area. San Juan Bautista Plaza (Saint John the Baptist) has a nice view and has steps down the a local beach called Playa Bajamar. The little pool is surrounded by a coral barrier, which keeps it calm. This beach is also great for seaglass collecting.

When you are done, in the Capitol area, turn around and walk south to the other side of the Old San Juan penninsula (it is only like 3 small blocks!), and you will get to the San Juan Bay. To do this easily, walk down the road to the left of the capitol building and then Turn right at second intersection onto Paseo Covadonga (Route 38) for 1 block then turn left on the road that will lead you to the waterfront.

That will put you at the Bahía Urbana Pier 8 area. where you will find restrooms, a restaurant, fountains, helicopter rides (in season), benches, and a merry-go-round (on weekends). On the weekends, there is sometimes a concert or some festival going on, otherwise it’s a nice place to relax.

You can walk through the park and walk across the bridge, or go along the street around the bay. On the other side of the street you will find a few bars, some shops, and restaurants. As you walk along the waterfront, you will see see the pretty seahorse sculpture, and enjoy the cool breeze in chairs under pergolas. 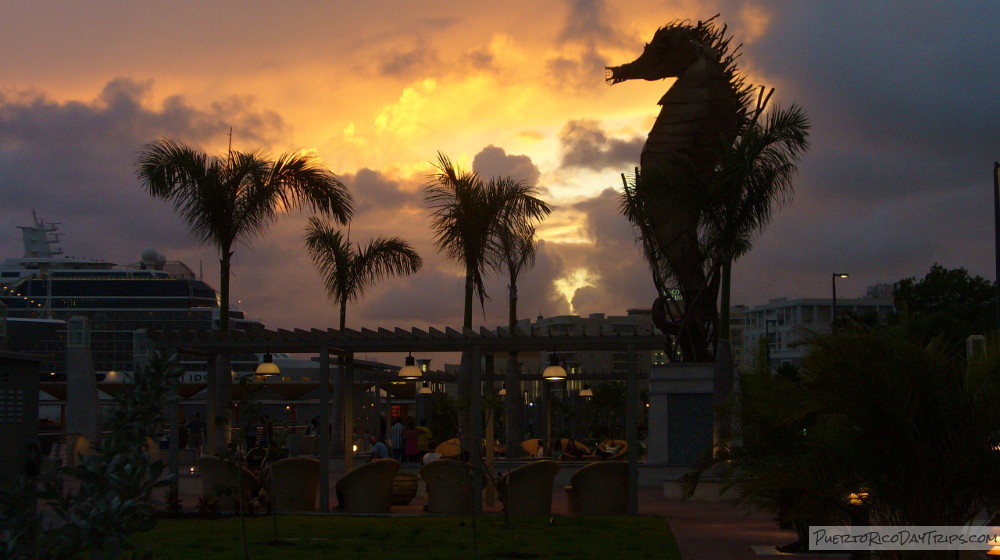 As you continue westward along the waterfront, you will get to the cruise ship piers 3 & 4, and you really can see how gigantic these ships are! Sometimes, an old sailing vessel will be docked between the piers, and they often offer tours. When cruise ships are in port, there will be lots of vendors selling things along this waterfront area.

Across the street you will find many stores and outlets. As you come to the end of this road, you are back at the Puerto Rico Tourism Company building.

And that’s the end of our tour, folks. Enjoy Old San Juan!