Not So Usual Sights in Old San Juan 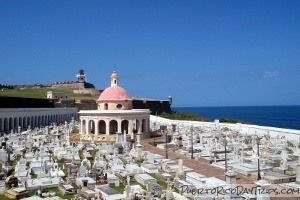 We love visiting Old San Juan — it is so colorful and interesting. One could spend ages there and never run out of things to do, see, photograph, and learn. Some of the most unique and interesting things are often overlooked.

Here are some of the not so usual things you can see in Old San Juan. Maybe you will want check them out for yourself the next time you visit the city!

The San Juan Cathedral contains two interesting dead people. Juan Ponce de Leon has been entombed in a marble tomb the cathedral since 1908.

The more unusual "person" is the waxed-coated, mummified remains of Saint Pius (San Pio), a first century Christian martyr. This holy relic, brought to the island in 1862, is now in a glass box so that it can be seen by all. 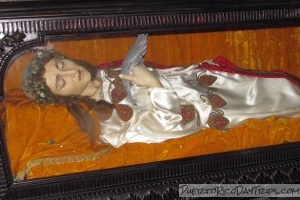 Saint Pius was one of the first martyrs of the Roman persecutions against the Christians during the first century. He was a solider, who was executed for his faith. Twelve popes have taken the saint’s name.

There is a long, hand-written explanation posted above the glass box that tells the story of how the body of Saint Pius came to be in Puerto Rico. Apparently, in 1815 San Juan’s bishop Mariano Rodríguez de Olmedo thought it was important to have a real relic of a Christian martyr in the San Juan Cathedral. The pope gave him Saint Pius, who he took to Spain to have restored. Unfortunately, the bishop returned to Puerto Rico, having forgotten his saint in Spain.

In 1862, when the then-current bishop of San Juan, Pablo Benigno Carrión, was in Spain, someone reminded him that there was the body of a saint in Spain that belonged to Puerto Rico. Bishop Carrión then had the body shipped to San Juan.

In researching for this article, I found other references that say that the Chapel of the Souls in Purgatory contains the earthly remains of Saint Pius. So who really knows? 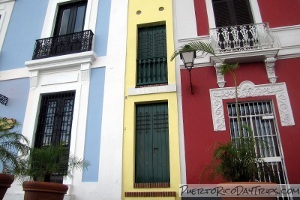 There are two really thin houses in Old San Juan. The first, located at 101 Calle Tetuan, right by Cristo Chapel, is called La Casa Estrecha (The Narrow House). It is only 5 feet wide inside. It was originally the alleyway between two buildings. It is one of the narrowest houses in the world.

The second, located at 152 Calle Sol, is also about 5 feet wide inside.

The Church of Saint Francis (Iglesia San Francisco), built in 1756, contains some beautifully restored reliefs and murals. There is also a large crucifix, called El Cristo de Buen Viaje, that was rescued from a sunken ship off the coast of San Juan. 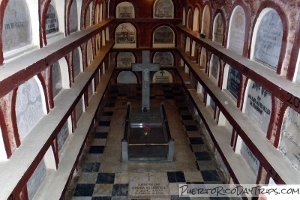 If you go into the basement of this church, you’ll find the catacombs containing the graves of a number of people. Probably the most famous being from the Oller family (as in the famous Puerto Rican painter Francisco Manuel Oller, though he is not buried there).

For some other neat old grave markers, visit the Santa María Magdalena de Pazzis Cemetery, right outside of El Morro. It was built in 1863, and many prominent Puerto Ricans are interred there. But the really interesting thing is all the statuary. I think they must have had a contest for the most elaboration grave markers! It’s may be open 8am to 3pm weekdays and 7am to noon on the weekends, maybe not!.

I have a thing for the forts in Old San Juan. I love exploring all the little nooks and crannies looking for out-of-the-ordinary things. Here are some of my favorites. 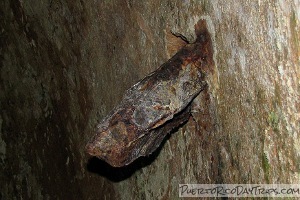 On the lowest level of El Morro, inside the base of the original tower, you will find a big hunk of metal sticking out of the wall. That is a piece of a US artillery shell that penetrated the wall of the fort during the Spanish-American war.

In Fort San Cristobal, everyone has seen the prisoners’ sketches of ships on the walls in the dungeon. But if you go upstairs, above the sleeping quarters, check out the wooden shutters. They contain etchings of ships, words/phrases, dates, and other things. Take the time to look carefully, who knows what you will find. Also check the El Abanico in the out works for some cool, old graffiti. 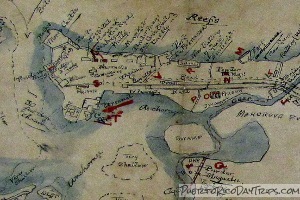 Also in Fort San Cristobal, there are some other things to see that require advance reservations. One is a visit to the San Juan National Historic Site Archives, and the other is a visit to the water cisterns below the fort.

The archives contain a bunch of stuff that has been found in or around the forts during reconstruction. Lots of maps and written documentation, and things like buttons and cannon balls. It also contains a number of other things people have donated, like a suit of armor! One interesting thing is the original map drawn by Captain Henry Whitney on 28 May 1898, that was used in the US Armed Forces attack against the Spanish in Puerto Rico.

We have also had the opportunity to tour the large water cisterns below the fort, which have murals on the walls, which was a surprise. Since they are now in use, I don’t think they still conduct tours to the cisterns.

You will most probably notice loads of cats in Old San Juan. Most are found down by the San Juan City Gate and along the streets in that area. Cats were brought by Christopher Columbus to help keep the rat population controlled. Supposedly, some of the cats you see in Old San Juan are descendants of the Columbus-era cats. 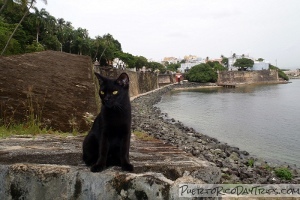 The problem is that cat populations will explode without intervention. Save a Gato (Gato means cat in Spanish) is a volunteer organization that manages the feral cats in Old San Juan by providing food and water. They also have a trap, neuter, and return (TNR) program, during which they also give necessary vaccinations.

They always need donations and supplies. If you are interested in adopting a cat, or just helping the cause, you can contact Save a Gato through our web site.

On the topic of animals, there is a coral/rock formation that has the shape of a sitting dog. It is located on the reef on the side of Fortin San Jerónimo, at the mouth of the Condado Lagoon. It is easily seen from the Dos Hermanos Bridge. 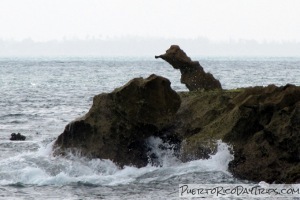 There is an old legend that a young Spanish soldier named Enrique, far from home, felt alone until he adopted a stray dog. He nursed the dog back to health and cherished the dog’s companionship. He named him "Amigo" (Friend, in English). The dog loved him, and all they had in the world was each other.

One day, Enrique had to leave for a battle, but he told the dog that he would return. So the dog sadly watched the boat leave, he even swam away from the fort, to sit on a coral ledge to watch the on the horizon, and then to wait for Enrique’s return. He would swim to there every day, waiting and watching.

One day, the soldiers at the fort found out that the boat sank in a military battle, and Enrique had died. Amigo heard this, couldn’t believe Enrique would not return, swam out to the stone ledge, and sat there waiting with a broken heart. Legend says that the dog sat there for so long that he eventually turned to stone. Update: 2017- Hurricane Maria destroyed much of this rock…cutting the dog’s “head” off. But the dog’s “body” remains.

Many people pass right by the La Princesa without realizing that behind this beautiful exterior lies what remains of a jail.

Cárcel de la Princesa or El Presidio de San Juan was built in 1837. The prisoners did hard labor, making the walls around Old San Juan, working on the forts, and doing building repairs. During the 1930-1950s many political prisoners did time here. Amazingly, it was still in use as a prison up until 1976, when it was forced to close due to the inhumane conditions in which prisoners were kept. 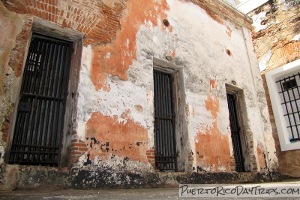 The building has now been beautifully restored, and it is used as the headquarters of the Puerto Rico Tourism Company.

However, if you go through the building and into the back courtyard, turn to the right and go through the narrow passageway, you can find three prison cells that were left as they were when the prison was operational. And if you continue past and behind these three cells, you’ll find a small courtyard where prisoners were executed (by hanging) back in the day.

The Cristo Chapel (or more specifically La Capilla del Santo Cristo de la Salud, located at the southern end of Calle Cristo, is dedicated to the Cristo of Good Health. Built in 1753, the building itself is lovely, but the real treasure is found inside — the altar, and many of the altar pieces, are silver. 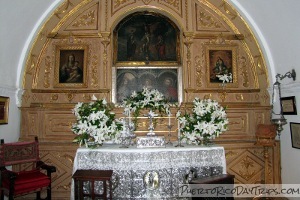 If you have a health issue and want to ask for divine help, or if you want to give thanks for a cure, you would buy the appropriate body-part-shaped pieces of silver and bring it to the church as an offering. These silver offerings are called promesas, ex-votos, or milagros.

Over time, the chapel accumulated quite a collection of these offerings, so they were melted down to create the magnificent altar pieces that are there today. You may be able to find some of these ex-votos being sold from time to time by the volunteers who staff the chapel. 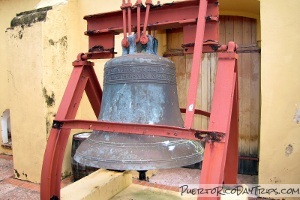 This one took us by surprise the first time we saw it. An exact replica of the Liberty Bell is located in the Polvorín de San Gerónimo in the Parque Luis Muñoz Rivera in the Porta de Tierra area at the east end of Old San Juan.

As it turns out, 55 exact replicas were made in 1950 during a US Treasury department fund raising savings bond drive called the Campaign of Liberty. These full-sized exact replicas were given as "gifts" to every US State, US Territory, and the District of Columbia, to be displayed and rung on patriotic occasions.

There are still some of the original blue cobblestone streets, but these may soon be an unusual find in Old San Juan. 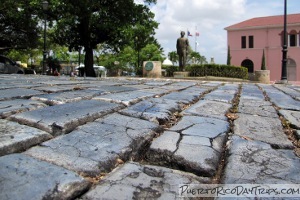 The blue cobblestones that originally paved the streets of all of Old San Juan are now being replaced with new ones. The original cobblestones (adoquines in Spanish) were cast from iron slag, which is the waste from iron smelting. They were brought over from England and were first used as road pavers in 1784.

Beginning a couple years ago, the original, uneven cobblestones are being replaced by modern paver stones. So to see the originals, you can go to Calle Cristo.

Do you know of any other weird, unusual or lesser-known things in Old San Juan? If so,let us know in the comments section below, or on our Facebook page.